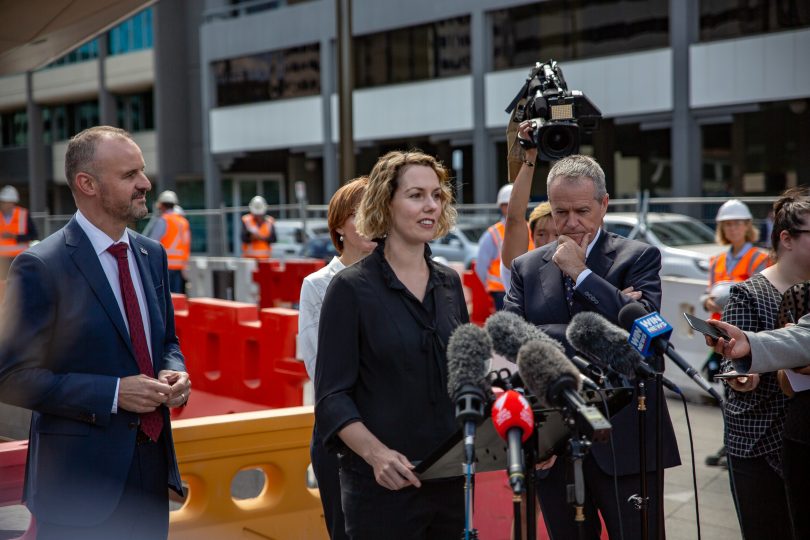 Labor’s Alicia Payne shares the limelight at the light rail announcement in the city with Bill Shorten and Andrew Barr. Photo: Tsotsos.

Now that the phony war is over and the election campaign proper has begun, perhaps the Canberra region’s invisible candidates will emerge from their bunkers.

Or perhaps the limited activity so far reflects that there may be only a whiff of any real contest in the region that may attract the attention of party HQs and precious resources.

Sure, candidates may have been out door-knocking and standing at shopping centre corners, but many have been keeping very low profiles.

Even sitting Liberal Senator Zed Seselja, the target of a concerted campaign from the Greens and unions to unseat him, has limited himself to Commonwealth-ACT funding announcements such as the Monaro Highway upgrade.

And Labor’s Katy Gallagher has hardly been seen, although her return to the Senate is a given.

The exceptions have been the Greens’ Tim Hollo and Labor’s Alicia Payne, the main combatants in the redistributed central seat of Canberra.

Hollo believes he has a good chance in a seat with a demographic that the Greens believe suits them, aiming to emulate the federal and state successes in inner city electorates in Melbourne and Sydney.

He has been reaching out to the media for months, recently bringing federal leader Richard di Natale into the Canberra fray with a national institutions policy that would take back the Australian War Memorial’s half a billion dollars for its massive redevelopment. 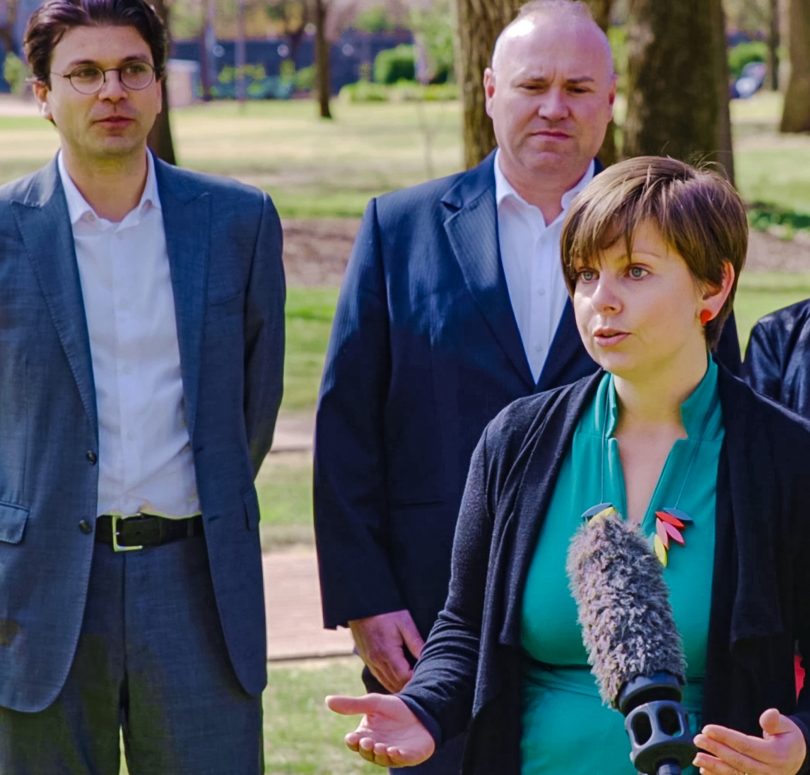 The Greens’ Tim Hollo, left, has been an active candidate in Canberra. His colleague Penny Kyburz is hoping to upset Zed Seselja in the Senate, but the odds are stacked against her. Photo: George Tsotsos.

For better or worse, Labor backs the AWM expansion and Hollo is hoping this will provide some blowback for Payne, who had been out with Bill Shorten at infrastructure announcements such as the $200m commitment to light rail Stage 2, sending the message that the ALP respects the national capital and won’t neglect it like the Coalition.

Veteran poll watcher Emeritus Professor of Politics John Warhurst agrees Hollo had done a good job in raising his profile and involving himself in public debates but does not see the Greens upsetting the status quo in the ACT, in the seat of Canberra or with Penny Kyburz in the Senate.

“I just don’t think the numbers are there,” he says.

And while the War Memorial expansion maybe one of two or three biggest local issues, it is also a volatile one.

“But it’s a tricky issue. It’s a high-level issue with a lot of subtleties to it that might not appeal to the more general voting public. It’s hard to explain and dangerous when you’re mixing with the returned services community and war culture.”

Which is why Labor may think it is more dangerous not to back it.

For Canberrans, says Warhurst, there aren’t many local issues beyond the treatment of the Public Service, decentralisation of jobs and agencies, and the Coalition’s seeming indifference to the ACT, exemplified in the Budget, although Labor is not innocent when it comes to overlooking safe seats.

“Even with our three or four Labor members we’re still fairly small beer in the national caucus,” he says. 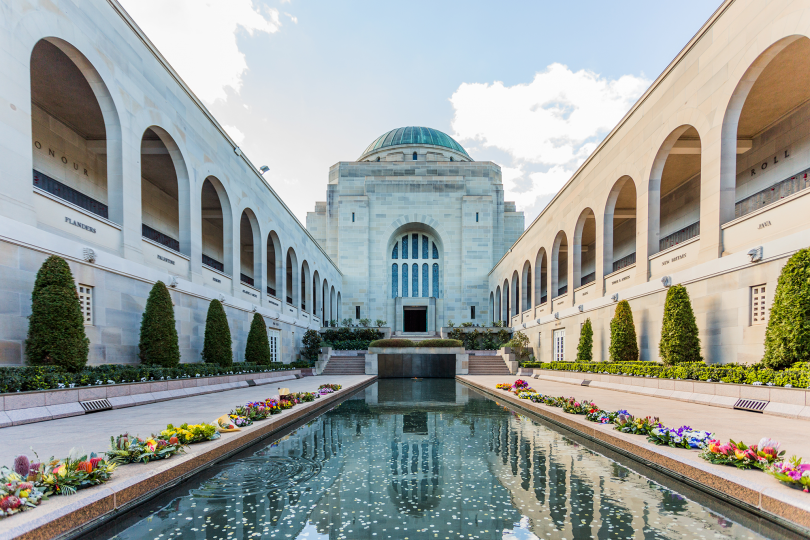 The Greens have dragged the Australian War Memorial’s $498 million expansion into the campaign. Photo: Jack Mohr.

The only other issue is whether voters look to strike a balance, with a Labor-Greens Government in the ACT and a Coalition one federally.

The ACT twist is the tendency of voters to look beyond economics to social issues.

“The sophisticated nature of the ACT electorate and the way it votes you’d think that issues like refugees and asylum seekers, climate change, those sort of non-economic social issues may have particular salience in the ACT, hence the relatively big vote that the Greens get in the Senate,” he said.

Warhurst believes there is a lack of flamboyance and high profile around most of the candidates in the ACT – they are either new or a little bit off the radar (or in Andrew Leigh’s case – a bit ‘too intellectual’).

“There is no one to set the campaigns afire,” he says.

But a couple are not without interest, and it is noteworthy that there are women running for party with a so-called woman problem.

In Fenner, Leigh is being challenged by Liberal country music singer and project manager of the Citadel Group Leanne Castley and the Greens’ Andrew Braddock, while in Canberra, Afghan migrant woman Mina Zaki is running for the Liberals.

In the new seat of Bean in the south, now former senator David Smith is vying with the Liberals’ Ed Cocks, a public servant, and the Greens’ Johnathan Davis.

Then there is renewable investor Anthony Pesec running as an independent in the Senate, and a bunch of others who won’t worry the scorers.

But Labor looks pretty secure in the ACT, Warhurst says, as well as in the former bellwether seat of Eden-Monaro with Mike Kelly. As does Seselja. 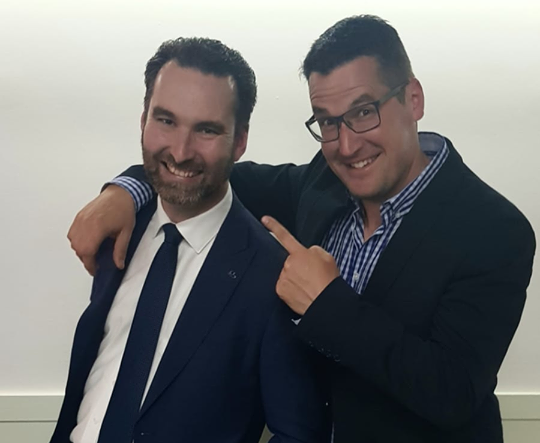 Bean candidate Ed Cocks and Senator Zed Seselja. Hard to see Seselja being knocked off despite him being targeted. File photo.

And at the starting gate, it’s Labor’s race to lose nationally come 18 May.

“After a Budget and five weeks away we stand where we have stood for a while – the Government behind, pretty steadily over a long period of time. They’ve really got to pull a rabbit out of the hat – either self-inflicted wounds by Labor or a misstep by Shorten,” he says.

The Huang billionaire citizenship story, which has touched both the Coalition and Labor, has the potential to hurt the Government more.

“The more time they waste with Morrison and Dutton and Turnbull arguing among themselves just emphasises the different factions, personalities and divisions within the Coalition and that’s not good for them,” Warhurst says.

He says the Coalition has to get to one or two themes where it thinks there is a good story to tell, such as the economy and border control.

But Warhurst fears for the standard of the campaign if the electric car debate is any indication of what is to come.

“It’s the most ridiculous exaggerated so-called horror story. It doesn’t bode well for the campaign,” he says.

“It makes the Coalition look foolish and grasping at straws. That won’t win them an election.”

“Or perhaps the limited activity so far reflects that there may be only a whiff of any real contest in the region that may attract the attention of party HQs and precious resources.”

Unless a bevy of black swans descends upon LBG, or one of our other beauteous water features, the election night “reveals” for the ACT will be –

2. Will the Aslan Army wreak revenge on Zed?

3. Will the proverbial “Tuggeranong pensioners” rise up as one and smite Federal Labor for increasing the likelihood of a southside tramline with its $200m. funding commitment?

It’s really just a case of “ho hum, business as usual”. Doesn’t matter who wins a gig, no federal government takes any notice of ACT MHR’s or Senators. Why should they? The Libs know the majority of ACT voters go with Labor for no reason other than force of habit and Labor takes them for granted. The Greens don’t matter one way or another, they are bankrupt virtue-signallers, have never contributed anything of value to Australia. 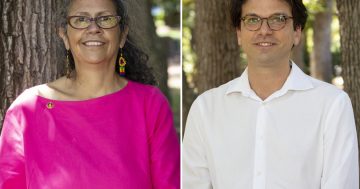