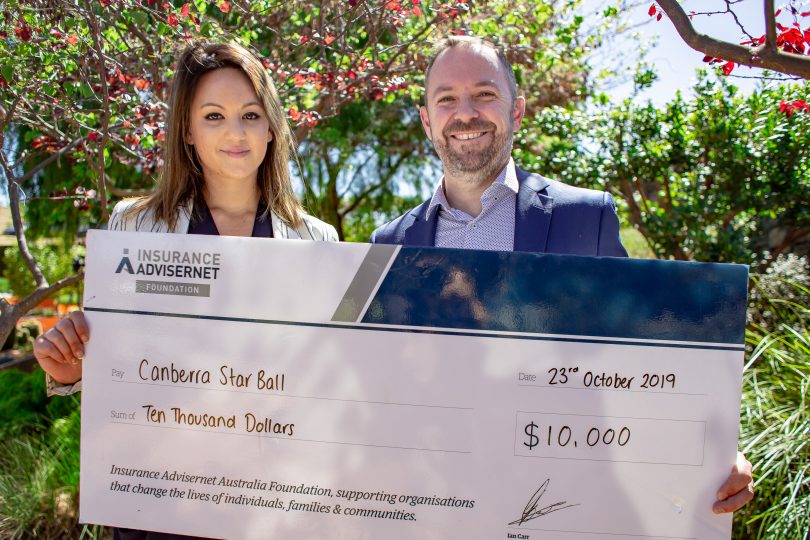 Claudia Vannithone from the ACT branch of the Starlight Foundation receives a giant cheque from Peter Chamberlain of Allinsure, a longtime donor. Photo: George Tsotsos.

For Canberra businessman Peter Chamberlain, there’s no better way to engage with the community than by giving. And if that involves a giant cheque for children going through the toughest of times, then all the better.

“At the end of your life, do you want to be known as someone who ran a great business? That’s OK. What about someone who raised a great family? Well, of course. But to be remembered as someone who gave more back to others and did something better for the community – that’s the key focus for everything we do.”

The $10,000 cheque he’s just presented to the Starlight Children’s Foundation will go a long way towards their work with desperately sick kids, many of whom are enduring painful and difficult treatment.

The Starlight Children's Foundation Australia makes a huge difference brightening the lives of families affected by kids with serious illness. It's thanks to generous Canberra donors like Peter Chamberlain from allinsure that the foundation is able to continue its life-changing work. Here's Genevieve Jacobs with a very special presentation to the children's charity.

Captain Starlight performers are professionally trained to connect with dance, music, art or performance, and help sick kids through their most challenging moments.

Peter Chamberlain is one of the ACTs most generous supporters. He’s been involved for around 10 years after being tapped on the shoulder by Margaret Job, who brought the charity to Canberra after realising local kids rarely got the same opportunities offered to those in bigger cities.

“I have a couple of daughters who were young at the time and I could see what a fabulous cause it is,” he says. “We bought a table for the ball and it’s gone from there.” He recently met the local Captain Starlight performers, too.

“I’ve been brought up to believe that its incumbent on those who enjoy some kind of success or privilege to give back,” he says. “We’ve translated that into the workplace at Allinsure where we give people the opportunity to volunteer their time as well as money for the charity of their choice.

“It builds a great culture within the office. Culture starts from the top and filters its way down in any business. You need the right fit and the right team, and that goes through everything from the leadership team to the way we treat our customers, to how you treat others in the community and what you can do for them.”

In a town the size of Canberra it’s also perhaps inevitable that you’ll meet people who have benefited in some way from that giving culture. Peter founded and ran the CBR Brave ice hockey team and recently learned that the team’s coach had used a wish for a seriously ill child.

Claudia Vannithone received the cheque on the Starlight Children’s Foundation’s behalf and says that local generosity makes an amazing difference to effective fundraising here in Canberra.

Since 2006, the ACT has raised close to $3 million. Unlike almost every other Starlight Foundation event around the country, the Canberra ball is close to cost-free thanks to very generous donations including the food and alcohol and a significant contribution from Ginger Catering at the Arboretum.

“Our model is pretty much unique”, Claudia says. “The donations mean that a great majority of funds go straight to the Starlight Foundation and programs here in the ACT. So many locals and businesses get behind us with in-kind support and we appreciate that deeply”.

Ashley Wright - 4 seconds ago
Jennie Smith vast majority of the tram works were done in the median strip of flemmington road with minimal impact. There was... View
Property 3

sisyphus - 1 hour ago
Better still, read some up-to-date peer-reviewed research. That film is primarily attacking historical straw men, presenting... View
jwinston - 8 hours ago
Watch “The Planet of the Humans”, a documentary by Michael Moore, to see the lie of renewables and so-called green energy... View
News 4

Robert Hawes - 1 hour ago
Should be done via the nurse walk-in centres. View
Lyn Christie - 7 hours ago
Ian E Wheeler maybe somewhere you can register if you don't see community nurse and are unable to get out to receive the shot... View
Tom Porter - 9 hours ago
Maybe the carer can arrange for the community nurse. It is not prohibitive. Then again the government could contract Aspen to... View
News 20

JC - 1 hour ago
Actually think you will find this “outcome” actually backs up my comments. Do you think both parties came to a $400,000 a... View
chewy14 - 2 hours ago
JC, The other week you were claiming the silence was due to pending litigation which now as we see (and I said) was false. Th... View
JC - 3 hours ago
Life doesn’t work like that. It’s quite clear that for the last year they have been in dispute with the builder over this... View
Community 20

Ben Fittler - 3 hours ago
Germaine Muller I know! Devastated he was always so nice View
Bec Swift - 4 hours ago
RIP Mr Frugii View
Chelsea Adhami - 9 hours ago
Any word on when the funeral will be? View
News 13

Andrew Dale - 6 hours ago
Rory Bourke I'm both mate 🥸🥴 View
Lucas Anasdow - 8 hours ago
The Left are pushing to have the Event Renamed as the Term 'Black' is deemed to offensive and upsetting for segments of the C... View
Rory Bourke - 9 hours ago
These days they don’t call it old, they call it experienced. View
News 3

Chief Minister Andrew Barr has floated the idea of the ACT receiving one flight of international students for every repatriation...
News 20

The developer of the problem-plagued Gungahlin pool has been absolved of liability for building defects, including if further damage or...
Community 20

Businesses advised: now’s the time to be pragmatic and proactive

@The_RiotACT @The_RiotACT
Joshua Higgins has pleaded not guilty to murdering Gungahlin man Jae-Ho Oh after a late-night fight on Canberra Day 2019. Please be careful with your comments, this is an ongoing trial https://t.co/iEO6xJF7hL (1 hour ago)

@The_RiotACT @The_RiotACT
Human remains found at Mollymook Beach on 26 February have been confirmed to belong to 37-year-old Kenneth Klees from Ingleburn in Sydney’s west https://t.co/hzlrVBomXQ (2 hours ago)