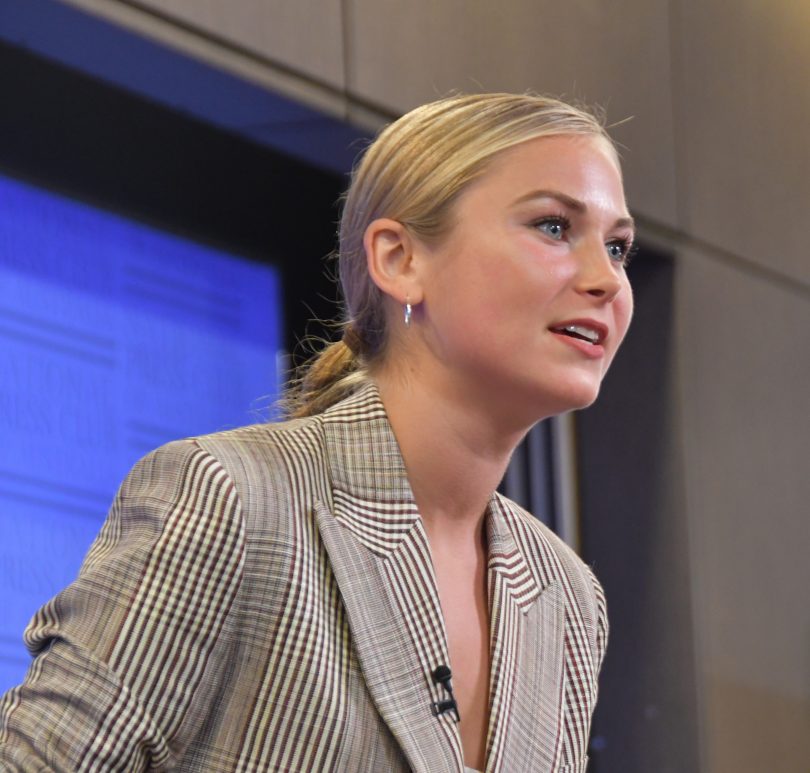 Grace Tame, who inspired a Canberra woman to speak out about abuse, talks at the National Press Club. Photo: NPC Twitter.

A Canberra woman who tried to escape a volatile relationship only to be lured back and raped by her partner says she was inspired to speak out about the abuse by Australian of the Year Grace Tame.

Court documents show in 2019 her partner was sentenced to jail for eight months after assaulting her, but even while he was in prison they stayed in contact.

Once he was released, he promised he would never hurt her again and that she would always be safe with him. They resumed their relationship.

But his controlling behaviour began to escalate until March 2020 when she decided to leave him. After he left for work one day, she packed her belongings and took a taxi to a hotel in Phillip where she paid for a three-week stay.

But after she arrived he sent her numerous texts, such as “Baby plz no I’m a mess why r [you] doing this”.

Hoping his remorse was genuine, she went back to the unit for a short visit.

READ ALSO ‘Rape is not a relationship’: abuse survivors reinvigorate debate over wording

But the man accused her of taking drugs, slapped her in the face and grabbed her by the front of her jacket then thumped her up and down on a bed for about 10 minutes. He then raped her.

On Thursday (3 June), the woman told the ACT Magistrates Court Ms Tame had said “evil thrives in silence”, and silence was how she endured the abuse at the hands of her partner.

She said her voice needed to be heard for the true damage against her to be understood.

“I was trained to be something less than myself and that is still with me,” she said.

The woman said she had been judged, told she was stupid and that she should have been able to tell what her former partner was like.

“I will never be the same person I was when I met him; I am forever changed,” she said.

“I don’t want to have gone through what I have suffered for nothing.

After the woman had finished speaking, one of the man’s supporters hissed in the court’s gallery: “Have you ever heard such bulls–t?”

The man, 40, pleaded guilty to sexual intercourse without consent and contravening a family violence order on the second day of his trial.

Prosecutor Keegan Lee told the court the man had “lured” the woman back to him with promises that he would change and would not hurt her again, but became aggressive immediately after she arrived.

Justice David Mossop said the case was a “disturbing example of domestic violence”.

“[The rape] was an assault designed to denigrate the victim,” he said.

He said it involved digital penetration and, while relatively brief, was designed to be humiliating and degrading.

Justice Mossop jailed the man for at least two years and four months. He will be eligible for release in April 2023.

“But the man accused her of taking drugs, “