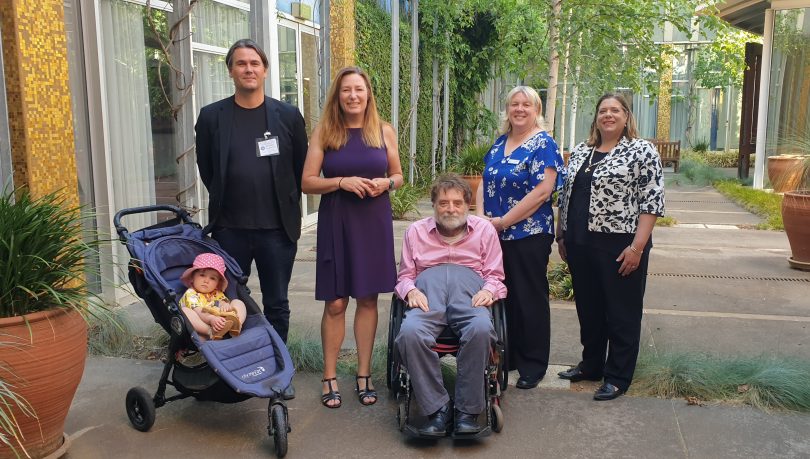 It says a lot about the ACT’s rental market that an income of $100,000 is not considered enough for many Canberrans to put a roof over their heads.

Catholic Care Canberra and Goulburn is one of six organisations to share in grants worth $645,000 to provide more affordable housing in Canberra. The project is aimed at the first and second quintile of incomes, up to $100,000.

CEO Anne Kirwan said a project to design and build 6-8 units targeted at women aged over 50 and people with a disability will include an income cap of $100,000 for applicants, which she says sounds like a lot but not when you’re renting in the ACT market.

“It’s amazing that people on $100,000 are finding it difficult to access housing in Canberra but it’s the most expensive place in Australia to rent and we want to be part of the solution,” Ms Kirwan said.

CatholicCare has received $50,000 to identify under-utilised Church land that is zoned for community facility use. It will pay consultants Colliers International to manage the complex zoning and land use rules, and Cox Architects to design energy-efficient buildings that make the best use of the land.

Ms Kirwan said CatholicCare hoped to develop a viable model for affordable and supported housing in the ACT. Rents for the affordable component would be set at 75 per cent of the market rate.

The organisation is also partnering with Housing ACT in the recently launched Housing First initiative which over two years will assist 20 long-term homeless people with complex needs into permanent homes.

One man who has been sleeping rough for 20 years is now housed and CatholicCare has a group assessed through Vinnies’ Street to Home program ready to be alotted homes.

The second-round grants announced on Thursday have been sourced from the Affordable Housing Innovation Fund.

It plans an affordable rental apartment development in Belconnen with 80 micro terraces offered to people on lower incomes (with an annual review of eligibility) at a rent capped at 20 per cent lower than the average market rate. The development will include eight accessible units offered to tenants with disabilities also at 20 per cent below market rent.

YWCA for YHomes has also received $125,000 to help deliver supportive housing for older women on an under-utilised block in Ainslie.

Summer Foundation Limited ($35,000) will assist 20 people with disability likely to be eligible for Specialist Disability Accommodation in the ACT to complete a new housing needs tool. The results will be aggregated and analysed, and a briefing paper will be prepared with recommendations.

Rights and Inclusion Australia ($90,000) aims to reduce housing stress among people with disability in the ACT by increasing information about and identifying a range of suitable housing options available to this population.

Community Connections (Homeshare ACT) received the biggest grant at $220,000 for a project to establish a model aimed at matching homeowners with a spare room with low-income tenants seeking affordable rental accommodation in exchange for providing assistance around the home.

The Government says Housing ACT is also providing an additional $6.524 million in funding to support frontline services and address gaps in its homelessness service system.

It has extended the operating hours of the Early Morning Centre to enable the delivery of additional services and activities to improve guests’ social skills, social inclusion, and health, job and educational outcomes.

It has boosted funding for the Doris Women’s Refuge, Beryl Women Inc, Toora Women Inc and Karinya House for Mothers and Babies Inc to support greater stability for women and children escaping family and domestic violence, and to prevent children from entering child protection and reduce the impact of intergenerational homelessness.

Two new homelessness services have been launched in the past year. One supports older women into affordable housing options in both public and private sectors, operated by the YWCA; the other is for asylum seekers and people with uncertain immigration status, operated by Migrant and Refugee Settlement Services (MARSS).

Over the next five years the Government will spend $100 million on the renewal of at least 1000 public housing properties as well adding 200 homes the portfolio to help with the waiting list.

Lesley Howden - 2 hours ago
Wayne howden View
Dianne Gilbert - 4 hours ago
Lauren Rogers I remember your Business excursion! View
Olympia Muir-Williams - 10 hours ago
Molly Salim as the person who brought frugii into my life i want to grieve with you View
Food & Wine 7

stargazer - 3 hours ago
I grew up listening to my mum chin wagging to Anne for ages and eating their custard tarts and vanilla slices! Us kids called... View
tr0jan - 12 hours ago
I grew up in Narrabundah, Danny’s bakery has been there as long as I can remember and our family have been enjoying the del... View
sebastiancampbell - 14 hours ago
I think that the traditional atmosphere and service in Danny’s is fantastic. It is something that is sadly lacking in the f... View
News 13

Gabriel Spacca - 8 hours ago
By 2027 I hope to be able to retire and move to a community that is less at the whim of developers. View
Capital Retro - 10 hours ago
"by 2045 there won't be anyone car maker in the world still making petrol vehicles, and a good thing too." Remember "peak pet... View
Tom Adam - 11 hours ago
And yet we keep pointing out that Mawson is a much better terminus for stage 2B to remove bus trips of 1 stop for thousands o... View
Sport 33

Caroline Le Couteur - 10 hours ago
Good work View
Natalee George - 13 hours ago
Louise Bilston you definitely were a big part of me getting back into coaching 💙💚 View
Louise Bilston - 13 hours ago
Thanks Brendhan! NACT couldn’t ask for a better Chair for their FARM committee. You have big shoes to fill following Scott... View
Opinion 4

cockneyreject - 11 hours ago
There’s a lot of good down here in Canberra but there is a certain insularity and in some ways management is a generation b... View
Property 4

c j - 15 hours ago
Indeed. Completely overlooked the negatives and displacement that this will bring thousands of Canberrans View
News 11

The owners of the Zoo Bar and Grill are taking Canberra's nightlife to the next level by launching the Mile High...
Community 14

The Canberra bubble proved itself to be an opaque and murky edifice as it settled over Parliament House last week....
Community 19

Roasted garlic ice cream, pistachio and cherry essence, spearmint and salted caramel - these were the ice cream flavours that...
News 13

@The_RiotACT @The_RiotACT
Darrell Weekes has spent his career at the top end of town, and he brings all his experience to his role as president of the Goulburn Chamber of Commerce https://t.co/oPhvBYf2Tf (1 hour ago)

@The_RiotACT @The_RiotACT
Relax with rhinos and giraffes as the @national_zoo & Aquarium offers a series of unique morning yoga classes among the animals https://t.co/qIekMt93ot (11 hours ago)