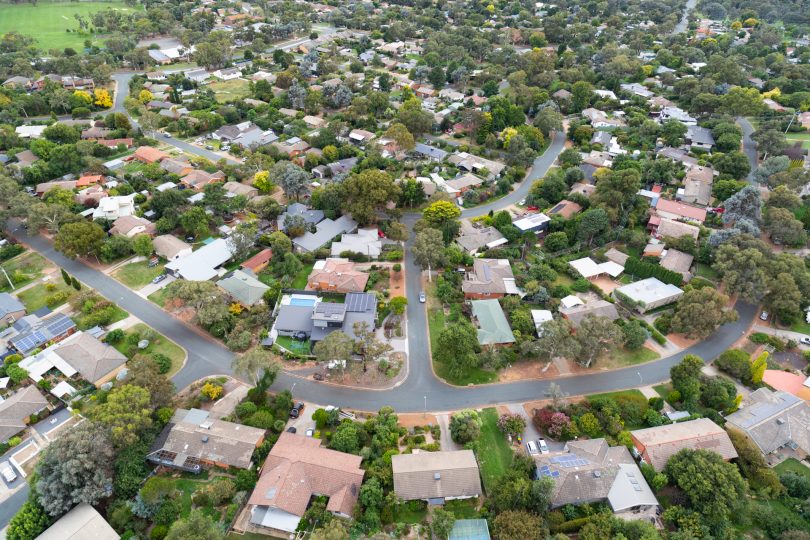 Home prices in Canberra are retreating as interest rate rises bite, but the local market’s innate strengths should rule out the kind of crash that might affect other areas in the country.

The latest CoreLogic data shows an overall drop of 1.1 per cent in prices in July, down from the rise of 0.3 per cent in June.

Nationally, home values fell by -1.3 per cent in July, marking the third consecutive month CoreLogic’s national Home Value Index has fallen, a situation not seen since the global financial crisis in 2008.

After national dwelling values surged 28.6 per cent through the pandemic, values are now -2.0 per cent below April’s peak.

House prices fell -1.4 per cent, and units and townhouses just -0.2 per cent, confirming a weakening market as the Reserve Bank acts to counter surging inflation.

On Tuesday (2 August), the RBA is expected to add a further 0.5 per cent or 0.75 per cent to its cash rate, squeezing mortgage holders and forcing potential buyers to reassess their budgets. 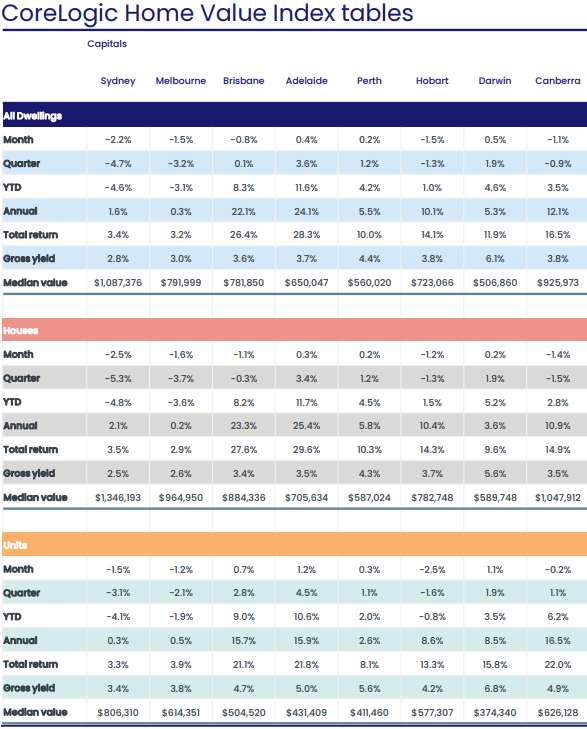 The price falls in Canberra hardly touch the extraordinary gains of about 30 per cent that property owners have enjoyed in the past few years. The rate of increase has slowed in the past year to a still-healthy 12.1 per cent. The year-to-date figure for all property types growth has only been 3.5 per cent.

Canberra remains the second-most expensive capital city market after Sydney with a median price of nearly $926,000. Median house prices are still over the million dollar mark at $1,047,000, while units are about $626,000.

“You’ve got stability. You’re not going to have the peaks and troughs that you can get in other markets where employment or wages could be affected because of economic conditions,” Mr Smith said.

“Interest rates have caused lending capacities to level out or drop slightly, but we don’t have a situation where there are people out of work in the ACT.”

Mr Smith expected interest rates to go up another 1 or 1.5 per cent but peak next year when the Reserve Bank would have to reassess the long-term impact on the economy.

He said that with the heat going out of the market, properties were selling to expectations rather than exceeding those at auction, as had previously been the case.

“We’re not having the same amount of inquiries and people through open homes, and bidders that are registered at auctions have just dropped to a point where effectively the properties are selling at or very, very close to what you would expect them to,” Mr Smith said.

“You’re not getting the price record blowout or a price record set in every suburb at every auction as we had for the previous 12 months.”

Mr Smith said the speculators common to a rising market had vacated the scene to owner-occupiers who should look to the long term.

“The people who still need to buy a property to actually live in it, or they’re looking to upgrade, or they’re moving for a reason to live in the property, those buyers are still there,” he said.

He added those people were usually buying for the long-term, and the vagaries of interest rates and price fluctuations now would not affect increases in values expected over 10, 15 or 20 years.

READ ALSO Another month, another rate rise: can the Reserve Bank avoid a crash landing?

The traditional spring selling season would bring only a slight rise in the number of properties on the market.

“There will be an increase, but I don’t see that being the dramatic increase and I wouldn’t see it having a major effect on the market,” Mr Smith said.

“You might just see clearance rates at auctions drop a little bit because the buyer pool can now look at and assess more properties. But in general, there won’t be a wholesale drop in their market values of the properties in Canberra.”

Mr Smith expected the low supply of detached houses to continue to support prices, and first-home owners would be looking at affordable units and townhouses, while unit investors would continue to benefit from low vacancy rates and strong rental returns.

“This trend is most apparent across the three largest capitals, as well as Canberra, where housing affordability challenges may be deflecting more demand towards the medium to high-density sector,” Mr Lawless said.

“Additionally, firmer interest from investors should favour the unit market over houses where demand has historically been more concentrated.”

His advice to buyers in Canberra would be to buy with confidence, especially for the long term.

“If someone finds a home that they’re comfortable to live in for 10 or 15 or 20 years, then they should strongly consider buying it,” Mr Smith said.

“Buyers are probably a little fortunate now that they’ll get a little bit more time to make decisions and probably have a couple more options that they can choose from.

“The buyer-seller market is a little bit more level. But if they find something that they liked, I wouldn’t be worried about the last $10,000 or $20,000 on a price in either direction because it’s a long-term investment.”

‘Spectacular’ growth? I’m stunned by the enduring willingness of all commentators to paint the increase in property prices as a positive.

‘Spectacular’ growth? I’m stunned by the enduring willingness of all commentators to paint the increase in poperty prices as a positive.

Lower price doesn’t make the housing more affordable, if the interest is high.