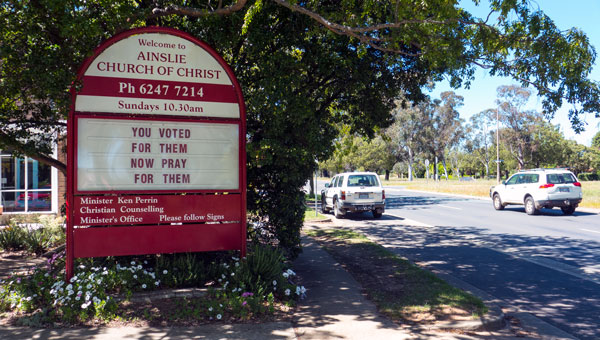 We were driving along Limestone Ave when the Ainslie church sign came into view. It is regularly changed and sometimes takes a minute or two to comprehend.

On this occasion there was a silence for a second – then we all burst into laughter. I am not sure if that was the reaction that the sign creators had aimed for but it was the uniform reaction from this group (see the sign above).

The ACT election was indeed an interesting one. As 2016 progressed it was obvious that Labor could have been in trouble if there were attractive alternatives.

Several months ago I could sense that the Liberals had lost it. Their negative campaign was not going to turn any voters around in that middle ground of changing votes. I suspect that many minds had been set in response to recent negativity of Federal campaigns and people were not about to risk having a similar conservative government run amuck in their home town. 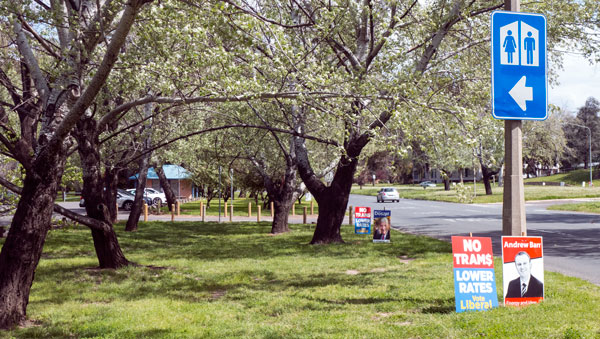 A lot has been said about the so-called ‘ground games’. I remain sceptical of the real value of these. People will say anything to please the poor sod standing at their front door. The real vote changer for many people is rather more nuanced.

Trust was a big factor. But even here I doubt the efforts by many who tried to make it more personal – such as holding babies or being photographed with children (anyone’s).

My response to all that family stuff was negative. I could not help but say please keep the kids out of this and stop telling us about your wonderful family histories.

I suggest many of us would rather candidates kept it simple, were clear on their visions for the city and about what separated them from the large crowd of other candidates. And I still ponder about the candidate who used her RAAF bomber experience to prove that she delivers as required.

I did favour some of the independents this time around. Sadly I did not think they had much chance. I felt that they needed to have been out there much earlier to have gained recognition by a much wider part of the electorate than their home front – usually local community groups.

I believe that the Labor/Greens coalition deserved to win and this was based on both parties having a full suite of positive policies. However on suburban, planning and development issues, like many others who have experienced the terror of the Chief Minister’s version of ‘Urban Renewal’, I felt on this alone Labor deserved to be shown the door.

Sadly for the Liberals they offered few realistic positive solutions on planning and development to counter the damage Labor had self-inflicted. As for the crazy ideas for Northbourne (bike paths down the middle) and the opening up of the Civic plaza for cars – no one with any knowledge of urban issues took them seriously.

That awful blackmail over new hospitals was atrocious and someone in the Liberal team should be ashamed of having thought up that ‘brilliant’ idea. As it turned out it was brilliant for Labor.

Since the election there have been decisions to place changes to planning and development well and truly on the agenda of the new Labor/Greens coalition. Underpinning any new initiatives must be the willingness to address the loss of trust the former government suffered on so many occasions.

Federally it has been identified that there are hundreds of lobbyists registered to pound the corridors up on the hill. The Federal coalition government is a prisoner of these lobbyists who have constructed an alternative bubble/reality around the decision-makers within government.

Locally we have the equivalent whereby a small section of the business community, mostly the property industry, are now consistently in the ear of our elected ACT politicians. Any change to this culture must come from the politicians themselves.

We are lucky here in Canberra to have a good number of new members. One piece of advice for them is to stay engaged with and to stay close to your communities. Please keep a hold of reality by not allowing the small group of vocal lobbyists to dominate your thinking from day to day. People (residents) should be first in your thinking.

What I am suggesting is that our elected folk should be quietly and regularly attending community meetings and functions – being seen and available informally as often as humanly possible.

That is, do not wait to be invited, just show up – you remain a resident (as well as being honoured as an elected politician) and as such should attend all manner of large and small functions – and listen.

So yes, we should take heed of the church sign and should be praying for our elected politicians and wishing them all the best. They have taken on a huge job just to deliver on all their promises. It is not a job I envy. 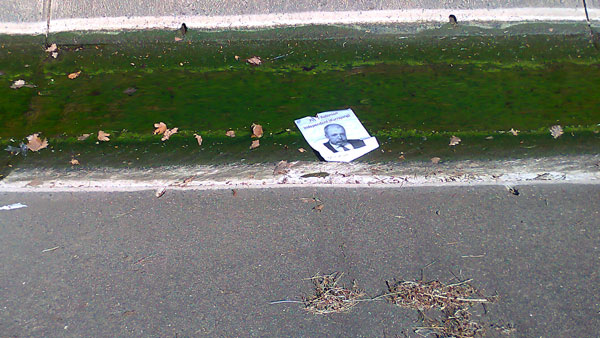 People chose the parties they trusted more. Congratulations to those in the Labor/Greens coalition.

However trust is not big between the local electorate and our ACT Government. It does not have to be this way.

Let’s see what all of us can do over the next four years to rebuild some trust.