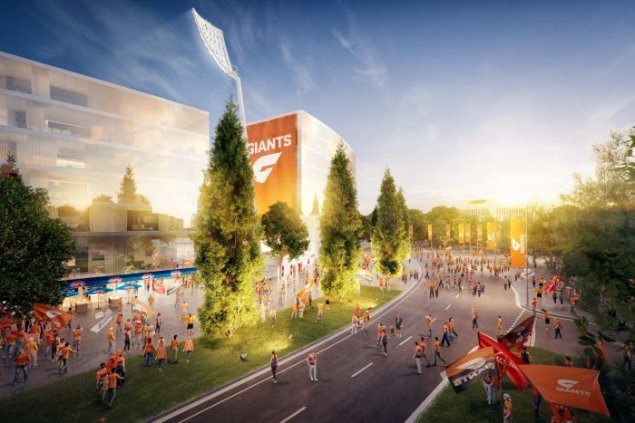 The redevelopment of the Manuka Oval precinct will include fewer apartments than initially proposed and a promise by developers to protect heritage buildings, including the historic Manuka pool.

It was announced on Wednesday that plans to redevelop the area have been scaled back after community consultations by AFL club GWS Giants and developer Grocon.

Under the plan now being considered by the ACT Government, the Giants and Grocon would spend $100 million upgrading Canberra’s Manuka Oval in exchange for being allowed to develop property in the area.

The revised bid includes 650 new apartments, down from the 1,000 originally envisaged, 270 more parking spaces than the first proposal, and a guarantee that heritage buildings in the area would remain untouched.

“We’re here to suggest and to demonstrate to the community and all the stakeholders that we have in fact listened.”

Grocon representative David Waldron said although some elements of the proposal had been scaled back, works to upgrade the oval itself would not be affected.

“The fundamental importance of the proposal … is to develop land around the oval to allow an upgrade of the oval,” he said.

“That is an absolute given – whilst the project has changed in extent, that given has not.”

Spencer Hunter - 6 hours ago
Matt Wecker boys could be on here View
Sarah Watt - 7 hours ago
Anthony Billy Watt I’m sure you’re across this... View
Larissa Hutchens - 8 hours ago
Marshall Amelia they definitely would. Tim could take them 😝 View
News 29

Lloyd Woodward - 6 hours ago
Stop with this boomer thing. Im apparently a Boomer, but think this is a great idea. He is just a sad Panda.... View
Robert Azzopardi - 14 hours ago
I think it strange that comments here suggest that scooters and their riders are the problem but not cars and their drivers.... View
Property 20

Rob Thomas - 9 hours ago
Kir not only that I have my own oxygen tank and mask. I've be arguing for a further discount as I'm not using the buildings a... View
Kir Rin - 10 hours ago
Rob Thomas do you potentially pay for other things that others may not? Do you have a separate entry? View
HiddenDragon - 11 hours ago
Another great thing about electric vehicles is that they're exempt from those old-fashioned rules about parking between the y... View
News 21

Sue Jameson - 9 hours ago
That’s a job!!! View
Lesa Hallissy - 11 hours ago
It needs all the help it can get View
Sport 9

Rosemary Braiuka - 14 hours ago
You DO realise you are misinformed don’t you? View
Business 1

Luke Malacchi - 14 hours ago
Bill Caddey....prime for a bloke with a railbike View
News 2

A government speed detection van on Canberra Avenue has been shot at in an apparent drive-by attack, police said. An...
News 29

Former Liberal Chief Minister Kate Carnell, who formed government in 1995 and again in 1998, says that it's time for...
News 29

@The_RiotACT @The_RiotACT
After a huge week in ACT politics, our newsletter wraps up the topics that had readers talking https://t.co/bozjQLVeve (7 hours ago)

@The_RiotACT @The_RiotACT
Josh Tonna may have lost his world title fight but he's walked more than 330 km in quarantine in his hotel room raising money for Lifeline https://t.co/iEaIwTzinO (8 hours ago)

@The_RiotACT @The_RiotACT
How would you like to own a home that’s more like a 5-star country resort? This Murrumbateman property is the perfect place to snuggle up, wind down & rest up https://t.co/0D5XD98NSv (9 hours ago)