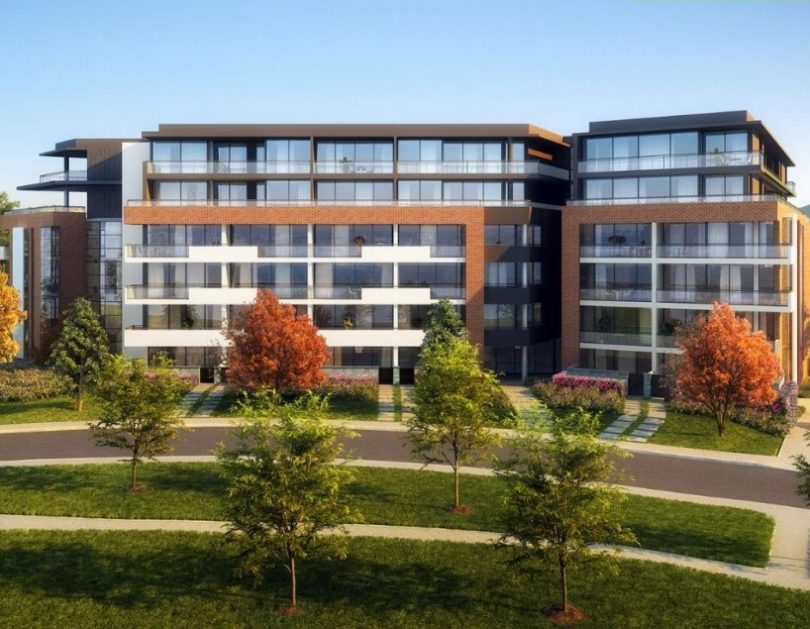 Morris Property Group has lodged plans for all three stages of its $133.6 million redevelopment of the former Stuart Flats site in Griffith into an integrated multi-unit residential complex of 412 units.

MPG bought three of the four blocks (Blocks 23 and 24 Section 39, and Block 6 Section 39) that comprised the Stuart Flats and plans a three-stage development with three levels of basement parking.

The DA, prepared by Elton Consulting, says the proposed development has strong integration with the surrounding public realm including improved access between the Light Street Park and the Manuka Group Centre.

It says the project is informed by the area’s geographic character and architectural heritage, including the use of building materials and fabric that reflect the local design context, such as references to the ‘Canberra red’ bricks. 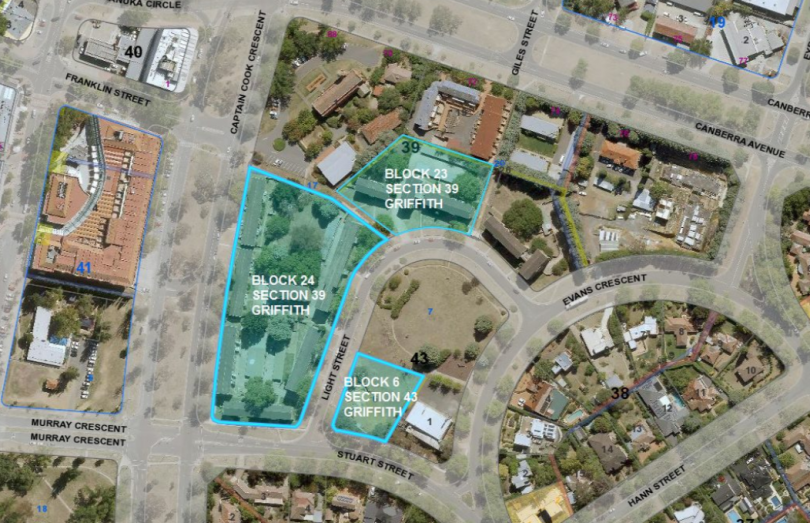 The site the Stuart Flats redevelopment.

The proposed development has strong integration with the surrounding public realm including improved access between the Light Street Park and the Manuka Group Centre, and shared lobbies in each buildings and gates to private courtyards provide pedestrian access at street level.

Dwellings are generally larger than typical apartments in the surrounding area with well-proportioned balconies and terraces and a high proportion of apartments with three or more bedrooms.

The two non-residential uses are located on Block 24, with the four-practitioner health facility on the ground floor of the northern-most building, fronting Captain Cook Crescent, and the childcare centre towards the south.

The DA says the childcare centre has direct ground floor access from Light Street on the eastern boundary of the block. An outdoor play area is located within the central landscaped area.

It says the three sites have been designed as a precinct, with consistent architectural features and finishes.

“Buildings are arranged to maximise street frontages, existing trees to be retained, views to Light Street Park, and solar access,” it says.

The proposed six-storey building on Block 23 fronts Light Street but appears as seven-storeys from the rear due to the slope.

North-west perspective. Dwellings are generally larger than typical apartments in the surrounding area.

The lower ground floor contains the first level of basement parking and does not include any habitable space.

Block 24 contains five individual buildings of varying heights, the largest of which occupies the southern portion of the site and has frontages to the Captain Cook Crescent, Stuart Street and Light Street.

The four remaining smaller buildings are located along the eastern and western boundaries of the site, fronting Light Street and Captain Cook Crescent.

The development includes 759 car parking spaces, including those for for the childcare and medical centres plus about 60 kerbside spaces, in excess of the 717 required, according to the traffic report. There will be storage spaces for 459 bicycles, as well as four spaces each at the medical centre and child care centre.

It will be accessed primarily off Captain Cook Crescent with two driveways on Block 24. Block 23 and Block 6 will have two separate access points from Light Street.

Waste vehicles will have a separate access point to Block 24 from Light Street where there would be one collection point for both residential and commercial uses from Block 23 and Block 24. Kerbside waste collection is proposed for Block 6.

Traffic generated would be 372 vehicles in the peak morning period and 364 in the afternoon peak, 58 and 50 respectively for the child care centre and 46 each for the medical centre.

The company hopes to begin construction on Stage 1 in February, for an 18-month build.

Coincidentally At the same time, the ACT Government lodges a $133 dollar plan to upgrade the ash tray facilities for the outer Tuggeranong Houso’s that used to live in Griffith but were shipped out to the burbs.
Just when did Labor forget about its social welfare roots and start focusing on shiny facilities and toys for the key Ministers electorate and on making property developers wealthy?

The end of an era!

Justin Evans - 1 hour ago
Lights, bells and even boom gates aren't going to stop someone if they aren't watching the road View
John MacCallum - 7 hours ago
All level crossing collisions are avoidable. It just takes people to drive appropriately and not be complacent. See and avoid... View
Scott Turnbull - 7 hours ago
Layla Barry Tragic as these accidents are, it is simply not practical to place lights and bells at every single level crossin... View
News 1

ChrisinTurner - 2 hours ago
More people would use the bus if it didn’t get stuck in the same traffic jams. A bus lane is needed urgently. View
News 11

Dean Carlson - 4 hours ago
Don’t let a noisy minority say they're talking on behalf of the town. This school is desperately needed and the proposed si... View
Kristy Norwood - 5 hours ago
I am 100% for the high school and it's location, as for the park it's government owned and they will do as they need, if they... View
savebungendorepark - 18 hours ago
We should be clear. This isn't about "us against them". Virtually everyone who's campaigning to save the Park supports a high... View
News 8

rationalobserver - 4 hours ago
Shooting is is the most humane and target-specific means of rabbit control available. It can be done quite safely inside sett... View
Stephen Saunders - 5 hours ago
In O'Connor, the worst infestation is along the Centenary Trail, at Bruce and O'Connor Ridges plus adjoining Nobby's Farm. Th... View
Lifestyle 1

Acton - 4 hours ago
Walking or running is healthier and safer for everyone. The worst thing about scooters are the many near misses and dumping o... View
News 54

Juliet Lautenbach - 18 hours ago
Meryl McKerrow I’m actually agreeing with you regarding those who cause the crashes. What I’m saying is that the slower s... View
Pete Notso Fatso - 19 hours ago
Once upon a time cars were sold on things like “power assisted disc brakes” or “RTS”. Nowadays it’s Apple CarPlay a... View
Steve Jones - 20 hours ago
Richard Watts that was on a straight bit of road........ View
Lifestyle 1