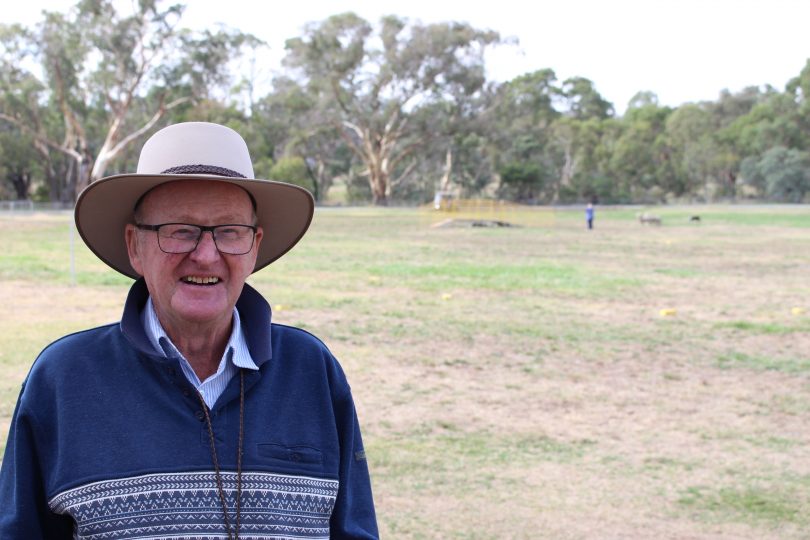 Women are making their presence felt at the National Sheep Dog Trials underway at Hall Showground, 25 minutes west of the Canberra CBD.

President of the Trials Association, Charlie Cover says 41% of entries this year came from female handlers.

“Its a record for us and I think it might also be a world record,” Charlie says.

“Women’s sport, in general, has absolutely exploded this year – AFL, soccer; and we are now apart of that.

“Men and women compete on an equal playing field, physical strength has nothing to do with it,” he says.

Fifty-five handlers from around Australia will send 300 mostly Border Collie dogs around the bush showground between now and Sunday (March 18). Spectators are welcome to find a perch in one of the shady grandstands every day.

“You can even bring your pet dogs, please just keep them on a lead,” Charlie says.

2018 marks 75 years of sheepdog trialing in the ACT. The sport was born during the dying days of World War 2 and a need to raise money for the post-war work of Legacy.

Those early days played out on Manuka Oval led by George Westcott, a community-minded public servant.

“I’d like to have a go at running this on Manuka Oval next year,” Charlie laughs. 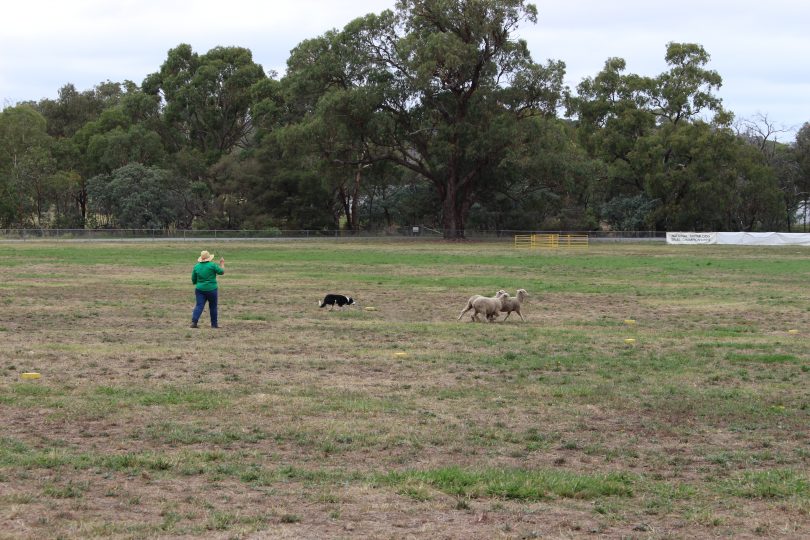 The National Sheepdog Trails are being held at Hall Showground, March 14 to 18. Photo: Ian Campbell.

The skill of sheep dog trialing is a balance between control and threat and working with the natural herding instinct of the dogs.

“One is a hunter and one is hunted, so there’s a natural mistrust from the sheep towards the dog,” Charlie says.

“The handler has got to get those sheep accepting the dog as a guiding rather than threatening force.”

Spectators will see each dog working over a marked course featuring three obstacles, the last being an enclosed pen the sheep are herded into. The dog’s job is to keep the sheep within the boundaries of the course.

Each pair starts the trail with 100 points and 15 minutes to complete the course. Points are deducted whenever the sheep are off course or when the dog loses control of the sheep.

Rather than being true farm dogs, there’s no doubt a lot of these dogs are trained to compete. A competition that has become a lifestyle furnished with comfortable caravans, regular cuppas on the sideline and scones with jam and cream.

“The sport is changing but some of these dogs will go back and be working on farming properties on Monday morning, the dog that I am looking for to win this trial is the same dog that I would be looking for on a big property.” 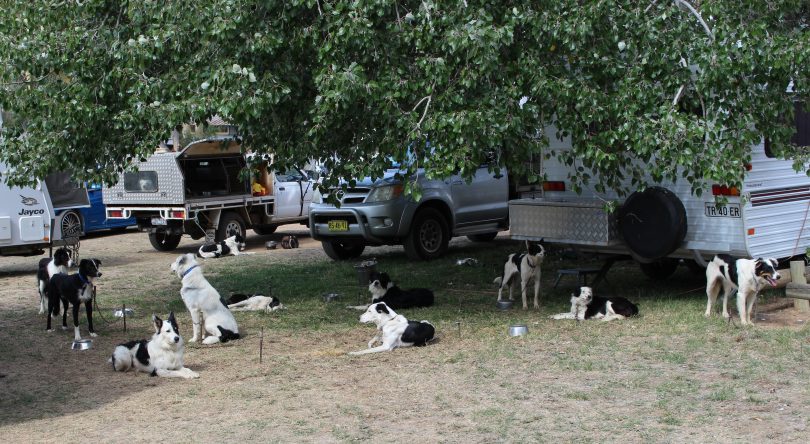 Three hundred dogs and 55 handlers from around Australia are marking the 75th anniversary of the Trials. Photo: Ian Campbell.

The very best dogs show their skill and instinct as puppies.

“It’s not unusual to see pups of 8 or 10 weeks old trying to block the escape of their litter-mates or chooks in the farmyard – it’s an instinct and to modify that instinct becomes the art of sheep dog training,” Charlie says.

“If it’s not born into them then you can’t train it to the extent that you need to.”

The other magic that happens is the bond that forms between the handler and the dog through regular training.

“You can have a good dog but if the handler doesn’t understand the likelihood of what the sheep will do, then the dog will be getting the wrong commands, but the dog really needs to have that little bit of extra something.”

“Working the sheep, the joy of work is the reward for the dogs, these dogs would rather work than eat,” Charlie says. 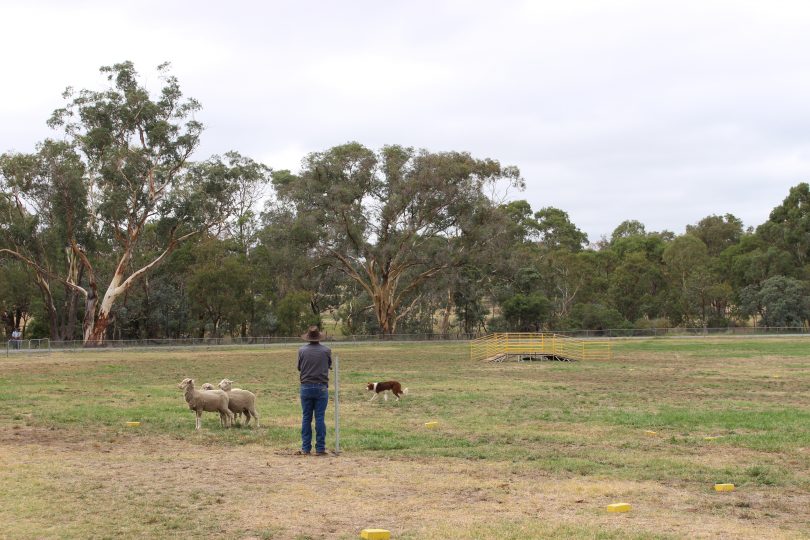 Spectators are welcome over the five days of the event. Photo: Ian Campbell.

The 2018 competition is being run in honour of one of the sport’s most successful human participants: Greg Prince from Dubbo who passed away a fortnight ago.

“Greg Prince came along and won 16 National Championships, this is the start of a new era,” he says.

Charlie is modest about his own chances in 2018 and has arrived from his property in Yass with a trailer of dogs boasting all levels of experience.

“I’ve got a couple of nice dogs here. My father was a sheep dog trialer before me, and I’ve always had a dog at home, it’s been life-long.”

The National Sheep Dog Trials run each day between 8 am and 4:30 pm at Hall Showground. The highlights include the Champion of Champions and the Open Final on Sunday.

Entry is free on weekdays; the weekend is $5 per adult and $15 per car, pet dogs are welcome on a lead, food and coffee is available Saturday and Sunday.

Peta-Rene Prior - 7 minutes ago
Lynne Meredith good for you and that school 😊 one does hope you never have a runner.. View
Amy Hodgkinson - 41 minutes ago
Nicholas Feeney You're right it is a safety point for pedestrian paths. I wonder if there's any native plants short enough to... View
Nicholas Feeney - 48 minutes ago
Amy Hodgkinson sorry my comment was pure sarcasm. The state of the grass/weeds across the whole of Canberra. It is dangerous... View
Lifestyle 18

Lisa Nicole Sharwood - 4 hours ago
Jamie-Lee Blundell my point is that there are playgrounds that do not use safe equipment or mitigate risk sufficiently. In Au... View
Capital Retro - 14 hours ago
Some years ago, I went with some other parents to Cotter reserve to camp after our 12yo boys had won their football final. It... View
Adam Rath - 16 hours ago
Florence Ho should the act government hand out cotton wool too? View
Lifestyle 10

Robyn Whitney - 5 hours ago
I remember a old squatter, apparently a World War 2 veteran, who used to live at the bottom of Mt Ainslie and would wave to m... View
Jen Fowler - 5 hours ago
Very interesting. View
Community 3

purplevh - 16 hours ago
Ancap has anomalies. For example they rate a 2003 Falcon the same as a 2003 Fairlane. Falcon has two airbags, seatbelt pre te... View
Community 2

For many, the thought of visiting the dentist can come with a wave of anxiety. But even when you do...
Community 64

WARNING: This story may distress some readers. 'Pindar' the peacock is the latest to be struck by a car on...
Opinion 43

An ACT school principal's stand against mandatory vaccination against COVID-19 for school staff has thrown the spotlight on the growing...

@the_riotact @The_RiotACT
With major public #infrastructure activity set to double during the next three years, demand for #skills, labour and materials is forecast to be higher than #supply, according to a new Infrastructure Australia report https://t.co/jyZCXKlHOu (52 minutes ago)

@the_riotact @The_RiotACT
ACT Health has reported nine new cases of COVID-19 in the ACT. There are 20 people in ACT hospitals, including 10 in ICU, five require ventilation https://t.co/fjrdNdmypF (1 hour ago)

@the_riotact @The_RiotACT
#MolongloValley will finally get its public health centre after the ACT Government struck a deal to lease space at the new Palm Healthcare practice in #Coombs https://t.co/kYcSc94x6a (2 hours ago)