An artist’s impression of Eastedge Stage 2 at Symonston. Images: Supplied.

Canberra developer Evri Group is planning a $12 million expansion of its technology precinct at Symonston with an extra 6,600 square metres of commercial accommodation.

Evri, which delivered and owns the award-winning Equinox Business Park in Deakin, has lodged plans for the second stage of its Eastedge precinct in Faulding Street.

The company says Symonston is an attractive location for Canberra’s technology industries due to its central location, ease of access, good public transport links, abundance of on-site parking and close proximity to the Parliamentary Triangle, the City and the Airport.

The area is already home to research firms, defence companies, technical service centres, and government agencies, and the new development will only add to Symonston’s reputation as a technology business centre. 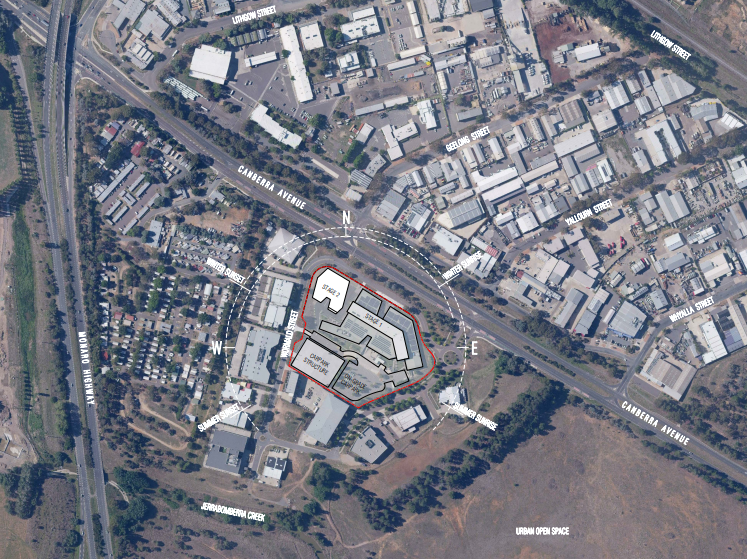 A site analysis of the proposal.

Evri saw Symonston’s potential in 2017 and purchased a 3.2 hectare site positioned at the entry to the suburb.

Last year it completed a redevelopment that transformed an existing building into a sustainable, 4.5 NABERS energy rated, multi-purpose single-storey facility of about 7,700 square metres set in a park-like setting with pleasant landscaping and amenities.

Eastedge Stage 1 is almost fully leased and accommodates US aerospace and defence technology company Northrop Grumman, the Department of Finance and the Red Baron lounge and café.

A two-level car park has also been recently constructed on the site.

Another view of the proposed development. The building lobby will be bathed in natural light from a skylight.

Stage 2 will be a second architecturally designed and sustainable building over three levels that will feature a skylit lobby and enhanced with further landscaping.

”This building has been designed to offer flexibility to cater for multi–tenancies from as small as 240 square metres through to a whole building tenant,” Evri says.

It will be built on an existing surface car park, and 106 spaces will be removed.

But the DA says that there is surplus parking already existing on the site to cater for the increase in demand from Stage 2, and a handful of spaces are also proposed, which landscaping will screen from view.

The new building will also have end-of-trip facilities including bike racks and showers for tenants.

AMAZING!!! Such an hidden gem

Andrew Sage - 5 hours ago
On my ... View
Denise Bourke - 5 hours ago
We love the work of mower teams and their supervisors. Keep em coming. View
David Fenwicke - 5 hours ago
The grass needs to be mown before it sets seed otherwise noxious weeds like Chilean needle grass which I saw on Northbourne a... View
News 7

JC - 5 hours ago
As was the case with delta the over reaction as you put it is just a pause to buy time to see how big a problem it really is.... View
HiddenDragon - 8 hours ago
With Australia's international border being "thrown open" (as tonight's TV news reports are reminding us) from next Wednesday... View
jorie1 - 9 hours ago
Close the international borders to everyone but Australian citizens! And have strict quarantine for Aussies coming in here .... View
News 18

2500 plots in new cemetery’s first stage, but no natural burials