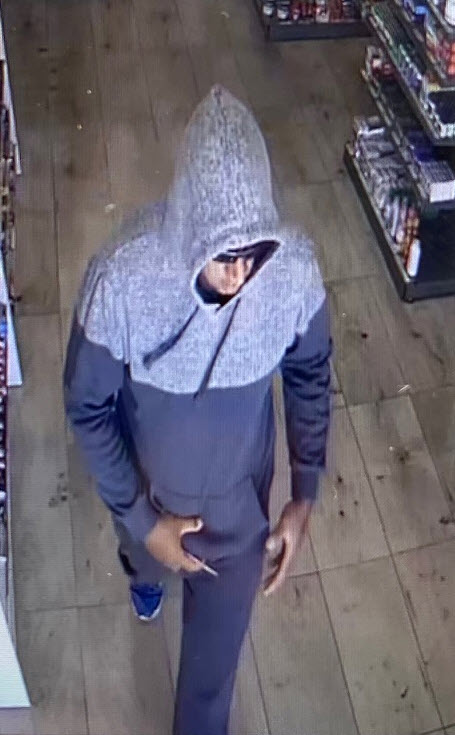 An image of the alleged offender from an armed robbery in Queanbeyan this week. Photo: Monaro Police.

Police are searching for a man in his late 30s to early 40s following an armed robbery at a convenience store on Donald Road in Queanbeyan earlier this week.

At about 10:45 pm on Monday (25 November), a man entered the store armed with a knife. He walked behind the counter and threatened the store attendant before demanding cash and cigarettes.

The attendant complied and the man fled on foot along Fergus Street.

The store attendant sustained no physical injuries as a result of the incident.

“We are appealing for anyone who may have witnessed a man in his late 30s to early 40s, approximately 180 cm tall, with a tanned complexion, muscular build, wearing a grey/blue hooded tracksuit and sunglasses around the time of the incident,” the police spokesperson said.

Police are urging anyone who may have information or dashcam/CCTV footage around the time of the incident to contact Queanbeyan police station or Crime Stoppers on 1800 333 000.

Lynne Meredith - 7 minutes ago
Steve Jones totally agree! You see it all the time - fenced or not! View
Sue Danaher - 55 minutes ago
Playgrounds should be wonderful open spaces. I cannot imagine the lovely playground at Forde being fenced in. Playgrounds sho... View
Liz Mellor - 1 hour ago
Steve Jones no it isn't - I'm pretty sure you'll find the people (who started this petition) who want the playgrounds fenced... View
Opinion 34

Kriso Hadskini - 35 minutes ago
Peta-Rene Prior yes this justification is what the majority think, that is what I am saying, personally I dont discuss my hea... View
Mark Dawson - 56 minutes ago
Why do people keep thinking mandatory medical procedures are a new thing? View
Peta-Rene Prior - 58 minutes ago
Kriso Hadskini given the fact majority of information on any one person is available through their social media usage it’s... View
Lifestyle 18

For many, the thought of visiting the dentist can come with a wave of anxiety. But even when you do...
Community 57

@the_riotact @The_RiotACT
#MolongloValley will finally get its public health centre after the ACT Government struck a deal to lease space at the new Palm Healthcare practice in #Coombs https://t.co/kYcSc94x6a (50 minutes ago)

@the_riotact @The_RiotACT
Homegrown #supermarket chain Supabarn has made a sizeable #donation to @HandsCanberra. As the second COVID-19 lockdown hits our most #vulnerable people hard, charities say funds are most welcome https://t.co/XOD1vKTgyS (2 hours ago)

@the_riotact @The_RiotACT
While it's clear a #vaccine is the best way to control the COVID-19 pandemic, Ian Bushnell says the normalisation of coercive laws such as mandatory vaccination should concern anyone who professes to uphold civil liberties and human #rights https://t.co/mWWMSBz6Hd (4 hours ago)