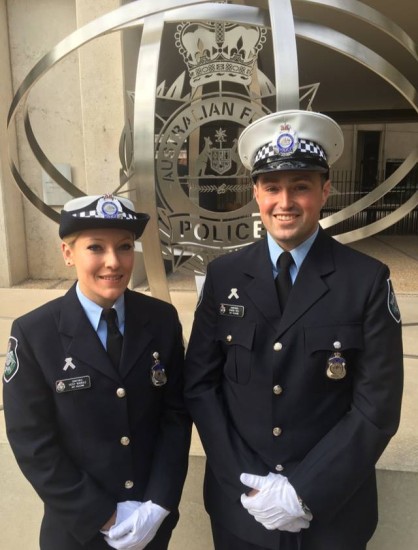 ACT Policing has welcomed 20 new officers to its ranks following an attestation ceremony at the Australian Federal Police headquarters in Barton on Friday.

In the first attestation for this year, 18 men and two women were officially sworn in as constables in front of family and friends.

The new officers range in age from 23 to 46 and are transitioning to ACT Policing from protective service officer roles at Parliament House, Canberra, and Garden Island, Sydney.

They bring a range of experience and skills from previous employments, including with Northern Territory Police, the Australian Defence Force, the public service, security, retail, hospitality, information and communication technology and various trades.

“As recruits, they are mentally and physically tested to ensure they are ready to serve our community well,” he said.

Constable Vicky Wardle was awarded the Commissioner’s award for excellence in recruit training for her performance in all elements of the program, including teamwork, leadership, communication, academic achievement, physical training and commitment to the values of the AFP.

The new officers will complete a rotation with traffic operations before being deployed to stations.

Marea Fatseas - 21 minutes ago
David Riddell the waste normally going to landfill in Mugga Lane wouldn’t be enough to meet the proposed CRS target of 300,... View
Capital Retro - 14 hours ago
Double handling makes no commercial sense but the ACT government is worried about that. It is more likely that the waste we a... View
Maya123 - 15 hours ago
I have been in Canberra since way before 2008; 1974 in my case, and I always heard Fyshwick referred to as light industrial b... View
News 45