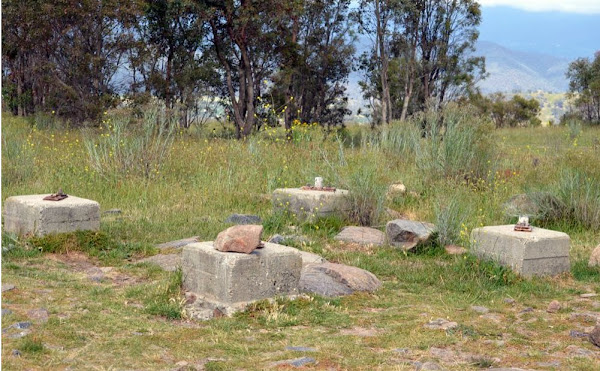 Whilst walking up Mt Taylor this morning I noticed that the trig point at the summit had been removed. It was a professional job, the legs had been sawn through cleanly at the base leaving only four concrete blocks.

I thought it might have been removed by TAMS because the original trig point on the mountain was replaced in the late 1970s by the one that was there up till now. Maybe a new model was on its way, so I thought.

During the time I was there three men came up and one said that the trig had been removed by vandals. If so, why? It isn’t valuable and what would you use it for? Where would you keep it? You couldn’t put it in your garden as someone would see it and immediately know it was stolen and notify the authorities.

So does anybody in the RA community know what happened to the Mt Taylor trig? Are there any plans for it to be replaced or will the summit remain unmarked?

Above: After removal.
Below: Before. 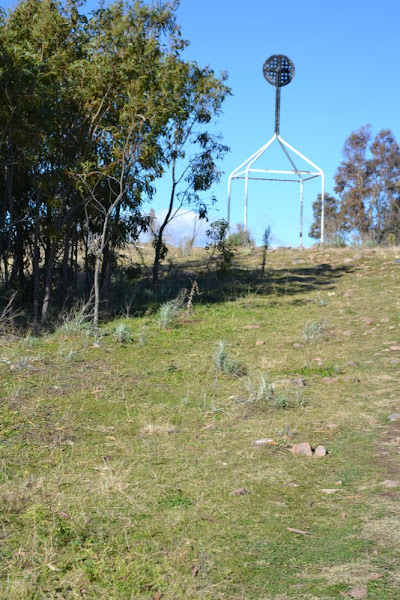 I was driving in Pearce today and looked up at the mountain and it appears the trig point is back up there. Maybe a shiny new one. The familiar round black spot next to the panoramic map. I’ll have to take another hike up there to see the new arrival. Ah, the power of RiotACT!

Does anyone remember the time back in about 1994 when some clowns spray-painted the trig station above Oxley bright gold? It would strongly reflect the afternoon sun and was quite dazzling.

we were up there about a month ago and the Trig was lying about 20 meters away from it’s original location in the middle of the rutted dirt track. Then the week after that someone had moved it again and it was halfway down the newly resurfaced “road” at the top of the hill. A couple of days later it had moved again.

I doubt it was stolen. I saw it neatly lying on its side for a few days next to the concrete mounts and after a few days it was gone. It looked like only three of the mounts had been sawed off and that the last had rusted and decayed over time (I didn’t take close enough of a look) so I think it is more likely that I was being replaced. I hope it comes back because it was great for chin ups as said.

We now have the foundation for someone to build a henge proper like guvnor.

Now it just looks like the world’s most boring henge. Though it would be convenient for a picnic, if the vandals had taken the poles right off so they didn’t ruin the seats.

No one knows who they were or what they were doing
But their legacy remains…
and Canberra now has an 18″ high henge. Excellent.

Now it just looks like the world’s most boring henge. Though it would be convenient for a picnic, if the vandals had taken the poles right off so they didn’t ruin the seats.

One trouble with GPS and other remote location systems is they assume that the ground doesn’t move. Biq quakes can change the land that is within a boundary designated by such a system.

The “orbital system” is now 3 systems and counting – GPS, GLONASS, Galileo: http://en.wikipedia.org/wiki/Global_Positioning_System#Other_systems … It has global resilience and redundancy. Recent GPS devices (including phones like the iPhone 4S, Galaxy Note) have GLONASS receivers.

Earth-bound transmitters – on trig points – would have to be a different (or possibly complementary system ala D-GPS) and would require additional equipment at additional cost. Implementing such a system locally rather than globally would provide little economy of scale, so even greater cost..

don’t mind johnboy – he’s just worried about the reptoids coming and blasting all our satellites out of existence, leading to a dark age of technological failure.

I’ve long thought a smart government would install GPS transponders on trig points to create some resilience and redundancy should something unfortunate happen to the orbital system.

The “orbital system” is now 3 systems and counting – GPS, GLONASS, Galileo: http://en.wikipedia.org/wiki/Global_Positioning_System#Other_systems … It has global resilience and redundancy. Recent GPS devices (including phones like the iPhone 4S, Galaxy Note) have GLONASS receivers.

Earth-bound transmitters – on trig points – would have to be a different (or possibly complementary system ala D-GPS) and would require additional equipment at additional cost. Implementing such a system locally rather than globally would provide little economy of scale, so even greater cost..

Bloody idiot thieves. That trig point was a great impromptu chin up bar after a run up the mountain.

It cant be vandalism becuse its not logical? Thats almost the reason vandalism exists.

I’ve long thought a smart government would install GPS transponders on trig points to create some resilience and redundancy should something unfortunate happen to the orbital system.

Gavin van der Hout - 10 minutes ago
I hope that stats are kept showing that these religious headwear doesn't provide protection, and then we can use those stats... View
Gavin van der Hout - 11 minutes ago
Really... Well, as long as your belief protects you when you crash... Everyone knows your headwear won't save you, but hey, y... View
Peter Athey - 14 minutes ago
3 words; flying spaghetti monster serious - look it up. buy yourself a colander... View
News 104

Julie Macklin - 34 minutes ago
James Dof And no one has ever expected trades people to cycle from job to job with their tools. That is just a straw man argu... View
Heather Grant - 3 hours ago
Suggest they hire extras from Deane's and Keir's (and anywhere else close by that have spare buses for hire). Instead of look... View
Ashley Wright - 6 hours ago
Cary Elliot Johnson do you have an example of such a city but when defining decent? define it from a daily users point of vie... View
Opinion 47