The Greens MLA’s appointment to the plum education role is surprising given Labor’s traditional focus on the sector and the fact that Mr Barr had an alternative from his own party in Chris Bourke. Dr Bourke did a stint as education minister when Katy Gallagher was Chief Minister, but this time around has picked up only minor portfolios.

Mr Barr dismissed a suggestion placing Mr Rattenbury in Education was a risk.

“I’m very confident in Shane as a minister, as part of my team, and I think it’s important to again demonstrate the successful collaborative working relationships that we have in this government across the two parties,” he said.

The Chief Minister said he had a lot of trust and faith in Mr Rattenbury, and enjoyed working with him.

“Shane has a good reformist zeal about his approach to ministerial portfolios,” he said.

Mr Rattenbury had at the end of last year expressed to Mr Barr an interest in working in new portfolio areas.

“He wants the opportunity to work in other areas, to broaden his experience in territory government,” the Chief Minister said.

The Greens MLA retains Corrections and Justice and picks up the new porfolios of Consumer Affairs and Road Safety. His former Sport and Recreation ministry goes to Yvette Berry, who will manage the expanded Housing, Community Services and Social Inclusion ministry in addition to existing portfolios.

“The ministerial role I’ve performed over the last three and years and now having a new portfolio has really given the community the chance to see the fact that the Greens can play out a strong and responsible role in government,” he said. 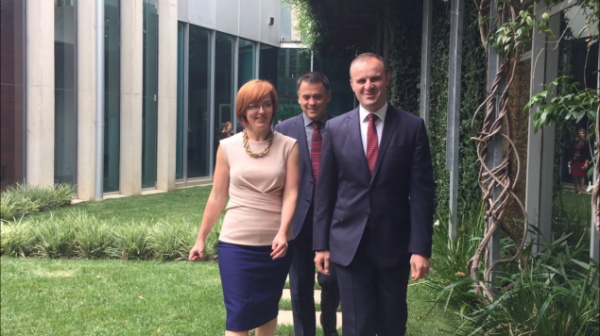 Rising Labor star Meegan Fitzharris has landed the Transport and Municipal Services portfolio as well as the roles of Assistant Health Minister and Minister for Higher Education, Training and Research. TAMS will provide her with opportunities to connect with Canberrans at a grass roots level while serving an apprenticeship with the experienced Health Minister and Minister for Capital Metro, Deputy Chief Minister Simon Corbell, ahead his departure from the Assembly after the ACT election. She will take responsibility for light rail from Mr Corbell June 30.

“We clearly have in each of Mr Corbell’s portfolios a succession plan in place,” Mr Barr said.

Mick Gentleman takes on Ms Burch’s former Racing and Gaming portfolio and is the new Manager of Government Business in addition to his existing responsibilities.

In other news, Labor MLA Mary Porter announced today that she will leave the Assembly on February 19 rather than in October after the election. She will retire to Lake Macquarie near Newcastle and likely be succeeded by solicitor Jayson Hinder.

I read this as him being handed the proverbial s@#$ sandwich. He now holds a number of dysfunctional portfolios that have more bad than good news. What Barr has done is shifted the dysfunction to the Greens.

So, just like TAMS did with the waste services, will schools now also be contracted out to the cheapest tender?

Yes, makes perfect sense, all but for schools in the inner north which will become high funded centres of excellence all linked to the new urban hubs.

Not sure how this is a promotion. Education is a federal gov proxy.cages aside that is.

There is probably a pecking order in ministerial portfolios. More evident at the Federal level than it is in the ACT Legislative Assembly (with its doubling up of portfolios). Generally, I would think that Education is a step up in “prestige” for Mr Rattenbury.

However, what I find strange is a Greens minister giving up TAMS, where presumably the green: agenda and policies can get more visible traction. Unless of course, there is about to be even more of a “green focus” in ACT school classrooms.

Would be interesting to know what Greens supporters think of that.

Is this a case of personal ambition overcoming Greens policies ?

So, just like TAMS did with the waste services, will schools now also be contracted out to the cheapest tender?

All cages to be made from renewable sources. Bamboo and the like.

Not sure how this is a promotion. Education is a federal gov proxy.cages aside that is.