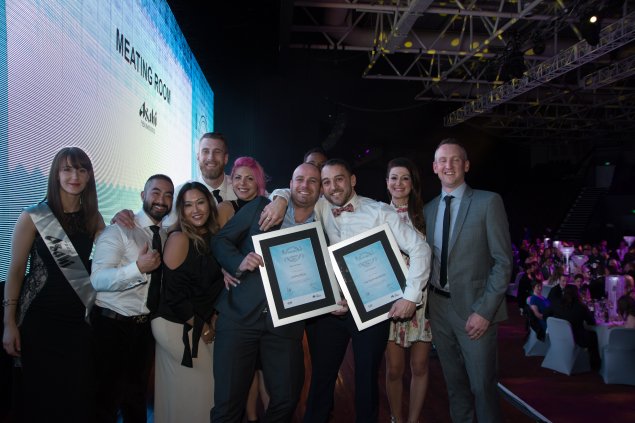 Following a record number of entries, more than 440 industry, political and hospitality leaders attended the black-tie event hosted by ABC political reporter Anna Henderson to mark the outstanding achievements of the ACT’s hospitality businesses and employees.

More than 30 sponsored awards were presented, including those for best deluxe (5-star) hotel, cocktail bar and restaurant, and others for best local venue and best sporting venue.

“From a popular established Manuka gastro-bar to a unique five-star hotel and a world-class wildlife retreat, this year’s winners showcased innovation and progression across the ACT’s hospitality sector,” she said.

The hotel, hospitality and tourism sector is vital to the ACT’s economy and will become even more with the introduction of international flights to Canberra in September, she said.

“Competition was incredibly tough this year, particularly given the sheer number of entries, which indicates how much the industry has grown and developed over the last few years.”

Two major awards were also given to talented industry leaders: AHA ACT’s John Press Award was won by Brian Smith from Hopscotch and Young & Frisky, while Tarn Morrow from QT Canberra was crowned 2016 member of the year.

Jenny Lowes - 53 minutes ago
Judy Sheargold Sure Jude, good idea. Will take that being Gospel, from Linda!! View
News 3

ssek - 8 hours ago
More animals get hit during drought because the drainage next to roads is the only place there is green feed. When there is g... View
Karen Feng - 16 hours ago
is this an indication that we do not have enough land fornthe wildlife to thrive? theres this road from holt to Fyshwick that... View
Community 1