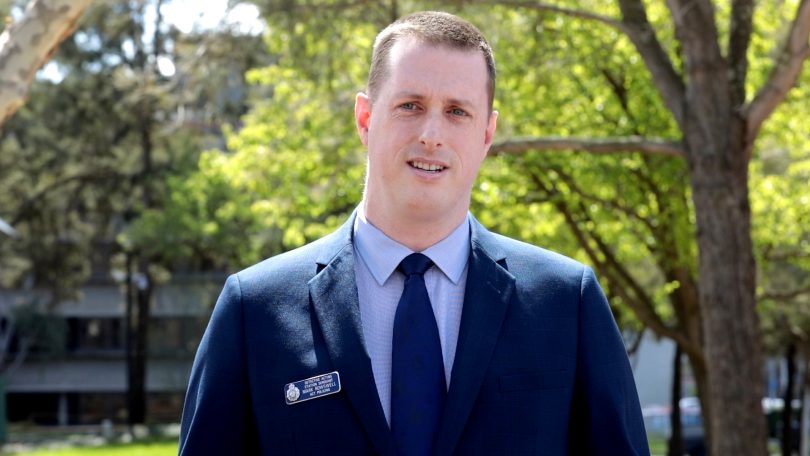 Detective Acting Station Sergeant Mark Rowswell said police do not believe there are any links to other crimes. Photo: Region Media.

Police are investigating an attempted aggravated robbery at a takeaway shop in Charnwood last night after shots were fired during a scuffle between staff and two men.

Around 8:25 pm, two male offenders armed with a firearm and a machete entered Regal Charcoal Chicken in Charnwood, demanding money and threatening staff.

A short scuffle ensued, during which the firearm was discharged twice inside the shop. The two men fled the scene empty-handed.

Detective Acting Station Sergeant Mark Rowswell said staff and customers were in the store at the time of the attempted robbery. He said no one was hurt by the incident but they were “very shaken” and were receiving support.

Police are appealing for information after an attempted aggravated robbery at a shop in Charnwood, during which shots were fired. Detective Acting Station Sergeant Mark Rowswell said staff and customers were in the store at the time, and has called for anyone with information to come forward. Click play to hear more about the incident.

“In relation to robberies, we ask that people do comply with the directions that are given to make sure that they are safe and people aren’t hurt or injured or killed,” he said.

“These are extremely serious circumstances and incidents. Any use of a firearm in that sort of situation is life-threatening, so we are calling for witnesses to come forward so we can try to get these guns off the street.”

ACT Policing has established a crime scene and AFP Forensics have examined the scene.

Anyone who witnessed the incident, or who has information that could assist police is urged to contact Crime Stoppers on 1800 333 000, or via the Crime Stoppers ACT website.

I hope everyone who works (stupidly big hard hours) There is safe xx I have frequented this establishment for over 15 years and I still swear by it being the best pizza! The bbq chicken is the best xx sending love and I will make a point to drive over the border to buy one within the next few days xx