The Censor’s Library to launch at Paperchain Manuka 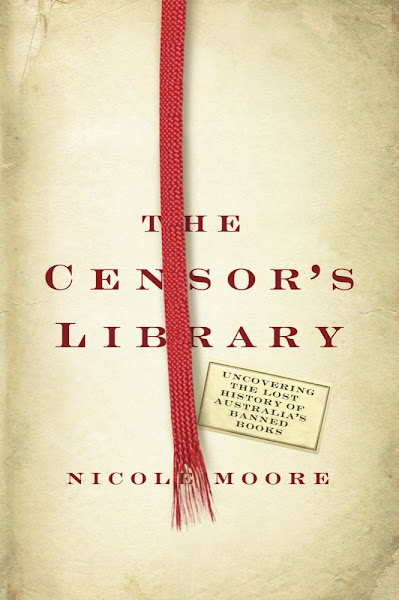 Paperchain sent in this news which sounded interesting enough to share with you:

Please join us for the launch of ‘The Censor’s Library: Uncovering the Lost
History of Australia’s Banned Books’ by Nicole Moore.

The book will be launched by Professor Angela Woollacott, Manning Clark Chair
of History at the ANU.

A history of book censorship in Australia – what we couldn’t read, didn’t know, and why!

For much of the twentieth century, Australia banned more books and more serious books than most other English-speaking or Western countries, from the ‘Kama Sutra’ through to Huxley’s ‘Brave New World’ and Joyce’s ‘Ulysses’.

‘The Censor’s Library’ is the first comprehensive examination of Australian book censorship, based around the author’s discovery of the secret ‘censor’s library’ in the National Archive – 793 boxes of banned books, prohibited from the 1920s to the 1980s.

As it has for much of Australia’s history, censorship continues to attract heated debate, from the Henson affair to the national internet feed. But federal publications censorship has been a largely secret affair for most of the century, deliberately kept from the knowledge of the public. ‘The Censor’s Library’ is a provocative account of this scandalous history. Combining scholarship with the narrative tension of a thriller, Nicole Moore exposes the secret history of censorship in Australia.

Nicole Moore has published widely on Australian literary history, nationally and internationally. Her bibliography ‘Banned in Australia’ (co-authored with Marita Bullock) was launched on the Austlit web resource in 2008. She was contributing editor to the ‘Macquarie PEN Anthology of Australian Literature’ for the period 1900-1950 (Allen and Unwin 2009). She is Associate Professor in English at the University of New South Wales at ADFA in Canberra.

What a great idea for a book!

I look forward to a related title: The Moderator’s Library: Uncovering the Riot Act’s Hidden Comments by JB.

Craig Sutton - 13 minutes ago
Kathie Nash Yeah thanks scoop 🙄 I was referring to the entire northern part of Australia. Cairns, Townsville, Darwin etc... View
Sharon Cabban - 24 minutes ago
Lani Metcalfe future for Jack View
Kathie Nash - 1 hour ago
Canberra will never get its own AFL team while we only have a 'stadium' that holds 13,000 at maximum. Need a bigger stadium t... View
News 31

Ashley Hillstead - 33 minutes ago
That being said it looks like losing a prop won’t take their drones out so I guess they just hack it and repair any damage View
Ashley Hillstead - 35 minutes ago
Dean Okeeffe anyone who’s ever used drones even recreationally knows birds go for them too, there are hundreds of videos on... View
Food & Wine 15

Julie Macklin - 36 minutes ago
Peter Hatfield Not faster if the bus gets stuck in peak hour traffic in Sydney, as has happened to me. I used to catch the bu... View
Peter Hatfield - 1 hour ago
Or just go to the Jollimont and catch a comfortable coach and be in Sydney an hour faster, and at a fraction of the real cost... View
Greg Myat - 4 hours ago
Ross McConchie I agree with you entirely about using rail more to get trucks off our main routes. But trains are the most eff... View
Property 13

Kacey Butterworth - 38 minutes ago
Tim, let’s move. View
Jodie Kerec - 2 hours ago
Lisa Van Schieveen we could live here together. View
Gabrielle Driver - 3 hours ago
Lauren Edney look how nice it is. I'd have the cottage View
Sport 7

From Baggy Green to Back Page: become a sporting trivia hero with the National Library of Australia