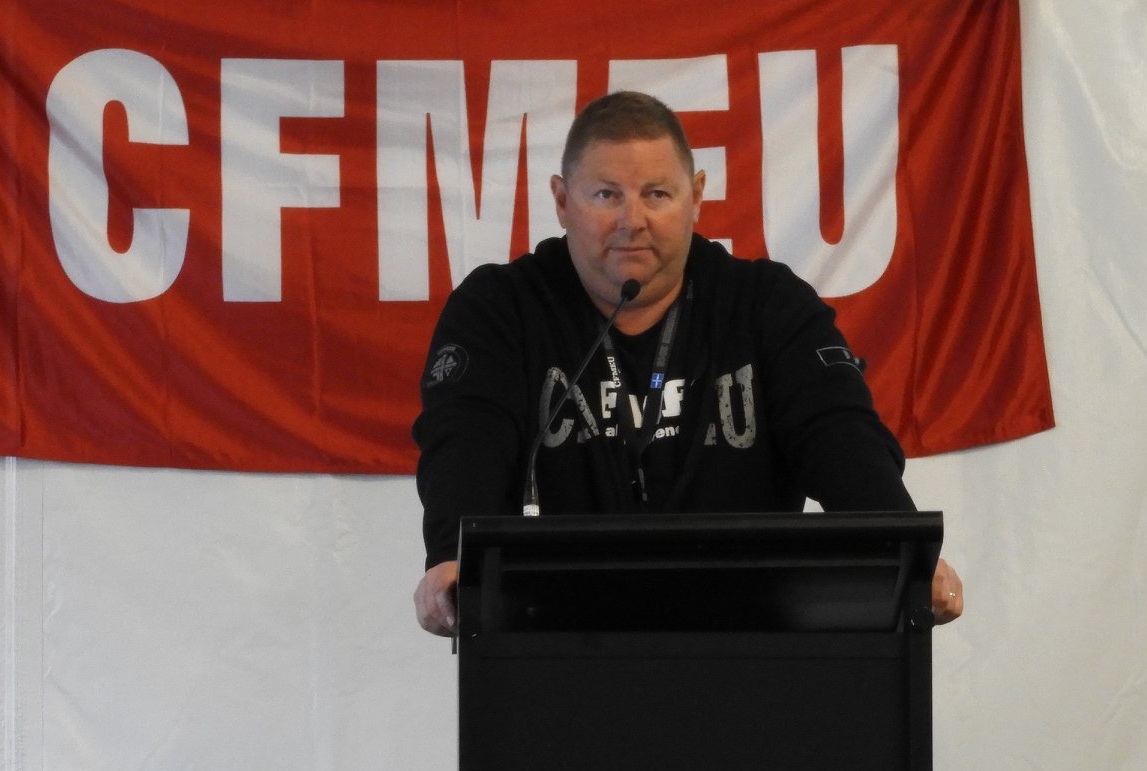 Jason O’Mara was one of three union officials personally fined over illegal picketing at a London Circuit worksite in 2018. Photo: CFMEU ACT, Facebook.

The Federal Court has increased a penalty against the Construction, Forestry, Maritime, Mining and Energy Union (CFMMEU) by $54,000 over the union’s unlawful picketing of a Canberra building site in 2018.

Court action against the CFMMEU and three of its officials was launched by the Australian Building and Construction Commission (ABCC) in 2019.

The union and its then ACT branch construction and general division secretary Jason O’Mara, then ACT branch assistant secretary Zachary Smith and organiser Joshua Bolitho admitted to unlawful picketing that delayed work at a 12-storey commercial building project at Constitution Place on London Circuit on 14 May 2018.

The dispute stemmed from alleged underpayment of workers on the site, with the union blocking the main gate entrance with two cars and securing chains and padlocks on various gates preventing workers from accessing the site.

The union also parked a variable message sign which displayed various messages, including “Danger! Wage theft occurs on this site” and “Bad bosses and ACT Gov partners in crime”.

Police were eventually called and project management used bolt cutters to gain access through the gates.

Federal Court Justice Anna Katzmann had originally ordered the union to pay $126,000 because of the action, however has ordered it to be increased to $180,000.

In her judgement, she said while there had only been one previous contravention by the union in the ACT, as a whole it did not have a “culture of compliance”.

“[Its] overall record tends to show an attitude of indifference to the law at least on the part of its construction and general division,” she said.

“The union’s lack of contrition and failure to take corrective action, despite the imposition of numerous penalties for contraventions of a similar kind, underscores the compelling need to fix a penalty large enough to operate as an effective deterrent.”

She also noted the union had expressed no regrets or remorse over the disruption.

The three union officials have paid the penalties ordered against them in July 2020, which were a combined $33,600.

Acting Fair Work Ombudsman Mark Scully warned all participants in the building and construction sector were expected to follow the law.

“Consistent with other industries, in commercial building and construction the Fair Work Ombudsman will investigate reports of non-compliance and hold to account those who are acting outside the law,” he said.

Responsibility for the case transferred from the ABCC to the Fair Work Ombudsman in December 2022 under federal legislation.

For all of the good work waged by unions and their supporters over the last number of years for better working conditions for workers we have these three thugs breaking laws and making nuisances of themselves. One of them has been rewarded with the leadership role of Secretary of the Canberra branch of the CFMMEU. No-one can take this male dominated movement and its leadership seriously. The judgement and its orders said it all. Thuggery and lawbreaking are the norm. Maybe these so-called leaders could get a few tips from Sally McManus and Michele O’Neil from the ACTU. I read elsewhere that these three lawbreakers were to pay the fine from their own finances and I hope that is the case. I would hate any lawbreaking costs to be borne by the contributions made by the hardworking construction workers.