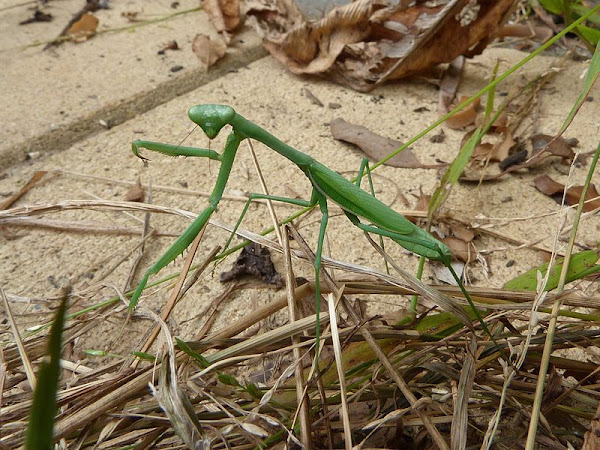 Local songsmith and scientist drew walky is moving up in the world. Where once he wanted silverfish he’s now after praying mantises, and is willing to pay for them with bottles of wine according to facebook.

I need some praying mantises so that I can collect some of their egg-cases and shine X-rays at them and do SCIENCE. Mostly I am after female false garden mantises like the one pictured but I will take any mantis except very small juveniles, and in return for popping any mantis you see in a jar with a few sticks and letting me know when I can pick it up, you get a bottle of wine. That’s right people, wine. Unless you are a tiny child, in which case you do not get wine, because of apparently some archaic legal technicalities, but you probably get some sort of really fancy juice or something, which is also a possibility if you don’t like wine.

If you live in a city other than Canberra, you can still get free wine if you give me a praying mantis but the only thing is you have to give it to me by post and then I have to give you the wine by post, which is more complicated, but still doable.

I am not going to harm these mantises and when I am done they will be released into the wild.

3 Responses to Wine for mantises
Filter
Showing only Website comments

Where do all these insects go during this rain, Drew? Do they just drown?

A few weeks ago, when it had been raining non stop in Canberra for a few days and everyone was building arks, I was standing next to a couple of very noisy pumps, in a wet paddock, in wet cloths, while wet rain fell on me, and a was distracted from my misery for a few minutes by a huge mantis, who, while obiously also unhappy with the weather, climbed up the person standing next to me, all the way to the top of their head. I tried to take a photo, but all I managed was to make my phone wet.

If I had known then that their was wine availible, I would have kept it.

Praying mantis is an anagram of my sangria pint. Which is a revolting idea.

Where do all these insects go during this rain, Drew? Do they just drown?

Jeffrey Brown - 31 minutes ago
Ahhhh those were the days. Standing in the queue and watching the odd brawl of dudes trying to prove their worth. Was normal... View
Kim Rumble-Kozjak - 8 hours ago
Yes!!!!! Our kids have no idea! View
Belinda Malam - 16 hours ago
Kim waiting in that queue was the worst! Remember how bad it was every NYE?... View
Property 13

Valerie Foster - 4 hours ago
This is a problem when a city expands the crime rate goes up. View
Erika Olivier - 5 hours ago
Reality is crime is everywhere, the fact they picked her is bad luck... View
Owen Lund - 8 hours ago
Dale Simpson mate dreambeyan is the land of the free View
Community 1

Charlie Karmenu Flask - 5 hours ago
All the Canberrans that voted for Barr deserve everything they're getting...unfortunately the rest of us have to go along wit... View
John Elliott - 5 hours ago
Ha ha ha that's hilarious. I never had any friendship with this current Labor mob so there's nothing to stretch 🤣🤣🤣 View
Janet Ilchef - 7 hours ago
A government’s friendship with voters? Since when are we friends with governments? View
Community 15

Bec O'Brien - 8 hours ago
It's been closed for a few weeks now. I travel to Dalmeny for work every week from Canberra. Thought it was odd. View
Property 32

When it comes to summer dining, for me, nothing beats fresh sumptuous seafood paired with a glass of chilled crisp...
*Results are based on activity within last 7 days

A Wine Playground is coming to Canberra

Mimosa Wines changes hands, but they’re keeping it in the family

Take 3: Wine down in the great outdoors with these pop-up bars

@The_RiotACT @The_RiotACT
A housing shortage in Yass means people seeking accommodation are finding themselves locked out of the town’s rental market https://t.co/CDuQ5Hbc4S (30 minutes ago)

@The_RiotACT @The_RiotACT
Hannah Quinlivan is the creator behind the distinctive art along the light rail line. And there's a story behind each unique panel https://t.co/6fYF0Xtc3M (2 hours ago)

@The_RiotACT @The_RiotACT
Only 13 per cent of degree-qualified engineers in Australia are women. Here's how UNSW and YoWIE are working to address the imbalance https://t.co/gOxzLpeU4T (5 hours ago)