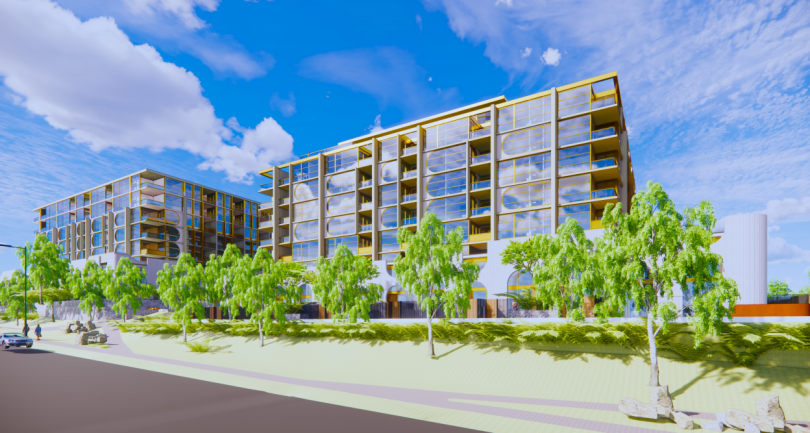 Canberra developer Core Developments has released plans for pre-DA community consultation on the project, West Side Apartments, sited on Blocks 2 and 10 Section 75.

They show two seven-storey buildings that will rise to 21.5 metres and include large landscaped internal communal areas.

This will be Stage 1 of a broader development which includes a further site to the north (Block 9 Section 75) where a single multi-unit residential building is to be developed separately.

The two stages will be linked by a single basement and residential amenities across all three buildings will be shared.

The two buildings will contain 130 dwellings in each – a mix of one-bedroom, one-bed and study, two-bedroom, two-bedroom and study, and three-bedroom units, including ground floor town houses.

READ ALSO: Hindmarsh finally gets its Woden high-rise proposal through

Designed by Canberra firm JUDD Studio, the two buildings in Stage 1 will include curved shapes and employ a mixture of pre-cast concrete, metallic cladding and glazing to enhance the architecture.

The ground floor is wrapped in a facade of arches that shield the buildings and residential amenity from the footpath and traffic on John Gorton Drive. 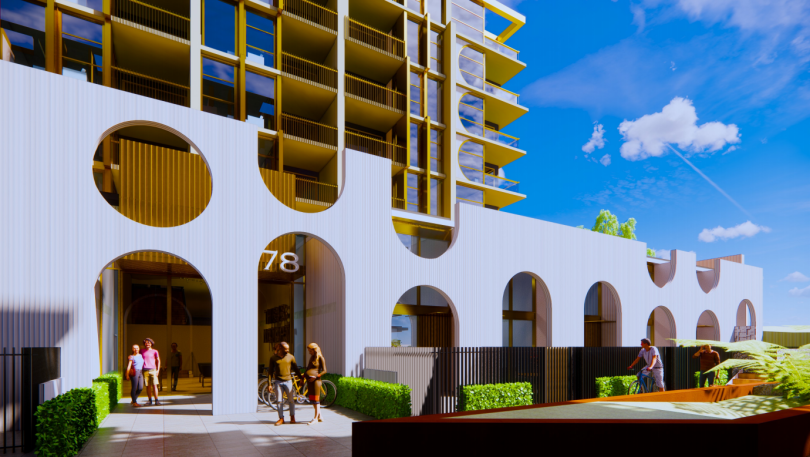 Large areas of communal landscaping are proposed to provide amenity and character to the precinct, using a mix of pools, water features, seating and paving in conjunction with garden beds and grassed areas for residents.

The development will include a co-working space, a potential café for resident use only, gym, barbecue facilities and private communal areas that residents can book for private dining and/or functions.

It will be accessible from Summerfield Close to the rear, a cul-de-sac servicing a number of high-density development sites.

Proposed parking is 213 spaces in one building and 133 in the other.

The plans have changed significantly in light of comments from the National Capital Design Review Panel which raised concerns about density, lack of diversity in dwelling types and the predominance of single-unit dwellings and a low proportion of three-bedroom dwellings.

It also recommended the proponent reconsider the site plan so there is enough room for communal spaces and facilities can be located to receive sufficient light and where noise and overlooking can be minimised.

Jimbo Lambert - 6 minutes ago
Justo Justo some people have driven that stretch of road for 30 or 40 years at 60km/h. If they suddenly reduce the limit it i... View
Dean Soccol - 2 hours ago
Nathan Grieve in Queensland every time we get a fine we lose points. So if you are one of those that don’t care about the m... View
Nathan Grieve - 2 hours ago
Andrew Nelson not every offence comes with demerit points, so unfortunately that statement is incorrect View
Community 8

TheSilver - 2 hours ago
I don't think it does. I'm saying that I value privacy above knowing whether I have contracted a virus. It's a values questio... View
phydeaux - 3 hours ago
It was not government restrictions that killed over a thousand in this country this month. 5% of people on earth is about 390... View
chewy14 - 3 hours ago
The Silver, Your comment reflects a different topic than the usefullness of the QR code system for stopping the spread of Cov... View
News 9