A 69-year-old man has died after he crashed his motorbike near Crookwell on Sunday morning (16 December).

Just before 11 am, the man was riding his motorbike northwest on Junction Road near the intersection of the Tuena Creek Crossing, when he lost control and fell off his bike during a left-hand turn.

The man hit a guardrail and sustained fatal injuries.

A 58-year-old man, who was riding another motorbike, sustained shoulder and pelvic injuries after he attempted to evade the crash before clipping the other motorcycle and coming off his bike.

He was airlifted to Canberra Hospital for treatment.

Officers from the Hume Police District are investigating the circumstances surrounding the crash and a report will be prepared for the Coroner.

Anyone with information about this incident is urged to contact Crime Stoppers: 1800 333 000 or via the NSW Crime Stoppers website. 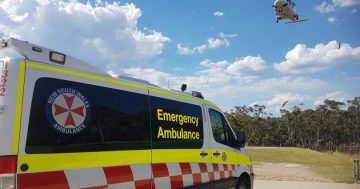