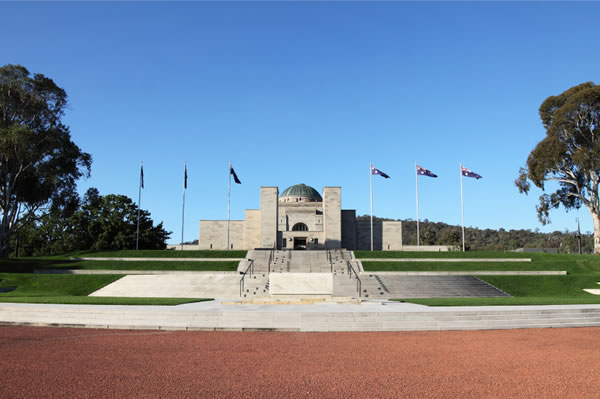 The Federal Government has earmarked almost $90,000 for heritage projects at two of Canberra’s most treasured landmarks, the National War Memorial and the Shine Dome.

Just under $80,000 will go to the National Capital Authority to conserve three World War I memorials on Anzac Parade: the Desert Mounted Corps Memorial, Kemal Ataturk Memorial and the New Zealand Memorial.

These memorials all commemorate Australian and New Zealand involvement in World War I, specifically, the Gallipoli landing in 1915.

The coalition will provide a further $10,000 to the Australian Academy of Science to develop a virtual tour and interpretive signage at the Shine Dome.

The project will develop a full building virtual tour that can be accessed from any internet access point.

Interpretive signage will be developed to describe the building and broader history of the building with visitors.

Seselja said he was pleased the Federal Government was supporting Canberra’s heritage sector and investing in the ACT’s economy.

“Thousands of people come to Canberra each year to visit sites such as the War Memorial. This funding will help ensure that visitors continue to engage with our heritage,” he said.

steveu - 3 hours ago
Rego is a small part of the charge we get each year - most of it is insurance. View
News 3

Maya123 - 11 hours ago
Plastic is a huge amount of waste. McDonalds say they are going to phase out plastic cutlery by year's end, saving as much as... View
Elizabeth Martin - 12 hours ago
All these comments that indicate they couldn’t even read the headline. It’s for public events - ie Floriade, Enlightened... View
Opinion 6

Fergus Thomson - 12 hours ago
Bek Clark I dunno about that, but after a series of operations, nurses are my heroes - I couldn't do what they do daily (incl... View
News 6

Michael McDonald - 12 hours ago
Oh. 10 million. Thatll do heaps View
Louellyn Violet - 13 hours ago
Better goto replanting the damage View
Brent Hunna - 13 hours ago
Maybe they could use it to rebuild those homes in NSW they lost because of this fire that jumped the border. View
News 6

Paul Conn - 14 hours ago
Glenys is a great manager and one of the nicest senior colleagues I ever had the fairly brief pleasure to work with. View
Deborah Gale - 14 hours ago
A great boss and a nice lady. View
Karen Baldwin - 18 hours ago
Tania Parkes yep, me too View
Lifestyle 22

Sean McGrath - 14 hours ago
They are a gimmick and will 66 soon vanish like a Footsal pad. View
Arleen Stark - 18 hours ago
Considering the lonely scooter I see every day abandoned all over the city, I reckon it would take days, not hours, to find t... View
News 4

UPDATED 12:20 pm: The frantic efforts of neighbours and emergency services were not enough to save a 70-year-old woman who died...
Breaking 3

Two thirteen-year-old boys, one of whom was on bail, will face the ACT Children’s Court this morning (4 December), charged...

From a humble mid-afternoon working class pick me up; high tea evolved to become an elegant afternoon soiree infamous amongst...
News 25

They work in the dead of night, fishing e-scooters out of lakes, picking them up off the kerb, swapping out...
News 33

Chief Minister and Treasurer Andrew Barr has ruled out a specific tax on electric vehicles but that doesn't mean EV...
News 18

Have you seen Nina? 15-year-old girl missing since yesterday morning

@The_RiotACT @The_RiotACT
Safe Haven Cafes, for people experiencing mental health distress who want to avoid going to an ED, will start rolling out in January https://t.co/QIh1zaG0VE (44 minutes ago)

@The_RiotACT @The_RiotACT
Looking for an idyllic rural retreat that's a paradise for garden lovers? Check out this sprawling, luxurious estate near Goulburn https://t.co/LnCg0HPZYn (3 hours ago)