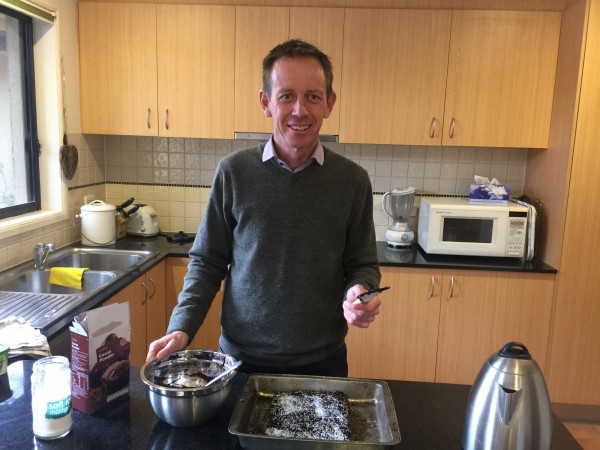 Before visiting Greens Leader Shane Rattenbury at home, I knew that he’d attended Canberra Grammar on a scholarship, that he’d lived on the South Coast before moving here to take up that opportunity in 1984, and that he’d studied economics and law at the ANU.

I knew about his policies on renewable energy, on a comprehensive transport plan for Canberra incorporating but not limited to light rail, on homelessness and housing affordability and on trust in politics.

Like most Canberrans, I knew that Mr Rattenbury had entered the Legislative Assembly in 2008 and together with three Greens colleagues had supported a minority Stanhope Labor government in which he served as Speaker; and that as the sole Greens MLA had once more held the balance of power this past Assembly, forming a parliamentary agreement with Labor (led by Katy Gallagher and later Andrew Barr) that saw him join cabinet with ministries including Territory and Municipal Services, Corrections, Road Safety and more recently Education.

I did not know that the former Greenpeace activist was born in Bankstown Base Hospital (his father was working as a plasterer in the area), or that Mr Rattenbury hadn’t had much to do with his dad because he left the family when Shane was just four years old.

“I’ve had very little contact since, so I actually don’t know my father very well at all,” Mr Rattenbury said.

The Greens Leader said he was the first among much of his family to go to university.

“My mum was probably a woman of that era in that sense that she’s actually very intelligent, but she left school at 16 to go and get a job, and I’m quite sure she could’ve gone to university but that was not an option, both in terms of the world she lived in, which was relatively working class, and the time and the era and the way girls were treated.”

He remains close to his mother, who is helping out with the campaign as she still lives in Canberra, as do his sister, her husband and their children (Mr Rattenbury has one niece and nephew, both under the age of 12).

“They’re heaps of fun, they live down in Tuggeranong, and with my work I probably don’t see them as often as I should, but that was one of my reasons for moving home from overseas as well,” Mr Rattenbury said.

The then International Political Director of Greenpeace International lived in Amsterdam for four and a half years and in Bangkok for six months before returning to the ACT.

“My niece and nephew were growing up and I wanted to be here for that as well,” he said

Mr Rattenbury had the opportunity to take jobs else where in the world, including Washington DC and London, but says coming home was a pretty good prospect.

“It’s great to get out and experience the rest of the world, but you can’t beat home, especially when home is as good as Canberra,” he said.

The recipe he chose to cook up for the candidate challenge is a bit of a Rattenbury family institution. It’s a chocolate slice his mother used to bake for him during his childhood.

“Not being much of a baker, I thought I’d go for a tried and true favourite,” the Greens Leader said.

“There was always a container of this around the house as I was growing up.”

He had fond childhood memories of his mother baking it at home.

“She brought us to Canberra, so I sort of associate this with my mum and moving to Canberra,” he said.

It’s a chocolate slice with ingredients including Weet-Bix, flour, desiccated coconut, cocoa, butter and golden syrup. Having not cooked it for some time, the Greens Leader did a test run at 10pm last Wednesday and took it into his office to see whether his staff approved.

“It went down OK, actually,” he said.

“I slightly overcooked it last week so it wasn’t quite right, I was glad I had a second attempt.”

You can see Mr Rattenbury icing the slice on our candidate challenge video, but not what happened next.

I confess I took him up on the offer of trying some of the chocolate icing off the spatula afterwards, which evoked all sorts of memories of licking the beaters when my mother baked cakes, pavlovas and slices during my own childhood.

I also too him up on the offer of a container full of slice to take home and various members of our household fought over the last couple of pieces. I can see why it was such a hit during Mr Rattenbury’s childhood. It’s a great little mid-afternoon snack for Canberrans of all ages. Here it is, exactly as it came to us via Mr Rattenbury’s mum.

1 cup crushed weetbix ;
1 cup coconut;
1 cup flour;
A bit of sugar (original recipe said 1 cup, I never did), just a spray;
2 tablespoons cocoa.
5 oz margarine. (hmm – my scales have both).
1 tablespoon golden syrup (a good tablespoon, this is what binds it together).
Half teaspoon vanilla essence.

Mix dry ingredients in a bowl.

Melt margarine on stove in a small saucepan, add golden syrup and vanilla;

Spread in lamington tin (or square or oblong, whatever you have).

Chocolate icing (icing sugar with some cocoa or, if you know how, could do frosting.)

We have a dozen more candidate challenges to publish between now and the election but no capacity to attend interviews beyond those. We are thinking about extending the concept into a “meet the new MLAs” series, though. See all the videos so far on YouTube here.

It sounds like a good recipe. But a bit too sweet for me :/

He’s a bit of an outlier, hey. With his background he might have fitted the model of the ALP Left better than the ultra-middle-class Greens. Specially since the negative gearing revelation shows that he doesn’t actually live Greens policy when it might cost him a dollar!

Pari Gilmour - 53 minutes ago
I support a burnout pad. Zero interest myself but obviously these guys need a social space to do their thing. Happy to suppor... View
Property 13

World Cultures in Cake for the 2019 PANDSI cake off

@The_RiotACT @The_RiotACT
Book a seat for Kambri Film Fest 2021, a free festival that celebrates and elevates the contributions of creative women in the film industry https://t.co/5oivpfnWaq (50 minutes ago)