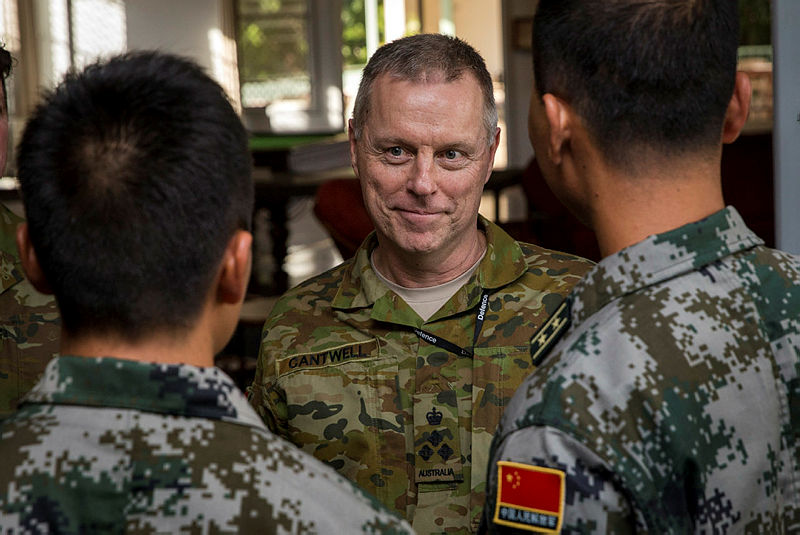 “I look forward to leading the dedicated and experienced Elections ACT team, and building on their highly valued skills to serve the Legislative Assembly and people of the ACT in the future. I’m excited about the challenges ahead,” Brigadier Cantwell said.

Speaker of the ACT Legislative Assembly Joy Burch said Brigadier Cantwell had served as a commissioned officer in the Australian Defence Force for 37 years, including high-level Defence Force liaison roles in the United States and senior roles assisting the Government of Afghanistan in the conduct of the 2009 Afghanistan election.

“It is clear he approaches this role with the high level of personal energy, commitment, integrity and strong ethics needed of an ACT Electoral Commissioner and he is excited by the challenges ahead in leading the Commission,” Ms Casey said. “I look forward to working with Brigadier Cantwell to continue the important work of Elections ACT.”

Belinda Spouncer - 1 hour ago
Jon Billows Canberra has much higher prices for petrol. I have been here for 5 years and was shocked at the prices paid here.... View
The Fluid Complex - 9 hours ago
Ben Oostermeyer Nope. EVERYTHING is going up. Inflation rising significantly because we strangled supply with lockdowns and r... View
News 2

bikhet - 9 hours ago
The union says "jump." The Government says "How high?" View
gooterz - 12 hours ago
Just because someone is vaccinated doesn't automatically mean they are ok with a mandate. Do you really want the school or ed... View
News 51

Noah Gaming - 11 hours ago
The school is fabulous with a great community. Please let’s not tarnish the name of the whole school. I very much feel for... View
Lynne Meredith - 12 hours ago
Thank god, my kids don’t attend Charnwood. This is not the sort of person I want educating my kids!! View
News 257

Acton - 12 hours ago
Kids being kids have died in swimming pools, at the beach, in cars, off bicycles and in every other place and way it is possi... View
Acton - 16 hours ago
If a kid falls out of a tree are we also going to demand the government does a risk assessment and remove them? View
Lynne Meredith - 19 hours ago
Jo Telfer and there on lies the problem. Everyone complains about tween/teens just hanging around but something like the flyi... View
News 5

Paul0075 - 16 hours ago
I don't understand why we're protecting an introduced species. Yes they're lovely to look at and certainly don't deserve to b... View
Community 42

Paul0075 - 16 hours ago
Like many roads in Canberra, the NCDC had this in mind in the 1980s, but traffic volumes were not of a level where it was nee... View
purplevh - 1 day ago
Most of those roads should have been designed and built or improved to have overpass intersections instead of traffic lights. View
News 12

chewy14 - 19 hours ago
Acton, No it's nothing remotely like that. And I say that as someone whose default position is that we should always be biase... View
Acton - 20 hours ago
What has happened here is not as extreme as those examples, but has exposed a latent desire to dob in neighbours, give up che... View
Grant Hunter - 1 day ago
Julie Macklin lots of people aren’t jabbed Brownshirt View
Lifestyle 12

@the_riotact @The_RiotACT
COVID-19 has been tough on us all, but for Asian-Australians it's also brought out a layer of #racism. New publication 'Sweet and Sour' is giving creatives a place to share their #pandemic thoughts and experiences https://t.co/5syW4A3RpE (6 hours ago)

@the_riotact @The_RiotACT
After three generations, the family of #Canberra modernist architect Cuthbert Whitley is selling their #Reid home. A garden oasis on the city fringe, it's been modernised but retains its 1930s charm https://t.co/8usf0kYxZ0 (8 hours ago)