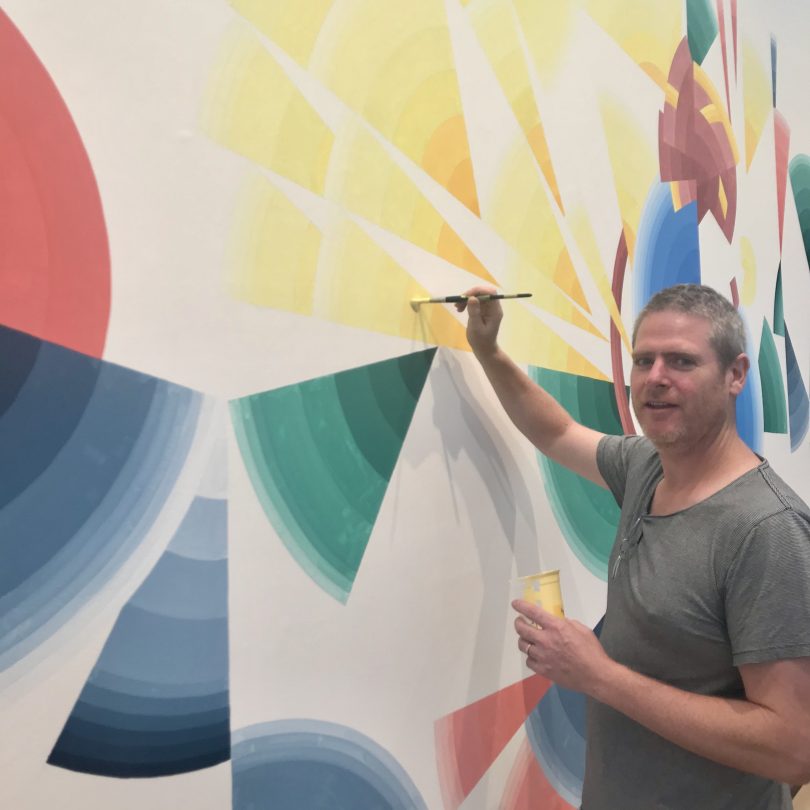 Ham Darroch at work on his wall painting at the Drill Hall Gallery. Photo: Genevieve Jacobs.

Ham Darroch is completely at ease with the idea that someone is going to run a paint roller over many weeks of his artwork in the not too distant future.

“After this, the roller comes out,” he says of his forthcoming exhibition, Propeller, which opens on February 13.

“There’s a performative element for sure. Some of my work is permanent but the others get painted over and that’s OK. I’ve enjoyed it by then, as long as I can make more.”

Throughout the last weeks while the sky outside turned yellow and the air filled with smoke, Darroch has been holed up inside the cool white spaces of the ANU’s Drill Hall, painting hypnotic intersecting geometric patterns along a whole, long wall.

There are six colours and eleven gradations in the work, and the basis for the work is Darroch’s own cubit span – the length of his arm from elbow to paintbrush. The repeating shell-like shapes come from his grandfather’s fold out box ruler, measured in feet and inches.

The painting becomes a replication of his own body: the length of his arms, his reach, the complexity of keeping dense, intricate patterns in his mind and the shapes formed in the negative white space as a result.

But there’s another body hiding in there as well, and it’s a most unlikely one at first blush: Niccolò da Tolentino, the warrior general and favourite of the Medici princes of Florence. 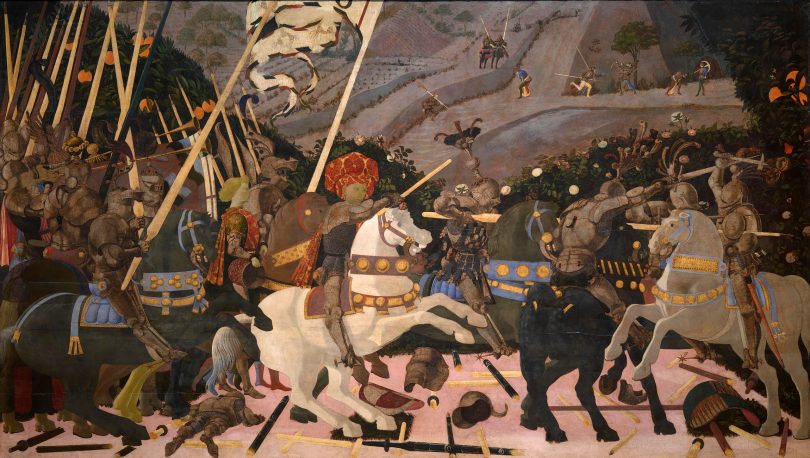 Renaissance painter Paulo Ucello painted a long sequence depicting the battle of San Romano, where Tolentino was victorious for the Medici, leading cavalry into battle wearing an extravagant orange and gold war bonnet amidst a forest of lances.

One of the Ucello works is in the National Gallery in London and Darroch spent a long time looking at it last year while installing work for one the 20th century’s most stripped back modernists, Bridget Reilly.

“There are so many strange things and patterns in the painting,” says Darroch of the moment when you stop seeing the work as a piece of literal representation and start seeing colours and shapes intersecting on a flat surface instead.

“It’s full of objects and artifice and receding depths”.

That formed the basis for his own triptych, where Nico the victorious condottieri appears represented by his extraordinary hat and his shield, exploding among the geometric shapes and the lines of lances formed by the negative white space. The colours all come from the Ucello masterworks. 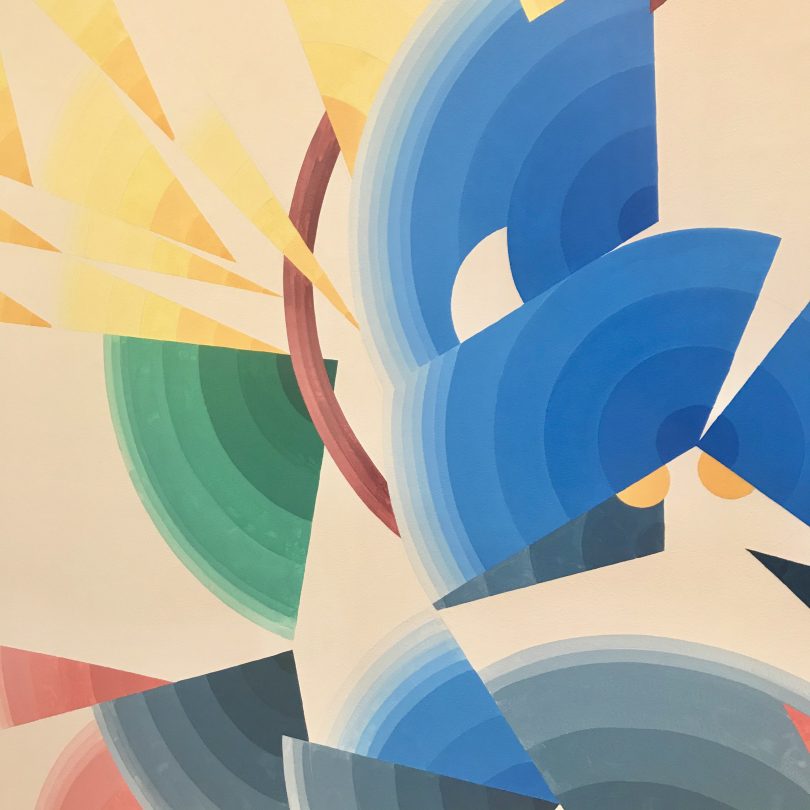 Darroch paints directly onto the wall using pencil lines rather than masking tape, and he uses a compass made to match the length of his arm to draw the spheres. He says the process of creating this dance of colour and ideas was calming and meditative during a terrible time.

“There was some comfort in making something precise and rhythmical, in the sheer volume and size of the work and maintaining that concentration when the world is going to hell outside,” he says.

This is his sixth wall painting since 2014 – there’s another in the stairwell of the Legislative Assembly. Much of his other work takes ordinary objects, like ping pong bats and trowels and even shovels hauled out of the Thames, and transforms them with pattern and colour.

Other works in this exhibition experiment with strict geometry and colour, playing tricks with the viewer’s mind as paintings begin to wink and flash and change colour the longer you look at them. Darroch describes this as the works “having a little dance”.

“It’s just play. My work is very fixed to the idea of having a good time,” he says. “I hope people dance merrily around it and find things to look at that I’ve popped in.

“My proportions are in there inhabiting the painting. It tells a story and then it goes like all stories do, changing every time its retold.”

Simone Eagan-Akuhata - 20 minutes ago
Symantha Lee you’ll be on the list at age 33, just you wait 🤣🤪 but really... let’s manifest those dreams 🤗 View
Ashley Wright - 6 hours ago
Nigem Hamedeh the article is about median house price not highest. View
Sue Sutton - 8 hours ago
What about Forrest? Surely the median is higher than Griffith etc. Maybe there are not enough properties sold🤔... View
News 128