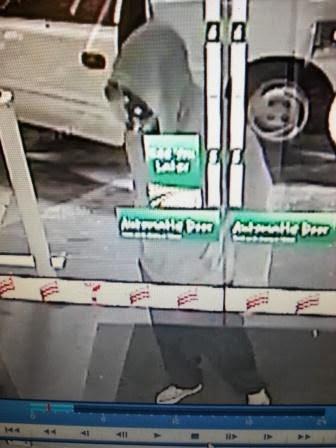 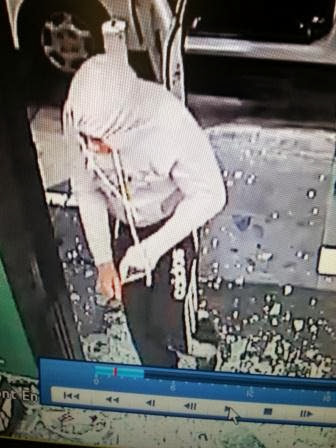 ACT Policing is investigating an aggravated robbery which occurred in Melba in the early hours of this morning (Saturday, September 14).

About 1.30am, a white Hyundai Excel approached the front of the 7/11 store and a man exited the vehicle. He then kicked and forced his way into the store.

Upon seeing this, a staff member sought refuge in a staff room at the back of the store before the offender attempted to unsuccessfully force his way into the room.

The offender then climbed the counter and took a small sum of cash. A second offender then entered the store to assist the man before they both fled.

The first offender was wearing a grey hooded jumper, black tracksuit pants, and a black bandana to cover his face.

Anyone who was in the vicinity of Melba 7/11 at the time of the incident and may be able to assist police is urged to contact Crime Stoppers on 1800 333 000 or via www.act.crimestoppers.com.au. Information can be provided anonymously.
Please see attached CCTV images of the offenders.

If you’ve used a couple of registers it doesn’t take more than a few seconds to find out how to get a new one open. It isn’t a command prompt, just a big button marked “no sale”…

These guys are obviously packing a few more brain cells than the average thief since they actually managed to cover their faces.

Either this is an inside job and they know where the NO Sale button is on the register (as it would probably take a while to find it on the keypad if you were unfamiliar) Or the staff leave the cash drawers either unlocked or with a key in the register cash draw.

almost all electronic cash drawers have a manual release button located on them. It’s designed to enable the drawer to be opened in the event the electronic release doesn’t work. That’s then what the lock is for, because it means neither option works. That’s assuming they have the key to the lock.

end of the day self preservation is what’s advertised to employees in jobs like this, so locking yourself in the back room makes sense.

What I do not understand is that this is the 2nd 7/11 to be robbed in the last week and they have all gone and grabbed the cash themselves ( I am assuming from the register) Either this is an inside job and they know where the NO Sale button is on the register (as it would probably take a while to find it on the keypad if you were unfamiliar) Or the staff leave the cash drawers either unlocked or with a key in the register cash draw.

A pair of scissors used to work fine as a register key back in the long long ago I was doing such jobs.

shouldn’t be too hard to find an older model (’92-’94) white two-door Hyundai with mismatched hubcaps… probably stolen, though :/

Julie Odegard-Forrest - 18 minutes ago
A friend for the cats Dana Odegard-Forrest!!! View
Maria Alcock - 12 hours ago
Genny she looks so much like rabbie View
Moira Begg - 13 hours ago
Kevin Begg Honey bunny please. We have a house View
News 5

Ben Garden - 20 hours ago
Matthew James exactly. That would be too inconvenient to admit science had anything to say on the matter though wouldn’t it... View
show more show less
*Results are based on activity within last 7 days

@The_RiotACT @The_RiotACT
After a long battle, we may finally know what Buckingham palace and HM the Queen thought about the Whitlam government's dismissal https://t.co/9hxZP5ozVN (34 minutes ago)

@The_RiotACT @The_RiotACT
Ready for a tree change? Want a modern country lifestyle? Walgrove in Yass is a charming retreat built in 1905 and it’s on the market now https://t.co/Or6WqNmuDq (3 hours ago)