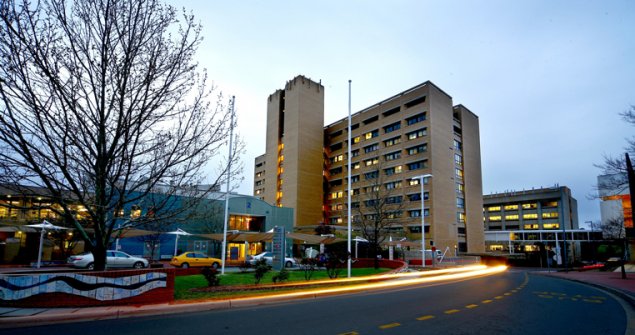 The man who allegedly bashed his former partner to death with a cricket bat at the weekend is under police guard at Canberra Hospital.

Stephen Boyd, a suspect in the death of Tina Kontozis in her Bundeena home on Sunday, was transferred to the hospital on Tuesday morning.

He received treatment for a broken jaw and injured neck sustained in the police chase that led to his arrest in Braidwood on Monday.

Police believe he hit his head on the steering wheel when his car hit an embankment.

Boyd, 51, is expected to stay in hospital overnight and remains under police guard while officers apply for an arrest warrant. Once he is sufficiently recovered from surgery, there will be a bedside hearing, police say.

NSW Police will then likely have to apply to the ACT Magistrates Court to have him taken back into NSW jurisdiction to face charges relating to Ms Kontozis’ death.

About 3pm on Sunday, NSW emergency services were called to a home on Beachcomber Avenue on Sydney’s outskirts where they located the body of a 51-year-old woman.

Upon arrival police also found the woman’s 17-year-old son with an injured arm. He was taken to Sutherland Hospital for treatment.

Boyd was arrested about 5pm on Monday, almost 300km south of the crime scene on Wallace Street, Braidwood, after being pursued by police.

It is believed the pursuit began on the Braidwood Road, Boro, about 4.40pm after Highway Patrol officers recognised his vehicle.

Boyd was arrested and taken to Queanbeyan police station before being moved to Queanbeyan Hospital and then transferred to Canberra.

Why couldn’t he have been taken to Goulburn Hospital?
Look at all the extra paperwork that is being created.
Either that or get some form of mutual recognition on extradition matters between ACT and NSW.
What happened to that MOU on ACT/NSW Regional matters that was signed with great fanfare a few years ago?
There must be a big filing cabinet on London Circuit to hold all the MOUs that have been signed by our current government.

1967 - 4 hours ago
Yup. Hospital cleaners should be paid more. But, One of the mote concerning tbings in this article is that the drivers are on... View
Acton - 4 hours ago
Why the silence and inaction from the Greens/Labor ACT Govt? Why is this newly elected government doing nothing to resolve th... View
Community 22

Clare Jones - 6 hours ago
Why say these are open when the two we've been to still have temporary fencing and one even still had a tractor inside the fe... View
Business 5

Tennis ACT - 8 hours ago
What a great achievement Snedden Hall & Gallop! View
Martyn O'Connell - 20 hours ago
the 333 bus painted up to look like the XPT View
Katy Did - 22 hours ago
I loved that tram when I worked in Civic View
Opinion 16

Rodney Thompson - 10 hours ago
Someone who actually deserves a payrise. View
Opinion 55

Ashley Wright - 10 hours ago
Chris Olsen actually Clinton was right. William Hovell drive had the limit lowered between Coulter Dr and Bindubi street beca... View
Tolga Altinbas - 12 hours ago
Because one is a roadwork sign. And the other one is always there on the pole View
Wang Chow - 14 hours ago
My guess is that they changed the speed limit in Chisholm/Richardson because its cheaper than putting in more speedbumps that... View
News 21

Darron Marks - 16 hours ago
"But in this world nothing can be said to be certain, except death and taxes" View
News 4

Bill Gemmell - 17 hours ago
Additional well-located transport infrastructure is a plus. However, maybe they should be thinking about covering these with... View
Greg Batten - 20 hours ago
Great idea for both ACT light rail and bus networks. View
Ashley Wright - 21 hours ago
Justin Watson it is, the article has that a bit wrong as the “new” stop is at Sandford Street intersection about 1km away... View
Opinion 22

Julie Macklin - 19 hours ago
Many other countries don't have the unpopulated distances that we do. It's a different matter driving an electric car in Euro... View
Lifestyle 1

@The_RiotACT @The_RiotACT
Ten local companies are polishing their pitches for Canberra Innovation Network's annual Innovation Showcase. Here's how you can get involved https://t.co/poNkIicZBH (26 minutes ago)

@The_RiotACT @The_RiotACT
Experts advise people living in the ACT & surrounding regions to be on high alert for grass & crop fires this summer https://t.co/g2KJ0Yo9nP (2 hours ago)

@The_RiotACT @The_RiotACT
The ACT has adopted the new three-tiered Australian Warning System. Find out about the new symbols and what they mean https://t.co/14KXL4E4NZ (3 hours ago)