Political funding - a frightening future for the ACT 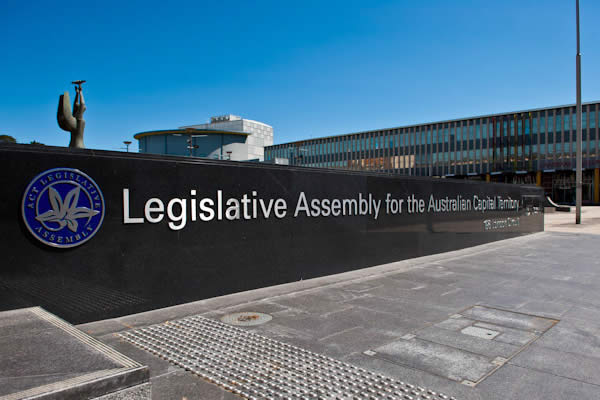 The political landscape of the ACT is changing at lightning speed. Here are some of the most significant changes:

3) The $10,000 limit on donations to political parties has been abolished. This means that an individual or entity can donate $1 million, $2 million, or whatever they like.

4) Individual candidates can only spend a maximum of $40,000 on their campaign, which is a drastic decrease from $60,000. This means that if you are an independent candidate you are legally restricted to spending $40,000 in your electorate while the major parties will spend $200,000 in their electorates.

5) Public funding per vote has increased from $2 per vote to $8 per vote. This means that the major parties will benefit to the tune of somewhere from $400,000 to $1.6 million.

All of these changes have been supported by the major parties, and not one of these changes can be logically considered as an advance for a fairer democratic representation of the people of the ACT.

Surely an increase in public funding per vote could only be justified if there was a decrease in private donations. But the major parties have chosen to increase both. Why? To solidify their power.

By sectionalising the ACT into five, five-seat electorates, the major parties have abolished one seven-seat electorate, which will increase the quota to win a seat from 12.5 per cent to 16.7 per cent. Surely if expanding the Legislative Assembly from 17 to 25 seats was inspired by inclusive democratic principles and a trust in the people of the ACT, the major parties wouldn’t have moved to decrease the chances of smaller parties and independents from gaining a seat.

There is no reason why the ACT could not have six, seven, eight, or nine-seat electorates other than it frightens the major parties.

A more insidious development in the changing political landscape could be this: that the increase of public funding could encourage independents and small parties with no real political convictions to join the 2016 race to simply make a buck. For instance, a vote of 3,000 would translate into $24,000 instead of $6,000 of public funds into the hands of individuals.

The ACT can expect a large number of small parties to join the race for this reason, and this reason alone. That money, and not humanitarian conviction, could be the incentive to partake in Australian democracy is to impoverish the very modern ideal of democracy.

In the last federal election, nearly a third of Australians voted for non-major party candidates yet out of the 226 seats of the Upper House and Lower House combined, there are only 23 cross-benches (including the Greens). This represents about one-tenth of the collective will of the Australian people instead of a third.

Rather than echo the disparity between the will of a citizenry and the result of an election, the ACT should be an exemplar of democratic principles. We have to ask ourselves: do want a mature democracy like those of Europe or Japan, or do want an impoverished democracy like the gridlock and corruption of America?

When the two Goliaths of political power oppose for the sake of opposition only, it can be quite frustrating. Yet when the two major parties collude to strengthen their grips on power, it disempowers a citizenry to a frightening reality. And that reality is a world where Goliaths reign free with their armour and shields while the Davids are robbed of their staffs and slings.

Steven Bailey is the first officer and lead candidate of the Australian Sex Party – Canberra.

I gave up years ago & am resigned to being ruled by my ALP Overlords until I croak.

Ditto. ACT Labor Gov’t can basically do what ever they like (as they are now doing !) because IMHO : the increase in the number of electorates (though the new boundries are yet to be unveiled), the financial aspects of the ACT electorial reforms (noteably the increase from $2 to $8 per vote obtained & uncapping of donations), the perception that the ACT Lib’s are pretty much ineffective and what is obvioulsy the rusted on left leaning of so many ACT voters anyway, will probably lead to a re election of the ACT Labor Gov’t – maybe with as assist from the Greens again. Thats decades of more of the same. As deprssing a thought as that is……….

I gave up years ago & am resigned to being ruled by my ALP Overlords until I croak.

Okay Steven. There is a reason why the ACT shouldn’t have 6, 7, 8 or 9 seat electorates. We will end up with an unworkable assembly with a bunch of crack pots like we have had in the past. The simple point is that if you get the quota you get the seat. Everyone is in the same boat. It is only parties and candidates like you and the Greens who are are on the fringe who complain about five seat electorates.

I understand your sentiment Henry but with only one house it is extremely important to have a diversity of voices rather than a group of people who will always vote as a block instead of their consciences. Democracy seen through the lens of only two parties means one of two things: carte blanche or gridlock. Democracy at its best is when those in power trust a citizenry to make their choices without the hindrance of the major powers limiting their choices – and swallowing massive amounts of public money.

The public should always be wary of an authority that feels the need to solidify its power because there can be only one reason for doing it: they are losing favour with the people.

I had no idea about this. Thanks Steven. Such a blatant grab for the filthy lucre from the majors. If they’re hurting financially why don’t they get out there like small parties have to do and run a chook raffle or go begging to friends rather than plunder the public purse. I hope the Sex Party runs with this at the election.

Okay Steven. There is a reason why the ACT shouldn’t have 6, 7, 8 or 9 seat electorates. We will end up with an unworkable assembly with a bunch of crack pots like we have had in the past. The simple point is that if you get the quota you get the seat. Everyone is in the same boat. It is only parties and candidates like you and the Greens who are are on the fringe who complain about five seat electorates.

Thanks Garfield. Yes, it’s extremely concerning, and it will definitely be an election issue.

The move is contrary to the supposed egalitarianism of Labor and the supposed ideals of liberty of the Liberals. Every MLA who voted for these changes would have known that in their hearts.

Steven, you’ve missed the $20,000 per year per MLA administrative funding that is in addition to the election funding. It flows overwhelming to the major parties and is money for nothing. At least with the election funding all candidates/parties will be eligible for it as long as they get 4% of the vote. If the current distribution of MLA’s continued after the 2016 election, Labor & Liberals would receive about $900,000 each in admin funding up to 2020. They can spend that money on admin functions meaning their investments and membership fees just accumulate into huge campaign funds. If they win the same votes as they did in 2012, they will get $700,000 in election funding. So in total they are giving themselves $1.6m each election cycle but can only spend $1m on campaigns. Why do they need the extra dollars and what does the public get for their money? Minors and independents have no chance of competing financially, meaning we could well be on the road from a democracy (power vested in the people) to an oligarchy (power vested in the few).

The most democratic electorate would be one electorate. But this doesn’t suit the bigger parties. It’s all about winning, not democracy.

Well written Steven. Agree with all that. Most of these issues have been raised on RA previously, without a great deal of engagenment by Rioters – despite the seriousness of these reforms.

Will be interesting to see if any developers, Tram consortia and/or Clubs donate to which parties.

Once again, just both major political parties with their snouts in the Ratepayers trough I’m afraid.

Democracy for sale! Don’t get sued Steven. Seriously though this is a really important issue. I think its gone a bit under the radar.