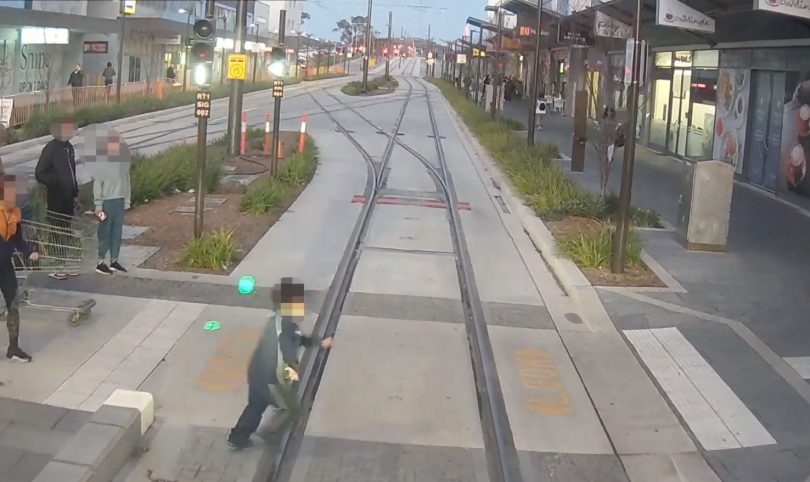 The message to be alert and safe around light rail is still to get through to some Canberrans if a new near-misses video showing drivers, cyclists and pedestrians taking shocking risks is anything to go by.

Transport Minister Chris Steel has posted a new dash-cam video compiled by Transport Canberra on Facebook of recent incidents drivers have witnessed or had to contend with.

One scene shows a young cyclist trying to cut across the corridor crashing onto the tracks in the path of an oncoming light rail vehicle. Another has a woman with her head turned away stepping across the tracks without looking.

One car actually turns into the light rail corridor in the city before realising it is not the roadway, while a taxi turns across the tracks in front of a light rail vehicle.

Children can be seen dashing across the tracks in Gungahlin in front of the light rail vehicle, needing only to slip for a tragedy to occur.

Be alert and be aware or you might be an unwitting star on the next near-misses video. Photo: File.

“If you are a pedestrian, follow the signals and look in both directions before crossing light rail tracks because the light rail vehicles could be coming from either direction at any time,” he said.

“If you are driving around light rail follow the traffic signals and don’t stop across the track, or drive along the tracks.

“We don’t want to see you on the next near misses compilation video.”

Plenty of cars still want to park over the intersection of Barton and northbourne! Tram couldn't get through the other day!

It happens in Melbourne too: https://www.youtube.com/watch?v=_uLpgrcLOZM

Two of the facts of life are that eggs don’t bounce and trams don’t swerve.

Can they be fined?

Instead of automatically blaming the pedestrians, drivers, cyclists and everyone else involved in these near misses a responsible transit authority must pay attention to its own culpability. The video clearly shows people do not hear the approaching tram and road signage that is confusing and inadequate. But the paid spruikers of the tram would rather blame the public for accidents than admit their own design incompetence.

Darwin jokes aside, there will be fatalities, and I urge government to do more than videos. There was a short blitz after the last near-fatal in Civic, but there should be a persistent (random, unannounced) blitzes on both drivers and pedestrians.

This Tram just keeps on giving

Let Darwin work it out..

Is “don’t walk in front of speeding trams” really something we need to remind people of in 2019?

Claire Majella There are people right now who earnestly believe that the earth is flat.

It’s not just around the light rail, this afternoon I saw an elderly person cross Yamba Drive between the two sets of traffic lights (I think one street is wisdom st, where there are two sets close together). Hunched over, stick in hand, ambling across the road and I swear as she stepped off the median strip she didn’t even look! But had to move more quickly as cars moved away from the lights!

Well, there’s the quick & the dead and we have to curb population growth somehow ….

Rob Thomas - 2 hours ago
you wish to retire somewhere no one wishes to live? well good luck with finding services there. View
What's On 10

Leanne Kerri Pascoe - 3 hours ago
It should be legal when you are unable to care for your self. View
jorie1 - 11 hours ago
Well said Chewy14. Certain people cannot just change the Constitution because they feel like it or think it will work better... View
JS9 - 12 hours ago
You have no idea whether the majority want it or not at this point in time. That statement may have held in the late 80's/ear... View
Community 9

Karen K Holliday - 4 hours ago
Lucy Long it will be sad to see it go but I’m excited for a new bridge. View
Steve Tsiamis - 7 hours ago
John Bosch I lock myself at home on these weekends. A short walk for a fish down at Cullendulla. View
John Bosch - 7 hours ago
Yep. Hopefully the traffic won't be backed up half way to Mogo like it was yesterday afternoon. View
Food & Wine 111

Maya123 - 4 hours ago
That's how I felt when I used to rent. I could only afford very cheap rent. I put on extra clothing in winter and would rathe... View
jorie1 - 5 hours ago
Rates and land tax are huge amounts of money. The ACT government only cares about making money. On my small property (it's an... View
bj_ACT - 5 hours ago
My niece is the second person I’ve had recently complain that they have ended their long term cheap lease due to required p... View
Community 2

Shane L.J. Ryan - 10 hours ago
Dorothy Tangney was the first woman elected to the Australian Senate in 1942. Dorothy Tangney Place in Parkes, ACT is named i... View
Lifestyle 3

Lauren Nihill - 11 hours ago
We are all so proud of you Kirrah! View
News 4

keek - 12 hours ago
They are an introduced pest and should not be roaming wild in any case. View
News 76

JS9 - 12 hours ago
Very true JC - as you say a lot of information is given away voluntarily, and with pretty much every phone having GPS in it t... View
JS9 - 12 hours ago
So you turn up to cafes and sit down for a lunch with people who you don't even know their names then CR? Surely across a gro... View
show more show less
*Results are based on activity within last 7 days

For more than 20 years, Rodney Plumb has quietly enjoyed one of the best views in the Eurobodalla, if not...
What's On 10

Allycorn, the giant pink unicorn from New York, will gallivant around Canberra for the first time this Saturday (6 March)...
News 0

The Chinese-Australian man who was racially abused by a school-aged boy in a now viral video has said he does...
*Results are based on activity within last 7 days

Many Canberra renters are suffering through heat waves and cold snaps or paying through the nose to heat and cool...
News 28

The developer of the problem-plagued Gungahlin pool has been absolved of liability for building defects, including if further damage or...
Food & Wine 18

There’s no chance of sneaking in quietly for a meal at Madam Lu. An ear-shattering “Helloooooo!!!!” rings out across the...
Best of Canberra 38

Did it start when you hauled those buckets out during a recent storm? Did you hear shaking sounds overhead that...
Opinion 15

Vanessa Low’s life is a lesson in light rail safety

@The_RiotACT @The_RiotACT
Hot in the City: Lilotang in Barton’s Realm Precinct has a revamped interior, a new menu & 70+ varieties of whisky https://t.co/9eDFsw4aQp (53 minutes ago)

@The_RiotACT @The_RiotACT
Kambri's student-led exhibition pairs artists with academics from across ANU to provide a unique take on the knowledge & research of the uni https://t.co/YPf4UU0xNF (2 hours ago)

@The_RiotACT @The_RiotACT
A group of Canberra teenagers have been filmed racially harassing Dickson cafe staff. But owner Vincent Wong says he wants the incident to promote education, not hatred https://t.co/w2FheRpXhz (3 hours ago)