Simon says give me your thoughts on planning Kingston 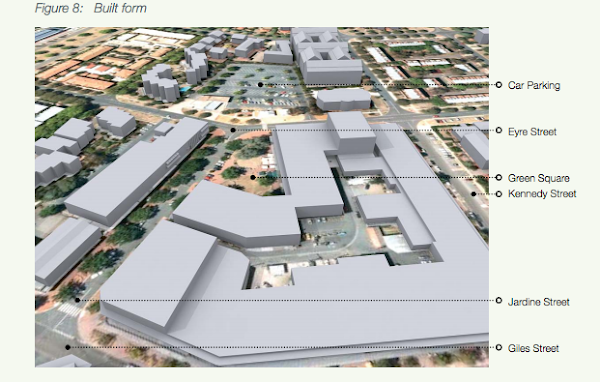 Simon Corbell has announced the kickoff of Draft Variation 314 to nut out the future of the Kingston Centre:

“Draft Variation 314 (DV314) to the Territory Plan draws on findings from the Kingston Centre master plan and includes controls on development of the car park on Eyre Street and increases to some building heights in the centre,” Mr Corbell said.

“DV314 protects the existing low scale street frontages and awnings that give the core shopping area its character while allowing taller buildings in Highgate Lane.

“The Eyre Street car park site will permit commercial mixed-use development of up to six storeys with a requirement to retain the existing level of parking.

“The ACT Government is currently preparing the car park for sale and arrangements will be made to ensure loss of parking during construction is kept to a minimum.

“To revitalise and encourage pedestrian activity in Highgate Lane, future development in the core shopping area will have to provide pedestrian connections through certain blocks.

“Any future development of commercial blocks adjacent to Kennedy Street must have vehicle access and parking to the rear which could allow for a future rear laneway,” Mr Corbell said.

“Kingston was the one of the first commercial centres in Canberra but over time, competition from other centres such as Manuka and Fyshwick has resulted in a gradual loss of economic vitality.

“These planning changes will provide a much needed economic stimulus through the new supermarket and new development opportunities, but the changes come with a caveat to retain parking and that the character of the centre is retained,” Mr Corbell said.

At some point soon one hopes the full variation will be available online.

UPDATE: The documents are now online.

Thank goodness Canberrans in the inner north could see what was done to Kingston – future slum – and have been able to avoid recreating such an almost-all-high-density-renters group of suburbs north of the lake. Other than on the very lakefront, Kingston is ghastly and it will be very hard for planners to improve it without replacing some of those nasty apartments with well-designed, spacious housing (which of course won’t happen while the developers are in charge).

But it’s the organic smugness that comes with being unbearably better.

Whether we be Big-Endians or Little-Endians, or across-the-border-Endians, we all of us, as PJK would airily point out, are simply camping out.

Back on topic, I expect these exciting plans, when realised, will result in an addition to Canberra’s existing stock of over-priced commercial real-estate and will see more people lured (to their enduring regret) into equally over-priced and indifferently planned, designed and constructed residential accommodation. In the meantime, the construction shemozzle may well kill of all but the hardiest of the existing businesses in Kingston.

Gosh I hope they hurry up with this, once Kingston Foreshore is open for business, a lot of people aren’t going to bother with this parked out, antiquated precinct wrapped in a crumbling asbestos shell.

I’ll raise you two the old south and see your inner north!

I know nothing of smugness.

At what? A smugness competition?

But it’s the organic smugness that comes with being unbearably better.

It would sure as hell beat living in Tuggers or Belco!

Some people already think Kingston is a pretty desirable place to live.

May Agnew - 5 hours ago
MOST DEFINITELY -so many homeless -a national DISGRACE -and wealthy developers becoming wealthier still - causing a concrete... View
George Watling - 10 hours ago
A recent OECD review of 300 Urban Planning studies from across the world has demonstrated that increasing the compactness of... View
George Watling - 11 hours ago
This story is not based on evidence or research. Higher density planning policies have been driving up property prices around... View
Community 7

Lauren Kay - 13 hours ago
I was gutted when I found out Ash. Nigel was so lovely and it feels like I knew him forever. View
Ashleigh McHugh - 13 hours ago
Lauren Kay isn’t it so sad... View
Lauren Kay - 14 hours ago
Drew Forrest I've got a condolence card, but happy to put more cards in a larger envelope if you or anyone up your way wants... View
show more show less
*Results are based on activity within last 7 days

@The_RiotACT @The_RiotACT
More than 1000 Canberrans across six suburbs have been given the opportunity to change the look of their streets as part of a pilot forestry program. What trees would you like to see planted? https://t.co/dP9eU2Q2hq (29 minutes ago)

@The_RiotACT @The_RiotACT
The eight-year legal saga involving Witness K, which shed light on Australia's bugging of Timor Leste in 2004, has come to an end with the former spy sentenced in Canberra yesterday https://t.co/yIT4TW8TlT (40 minutes ago)