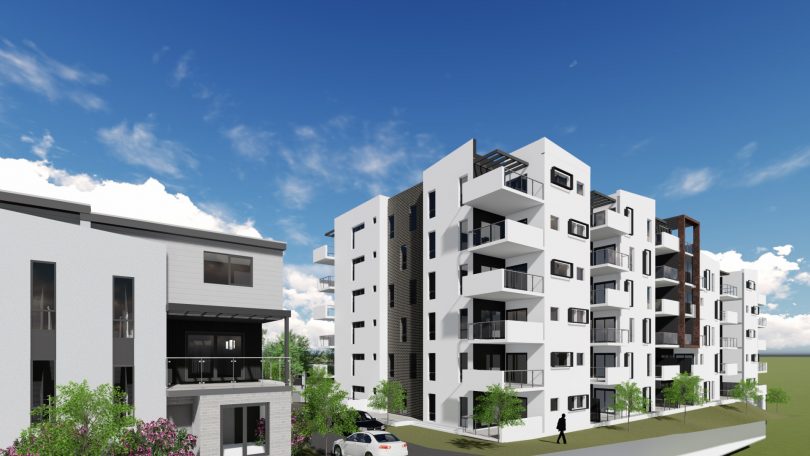 An artists impression of a section of the development, including the six-storey apartment block fronting John Gorton Drive. Image: Kasparek Architects.

Plans have been unveiled for a six-building development in Coombs that will deliver 25 terraces and 68 apartments on one of the Molonglo suburb’s few remaining blocks.

Di Iulio Constructions is proposing the development for Block 3 Section 53, at the intersection of John Gorton Drive and Southcott View, which is zoned RZ5 for high-density residential.

Designed by Kasparek Architects, the proposal is at pre-development application stage and has been released for public consultation.

The project website says the six buildings will range from three to six storeys and provide a mix of two, three and four-bedroom dwellings on the 7432-square-metre wedge-shaped site. 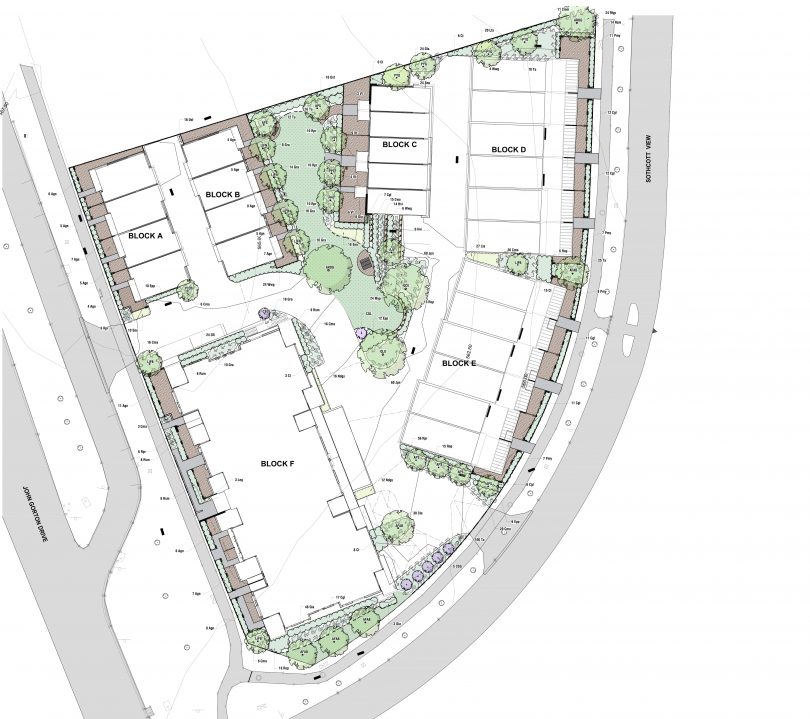 The biggest sits on the corner of John Gorton Drive and Southcott View, and will also have two basement levels for underground parking.

The other buildings are all three storeys with one on John Gorton Drive, two lining Southcott View and two more in between.

Access to the site’s internal road system is from John Gorton Drive and Southcott View, with a total of 166 parking spaces provided including 24 for visitors – 19 on-site and 5 off-site.

The landscape design shows a green communal space with shade trees spreading from the centre of the site to the western border between the two buildings not fronting roads.

The site will also include a network of connected lit paths.

The website says apartments will enjoy good solar access, with the floor or internal wall of a daytime living area of at least 70 per cent of apartments on a site receiving at least three hours of direct sunlight between the hours of 9 am and 3 pm on the winter solstice (21 June). 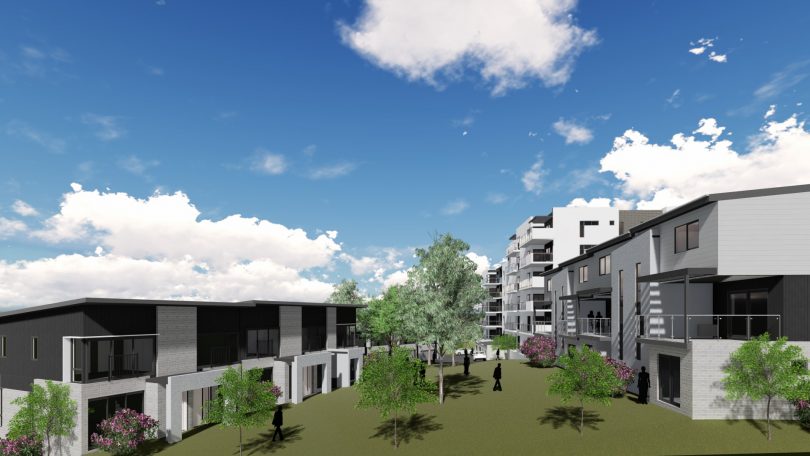 An internal view of the proposed development. Image: Kasparek Architects.

Balconies are screened for privacy, restricting the direct line of sight to adjacent dwellings.

The proponent is exploring energy efficiency options and a water sensitive urban design strategy is being developed to promote sustainable water use, with deep root planting being considered to accommodate on-site infiltration of stormwater run-off.

The site is close to open space nature reserves, cycle networks and pedestrian paths, and served by public transport along John Gorton Drive.

“The proposed development has been architecturally designed to deliver a high standard of residential amenity and provide a cohesive relationship with the neighbourhood and the John Gorton Drive streetscape,” the website states.

To learn more and register visit the project website.

ChrisinTurner - 4 hours ago
But we have $billions to replace buses to Woden with slower trams. View
Opinion 16

Sofia Zivkovic - 5 hours ago
No point, comp is getting worse each year. View
Tim Mitchell - 12 hours ago
The joint A-Leagues men and women trophy really strengthens Canberra's bid. Would be strange having Canberra as the only team... View
Community 142

Ota Save - 7 hours ago
Sue Sutton No worries Sue. Happy to help ❤️ View
Sue Sutton - 7 hours ago
My Mum has wonderful neighbours who have been helping keep her lawn in check. Thank you Ota and family xx... View
Bill Gemmell - 8 hours ago
Barbara Eglitis I was wondering how long it would take. Seriously, I had the Fowles St Park project in Weston in mind. Sugges... View
News 34

purplevh - 7 hours ago
If a dog ever chased me on a bike I would turn around and chase it. They soon get the message when that happens.... View
purplevh - 7 hours ago
I like your point about heavy vehicles but the same goes for a motorcycle licence BECAUSE you are the one most likely to be h... View
Opinion 13

kenbehrens - 8 hours ago
A few years ago when we were visiting our son in Sydney, there were blankets and items of clothing under shelter on the stree... View
jwinston - 8 hours ago
harcm said “tim_c – what a load of rubbish you talk. What if your schooling was completely disrupted by domestic violence... View
Acton - 8 hours ago
The money you are giving out of misplaced guilt to a street beggar is just funding their drug, smokes and/or booze addiction.... View
News 1