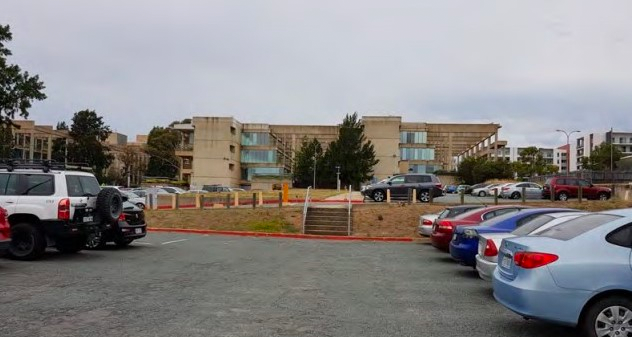 The western end of heritage-listed Wings 4 and 5 of the Cameron Offices, viewed from the site of the proposed towers. Photo: Morris Property Group’s EPBC referral.

A twin-tower, mixed-use development rising 27 storeys is being proposed for the corner of Cameron Avenue and Benjamin Way in the Belconnen Town Centre, according to documents referred to the Commonwealth under the Environment Protection and Biodiversity Conservation Act due to its proximity to the heritage-listed Cameron Offices.

The joint venture between, Amalgamated Property Group and Morris Property Group have submitted an application regarding the proposed development which will include two 23-storey residential towers sitting on a four-storey podium, on Block 11 Section 44, now a mainly sealed public car park that had been part of the former Cameron Offices car park.

The development would also include retail and commercial activities along the Benjamin Way frontage, a child care centre, and resident and public parking within the podium. The top deck of the podium will be landscaped with a pool and barbecue area.

It would join a range of other high-rise residential towers in the Town Centre, parts of which are allowed to have building heights up to 28 storeys under the Belconnen Precinct Code.

The application says the land is subject to the National Capital Plan and the Development Control Plan will need to be amended in relation to building heights for the towers to be approved.

The proposed development is located directly 34 metres west of the Commonwealth heritage-listed Wings 4 and 5 of the remnant Cameron Offices, which were the first major buildings to be built in Belconnen but partially demolished in 2008. 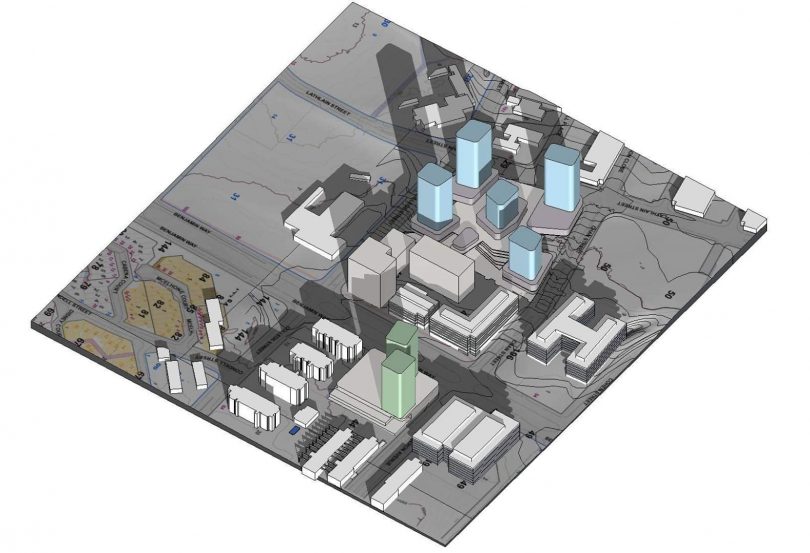 The proposed towers are in green, in this sunshade diagram from the EPBC document.

The application says the proposed development does not trigger an environmental impact assessment under Commonwealth or Territory legislation but a Statement of Heritage Impact has been prepared relating to possible impacts on Wings 4 and 5.

The proponent says there will be no physical impact on the heritage place in terms of overlooking, overshadowing, or wind turbulence.

The Statement of Heritage Impact says the remnant Cameron Offices is sufficiently robust to withstand the changing environment around it, and the proposed towers will not adversely impact on its heritage values.

“The proposed development provides an opportunity to initiate a master plan that can achieve the objective of the DCP, and of the Belconnen Town Centre Master Plan. The proposed development provides an opportunity to resolve the issues of the Cameron Offices setting by linking the various developments through an integrated landscape plan, while at the same time providing a public benefit by converting the roads and paths around the building into active pedestrian spaces,” it says.

The project is not the first to be undertaken by either developer in the Belconnen Town Centre with the joint venture having successfully completed other nearby residential developments whilst they also continue to redevelop the adjacent Benjamin Offices precinct. Morris Property Group were also the developer for the 240 unit mixed used precinct known as Sentinel and the recently completed Parc Apartments & Villas opposite the Jameson Centre in Macquarie.

Construction works are subject to Government approval and market conditions.

Oh great. We need another twin towers….rack ’em and stack ’em. Pretty sure there is still some land in ACT that could be used instead of building these monstrosities.

One hopes all the government departments move away when they realise none of their staff can commute to work and find a park.
ACT government trying for force public transport at the same time as crippling it. 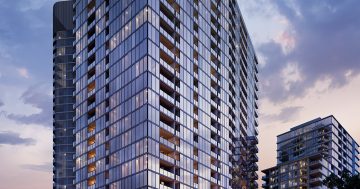 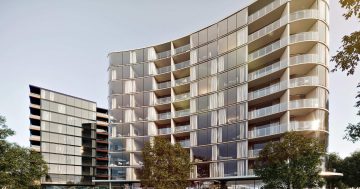