Whose house is it anyway? Young citizens locked out of Parliament House 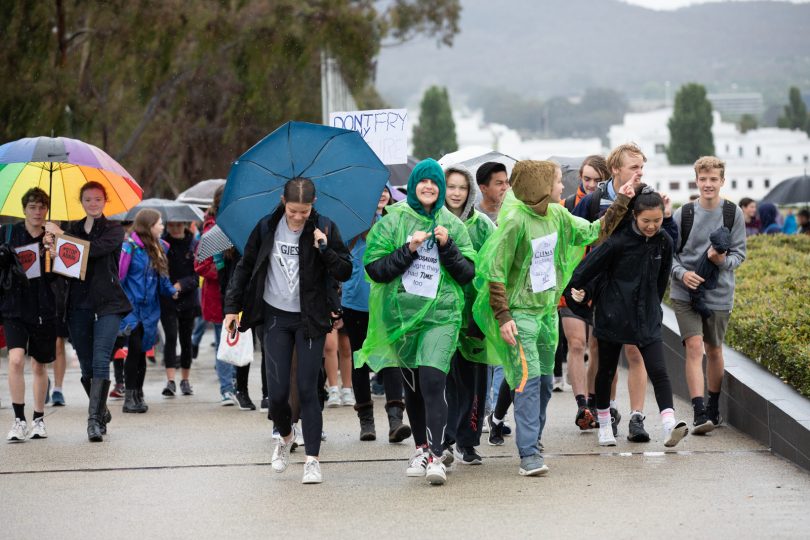 Few people could have missed reports of the mass student action that occurred last week, which saw thousands of students from all over Australia participating in rallies. At these rallies, they expressed their fears about the impact of climate change. They called on politicians to act on the evidence around climate change. In Canberra, more than 200 students converged on the lawns of Parliament House on a rainy Wednesday morning. Student leaders spoke eloquently and persuasively. They outlined their concerns and their hopes that politicians would do more to respond to the issue of climate change.

As well as speaking to each other, they wanted to speak to politicians. In the lead up to the day, the Canberra students had organised meetings with a number of MPs inside Parliament House. There were also a number of politicians who had indicated that they might be able to meet with them, but had not finalised times by the morning of the event.

The Canberra rally proceeded in line with all the required permissions and protocols. The crowd was courteous and well behaved. At the end of the rally, the students and their supporters moved up to Parliament House. They left behind their signs and lined up quietly to enter the building to attend meetings and access public areas. There was no intention to protest and no intention to disrupt the business of parliament. Despite this, when the young people attempted to enter the building they were prevented by the Australian Federal Police (AFP).

This was a large group. There was probably around 200 people. As such, you may have expected a bit of time might be needed to enable the young people to get through security and into the building. However, there was no justification for these citizens to be prevented from entering the building for hours. While the majority of this group were under the age of 18, there were parents and guardians who accompanied the young people. Group organisers (also young people) communicated effectively to the group around instructions provided by the AFP, and the young people immediately complied with all directions provided. Throughout a long period of negotiations with the AFP and Parliament House security, the young people were patient, quiet and orderly. 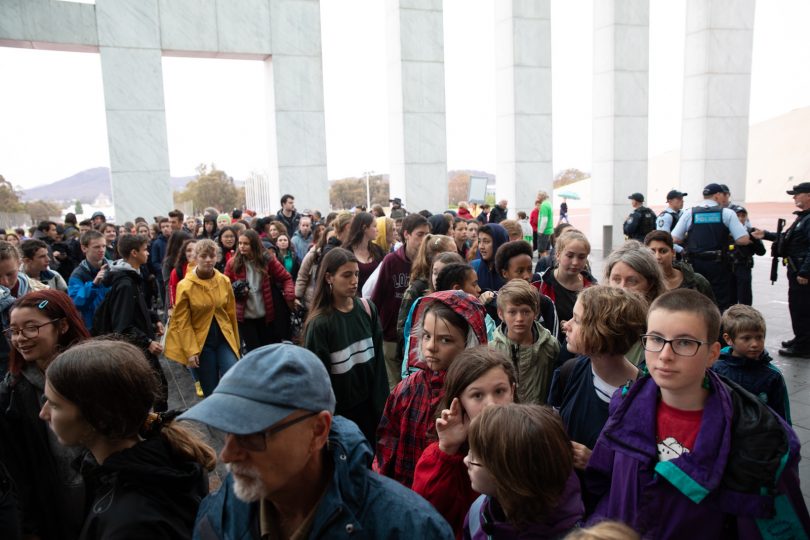 Young people and supporters wait to get into Parliament House.

After more than two hours, the AFP agreed to let the young people in. Once inside, we didn’t see a breakdown in democracy or decorum. There were no protests and riots. What did occur was a breakout in direct democracy. This saw young people engaging directly with their elected representatives. They discussed issues, and sought information from their representatives on their views on key issues. The young people found that while politicians didn’t always agree with their perspectives, they did listen. The politicians who did engage left the young people feeling valued and validated. It was a much-needed antidote to some other politicians responses. Few of these young people who will one day be voting will forget the Prime Minister’s comments in Parliament or a senior minister’s comments on talkback radio in response to their intention to participate in a bit of activism. 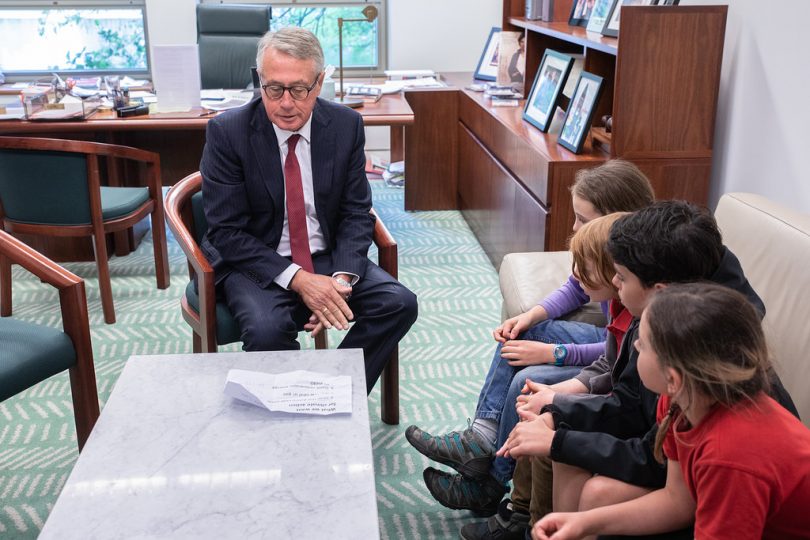 I was a student when the new Parliament House was opened. At the time of its opening, a key message was that this was ‘the people’s house’. The building was designed so the citizenship could walk atop the building. A wide pavilion was designed to welcome people in its doors. It was a promoted as a space that belonged to Australians and where ordinary people would be able to access.

Much of that is now lost. We now have a fence preventing public access to the lawns on top of the building. AFP officers roam the front of the building with automatic weapons. Inside the Parliament this week, encryption laws are being rammed through Parliament by a Government that argues that there is no time to scrutinize these laws. This is despite a range of groups raising concerns about the reach and implications of these laws. Disturbingly, we see groups of young people as a potential threat, while providing special access passes to lobbyists from the arms, alcohol and fast food industries.

I know we need to be safe. We live in an age where we do need to sacrifice some freedoms to ensure this. However, in an age where any questioning is discouraged, do we really understand what we are losing in the name of national security? Do we fully understand how these powers can be used? Do you think we have the balance right regarding freedom of access to our Parliament and national security?

I think this parliament has forgotten who they work for and who pays their wages.
Maybe Australian taxpayers should go on strike and stop paying their politicians until they remember what their job is.
These LNP politicians have become a self-entitled entity who feel they don’t owe anyone anything.
They don’t want to hear the voices of the people.
This is not democracy in action.
This is democracy inaction.
So much for Morrison’s bus ride to “hear” people….

Annie Wyer, no they haven’t, it is the large corporates and fossil fuel industries that sponsor them so they know exactly who they serve. It is us poor schmuck voters who are deluded by the sham of elections every few years where they do a number on us to make us think our vote counts. Then they get back to the serious business of feathering the nest of the corporate elites. The kids and adults are taking back democracy through Extinction Rebellion and it is very inspiring. On climate change there is not a second to lose – tick-tock radical decarbonisation of global energy by 2030.

Old Parliament House was the business, Members had to walk through the foyer and as such would be confronted with constituents.

Break down the door with people power

Well gee Rebecca, what did you expect? A group of 200 people approach parliament and you think they’ll just throw open the doors and say ‘whatever’?
They WERE allowed in after all, and given an audience, so surely that’s a good result. Or perhaps the group’s ‘mentors’ would rather have seen a minor but newsworthy fracas?
This latest trend of using impressionable kids is, to me, a new low in Australian politics.

I agree that we need more personal freedoms not less.

Which is why I find this article rather strange from a member of the Greens, who’s policy positions could hardly be said to promote individual freedom in general and are often the exact opposite.

Why do we generally have reducing freedoms? Because people and political parties are extremely selective in where they support that principle which lessens their position in other areas.

A bit of logical consistency goes a long way.

Protests at APH have always been restricted to the Lawns.