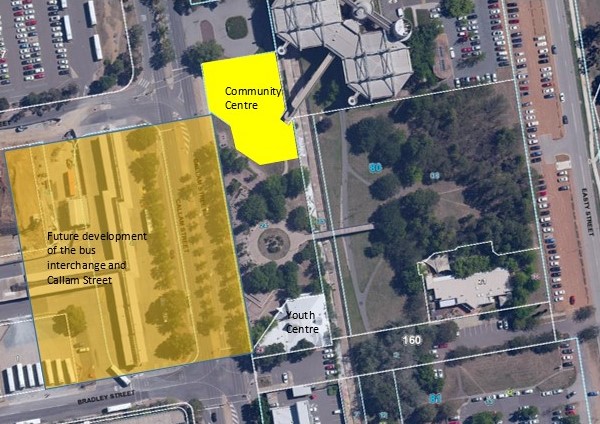 The site of the new Woden Community Centre. Callam Street is being touted as Woden’s main street.

A new multi-purpose Woden community centre will be built on Callam Street next to the heritage-listed Callam Offices and opposite the bus interchange.

A tender for feasibility and design has been released following the ACT Government’s announcement last year to proceed with the project and $1.75 million allocated in the 2019 Budget in June for the design work.

The new centre will enable Woden Community Service to consolidate its operations, which are spread across four separate locations, with a possible new 100-place childcare centre to be built nearby to replace its Lollipops centre on Corinna Street.

According to the tender documents, an option for the child care site is Community Facilities zoned land south of Callam Offices on the eastern side of Yarralumla Creek fronting Easty Street. Other sites are being considered but the tender brief is only for the Easty Street site.

WCS will manage the building on behalf of the Territory and the community centre may also provide Community Services Directorate child and family services focusing on children aged up to eight years.

The tender documents say the community centre will be a focal point for the proposed future public transport mall and will integrate with Woden Town Park and Arabanoo Park to create a seamless, accessible and functional public meeting space in the heart of Woden Town Centre.

The site will also interact with the heritage-listed Callam Offices and the successful tenderer will explore the overall development of the precinct and, in consultation with the ACT’s Design Review Panel and the ACT Heritage Council, establish an agreed set of design principles for the precinct.

The community centre will include a multi-purpose accessible meeting hall with exercise and exhibition areas, as well as a small performance space.

It will have specialist consulting rooms, smaller multi-purpose rooms, common reception area and publicly accessible lounge and a workshop and office space for a visual arts coordinator.

There will also be food preparation areas and the potential for a privately operated cafe.

The brief also includes parking, with spaces for people with disabilities. 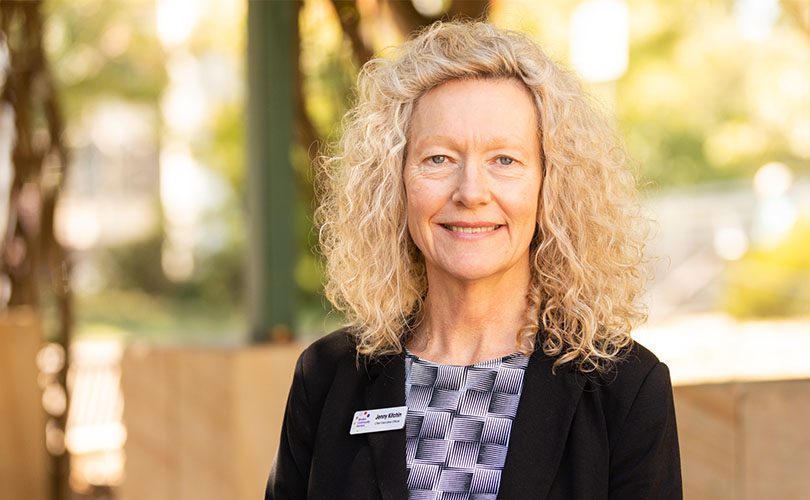 Jenny Kitchin, CEO of Woden Community Service, will play an active role in the full scope of design and service offerings. File photo.

Minister for Urban Renewal Rachel Stephen-Smith said that after 50 years of service, Woden Community Service had outgrown its current building on Corinna Street which lacks the space to hold meetings, provide services and accommodate community activities.

“The purpose-built community centre will not only be the new home for Woden Community Service but also provide a place for a range of integrated services and spaces for community activities and events,” she said.

“The planning and investment the ACT Government is making in social and transport infrastructure will help establish Callam Street as the main street of Woden.”

Transport and City Services Minister and local member Chris Steel said the project supported the broader regeneration of Woden Town Centre together with the Government’s investment in the adjacent Woden interchange redevelopment and extension of light rail.

Chief Executive Officer of Woden Community Service, Jenny Kitchin, who will play an active role in the full scope of design and service offerings, said it was a fantastic opportunity to develop facilities that will better service the needs of our community.

“We will be asking our clients, volunteers and staff in each of our service areas about what they would like to see addressed through this new community infrastructure and to help engage the community in its development,” she said.

The successful tenderer, due to be selected by mid-October, will undertake ongoing engagement with the Woden community and key stakeholders to ensure the design and service offerings meet the current and future needs.

According to the tender timeline, all the information needed for lodgement of a development application is expected to be finalised by this time next year.

So what is going to happen to the old CIT site?

“…..will help establish Callam Street as the main street of Woden.”

….sounds like urban-planning-speak for effectively closing Callam Street to through (private) vehicular traffic, to make way for the usual “artist’s impression” fantasy of elegant, affluent consumers (with a sprinkling of svelte joggers and cyclists) wafting around a shared zone, bordered by swishy cafes and shops. Dream on. 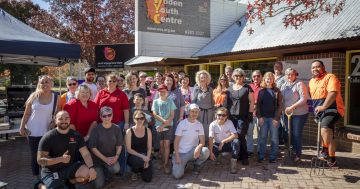