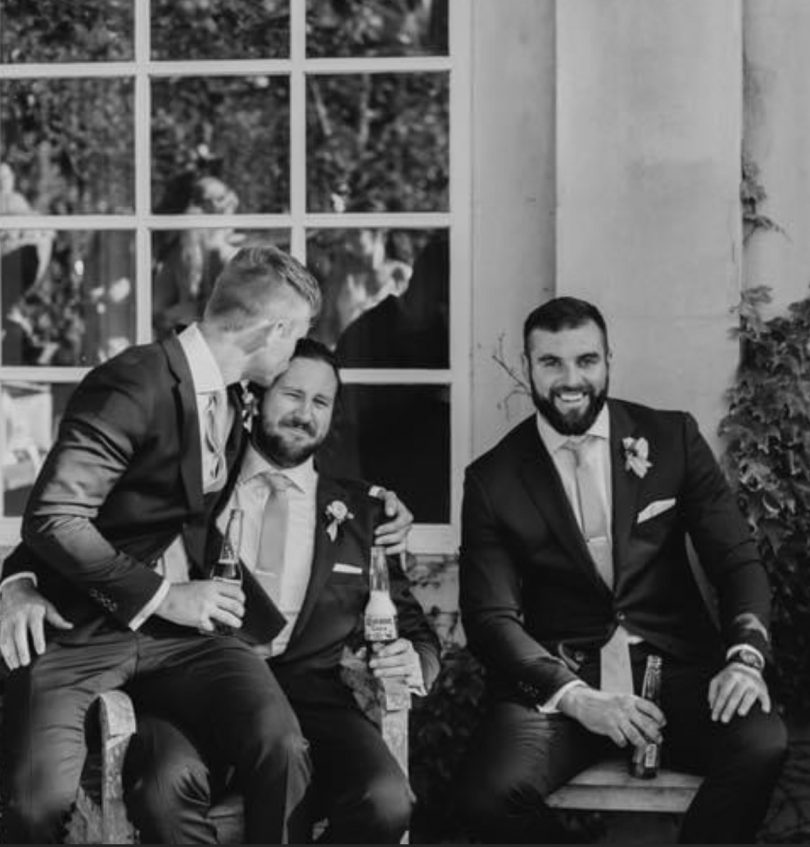 Jack Biilmann (centre) and Mark Nicholls (right) made a bet on the tattoos a long time ago, and now it’s come true. Photo: Jack Biilmann.

On Friday night, local musician Jack Biilmann’s old roommate and good friend Mark Nicholls scored a double for the South Sydney Rabbitohs in their win against the Sydney Roosters.

Almost everyone watching was unaware that this meant Jack needed to come good on a promise he’d made many years ago.

The deal struck between the men dictated that if Mark ever scored a double, Jack would get a goat and Mark’s footy number permanently inked somewhere on his body.

In return, if Jack had a song on the Triple J Hottest 100, Mark would have to get the song name tattooed on him.

A bet's a bet ?? Jack Biilmann, Mark Nicholls' old roommate, is off the tattoo parlour to get a ? with Nicho's South Sydney Club number after the big man scored a double last Friday???#GoRabbitohs ???

Both men originally hail from the country, but found themselves rooming together in 2015 in Mark’s Crace home along with Sammy Williams.

Both Mark and Sammy were, at the time, contracted to the Canberra Raiders and found themselves playing quite a lot of reserve-grade footy.

“It was Mark, in particular, who wasn’t getting much game time at all. He’s the sort of bloke whose always given everything he’s got, but he’s not the most naturally gifted athlete compared to some of the other guys,” Jack explained.

At the same time, Jack said he was “really slogging away” and while he was getting the odd play on Triple J – the Hottest 100 remained a long way off.

With all three of them in very similar positions, the bet came about as a bit of a laugh after a few beers one night – and none of them really expected it to ever amount to anything.

Originally, the tattoo was going to be of a nose – because that used to be Mark’s nickname, but after he moved to the Rabbitohs, his nickname became GOAT (greatest of all time) and the tattoo bet changed slightly.

A lot of time has passed since then, but the bet never left any of their minds.

Only a couple of months ago, when Jack and Mark caught up at a mate’s party in Sydney, Jack asked if they could change his end of the bargain to something that seemed more within reach.

“As a blues-roots artist, getting on the Triple J Hottest 100 was getting further and further out of reach,” he said.

But Mark wasn’t having any of it.

Jack Biilmann had big plans but had to cut short his tour as COVID-19 closed in around him. Photo: Jack Biilmann.

On Friday night, when Mark achieved the feat of scoring two tries in one game, Jack’s phone began buzzing with texts from other mates who knew about the deal.

“Mark has actually been scoring tries quite a bit this season, so every time he scores a try, all of us have our ears pricked up to see if the tattoo is incoming,” Jack said.

Understandably, Jack is very proud of his mate, saying the double and his performance throughout the season has really been a testament to how hard he’s worked to get where he is versus where he was when they made the bet.

And, while tattooing a goat on his body isn’t Jack’s idea of fun, he wasn’t going to back down from their deal.

With lockdowns currently inhibiting his ability to get inked, he says he’s taking his time to consider where he will get it when he can. At this stage, he thinks his foot might be the best location as it will be easy to hide most of the time, “and then in summer, it’ll be something worth talking about”, he said.

Like many musicians, Jack had to put his tour on hold after getting effectively stuck between various border closures, but he’s using his time in imposed hibernation to work on new material.

And he’s still planning to renegotiate his end of the bargain so Mark has to get himself inked soon.

This is news. Wow

Rodger Holcombe Nah you are right, let’s keep focusing on the doom and gloom of the world today and not have a laugh.

Put him on the bluesfest lineup

Jack Biilmann well there’s a challenge worth taking up

Has to be somewhere that can be shown Jack Biilmann 🤣🤣🤣

Well we’d all better vote for one of Jack’s songs then!