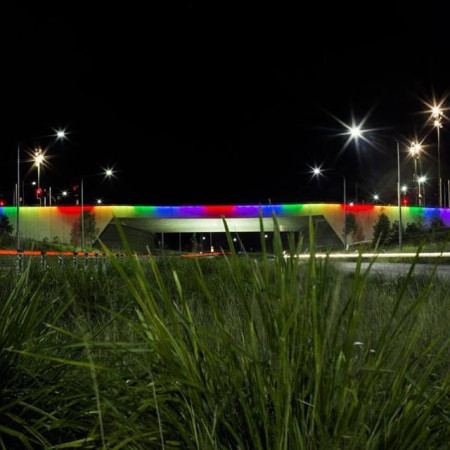 Landmarks around the capital were lit up in the colours of the rainbow flag on Monday night to show solidarity with the victims of the mass shooting in a Florida nightclub that claimed 50 lives.

At least 53 others were wounded when a gunman armed with an assault rifle and a handgun opened fire inside the Pulse club in Orlando.

Chief minister Andrew Barr tweeted: Bridges & monuments all around #CBR showing #pride and #solidarity with the #LGBTIQ victims of the #OrlandoShooting.

Earlier he condemned the massacre at the gay nightclub, saying there was “no place in any civilised society for this kind of hate”.

I attended the event at 16West last night, and a piece on it has been submitted for those interested.

While that is a nice gesture is it a smart thing to do?

While that is a nice gesture is it a smart thing to do?

16West are holding a memorial gathering tomorrow night (Wednesday 15th) at their venue (West Row, Civic) and will be taking donations for a fund organised by Pulse Nightclub for the victims families. I will be attending and will write up a report for RA afterwards.

SP Brogues - 26 seconds ago
All that landfill... View
Vickie Saunders - 11 hours ago
Not seeing a face makes one confused. Clarity pays off. View
Lorraine Marsh - 12 hours ago
Fed up seeing them all over canberra. One will do.... View
ACT Election 27

Julie Macklin - 2 hours ago
Colin Vivian, The bridge replacement was a suggestion from the Federal government, not local. Now it's not to be replaced, bu... View
Colin Vivian - 2 hours ago
Peter Mackay if they’re smart they could look at Trackless Trams at 1/5 the cost. No need for ridiculous bridge replacement... View
William Mudford - 2 hours ago
The Liberals announced the other day that they would fund their promises by encouraging people to “move back from Queanbeya... View
Property 14