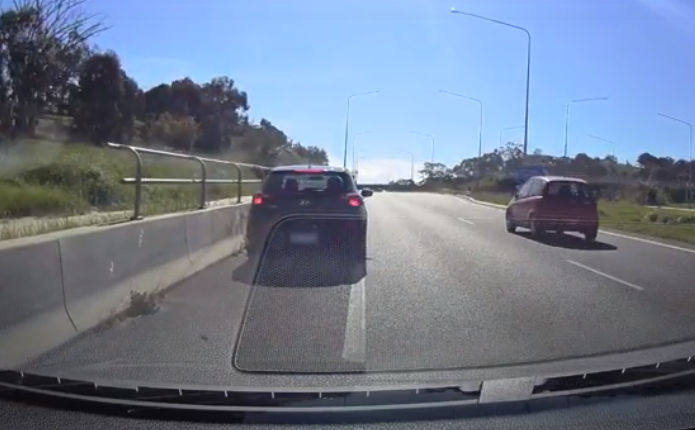 The car was pulled over after passing a police officer. The driver will be fined more than $2000. Image: Screenshot.

ACT Policing has released video footage of a 21-year-old Moncrieff man after he was detected driving with no P-plates displayed at 170 km/h on the Majura Parkway on Thursday (7 October).

After passing into the signposted 80 km/h area, police have reported the driver did not reduce his speed which was again measured at 170 km/h, more than double the limit.

“To drive so fast as a P-plate driver, or indeed any licenced driver, defies common sense,” said Detective Inspector Hofmeier.

“Provisional drivers aren’t as experienced on our roads, and if you overestimate your ability, there is no margin for error at that speed.

“What we’ve seen here is another driver who thought it was OK to treat the road as a racetrack during lockdown. What we’ve also seen here is that if you choose to speed, at any time, you could pass a police officer.

“What we didn’t see here was a crash, which would have almost certainly resulted in someone – or more than one person – being killed. There is no reason to drive that fast.”

The driver will be issued with infringements for exceeding the speed limit by more than 45 km/h, which carries a fine of $2,136 and 6 demerit points, and not displaying P-plates, which is a further fine of $250.

I was on the Monaro highway recently and a P plater passed me. Not as extreme as the example here though. I commented to my passenger they are over the speed limit and if a police car saw that, being a P plater, they might lose their licence. (I don’t know the rules on that though; only guessing.) Lights flashed behind me, and the van following me pulled around me and gave chase. They had overtaken a police van. Marked too, LOL!
I passed the two of them pulled over down the road.

Go on, Ken & Scott, go on and punish this youth for living: for the making of a mistake that you were too scared to even try. When you punish the young, you create a world more harsh and less receptive to criticicsm.
You might choose to not punish them: not for their mistake but, in their emergence, for their learning. Did you ever dare hope for change?
But, please stop imploring the youth to be better when you are part of the state which has already crossed the line. You have already committed wrongs against your peers in the name of the state. Is this the very same state that failed with climate change, unwarranted detention, deaths in custody and unaffordabilty in housing? Go on, throw your stone.
Give him/her a break, give the mantra a rest, and be less vehement about minor infringements.

“too scared to even try”?? I’d wager they are not so brain-dead as to try an idiot act like that, more like it.

Doing double the speed limit, for an extended period, is not a “mistake”, it’s a deliberate act. I’m certainly no “OMG speed kills!!” type, but we’re not talking about getting pinged by a camera for slipping ten kays over the limit down a hill here.

“punish this youth for living”. Really. Tell the family members that if he killed one of them.

Thank god this is on video.
Yes, he’s speeding at almost 120 kph. and drove straight past a police car. Whoops.
The driver, realising he’s just been caught being naughty, accelerates momentarily to the alleged speed, before quickly slowing without any high-speed pursuit.
Caught at 115 kph, not more. No pursuit, no fleeing. A decidely whoops moment.
That’s the max penalty.

That is going to suck, being you… and now its on the internet forever too… ha ha…

They seemed to follow the guy for an awful long time before pulling him over.

Surely he should have been pulled over before he passed the 80 signs?

I’m glad he got caught before someone got hurt.

How long do you think it might take to go from zero to 170 plus make up the huge gap?

Surely they know what they are doing and need to collect the correct amount of evidence to charge the fella. But, In this time of enlightenment everyone’s opinions should matter.

Besides this one, as you have no idea.