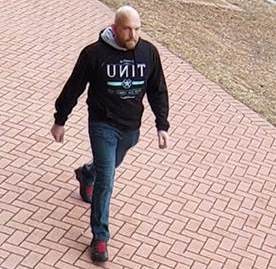 A still from the CCTV footage.

Police have released images from CCTV footage of a recent bikie brawl in the Tuggeranong Town Centre in a bid to identify those involved.

ACT Policing’s Taskforce Nemesis is seeking to identify the six men involved in the fracas that took place on Anketell Street on Friday, 6 July 2018.

ACT Policing said that about 3:20 pm police received reports of an altercation involving criminal gang members. Taskforce Nemesis is investigating the incident, which is suspected to be a result of ongoing tensions between criminal gangs. 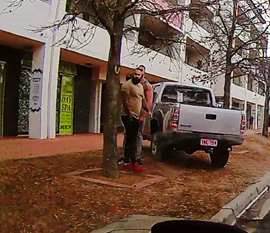 It said CCTV footage from a nearby business partially showed the incident and depicted three men.

The first man is described as being Caucasian in appearance, with a beard and a shaved head. He was wearing a black hooded jumper, jeans and grey and red sneakers.

The second man is described as being Pacific Islander in appearance, with short black hair and a black beard. He has sleeve-style tattoos on both arms and was wearing a tan T-shirt, dark pants and red sneakers.

The third man is described as being Caucasian in appearance, with short dark hair and a large tattoo on his left pectoral muscle. He was wearing jeans and black sneakers. 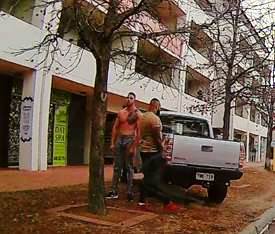 The three other men involved are described as being Pacific Islander in appearance with solid builds. They were seen fleeing Anketell Street in a black Subaru WRX sedan.

Police are urging anyone who may have any information or witnessed the altercation, including the identities of the six men, to contact Crime Stoppers on 1800 333 000, or via the Crime Stoppers ACT website.

I have to wonder what it will take for Minister Gentleman to concede that he isn’t properly managing the Bikie situation in Canberra.

He keeps saying we have the appropriate laws in place and that he and Police are handling the situation.

I sincerely believe ACT Police are doing their job as properly as possible, but Surely every bit of factual and anecdotal evidence is showing that Mr Gentleman isn’t doing his job as Police Minister effectively.

If these events happened at the Legislative Assembly building, I bet the Minister would suddenly take action. Unfortunately the incidents are happening in the outer Suburbs not in the areas the ACT Government care about.

Adele Craven - 3 hours ago
Renee Mae RiotAct has had lots of opportunities to understand and present up-to-date info, but have refused to - instead cont... View
Food & Wine 14

Dom Polegubic - 4 hours ago
Enjoy an evening with Andy Bernal Saturday the 19th of June at the Australian Croatian Club in Turner. Includes dinner and a... View
Opinion 5

Marisa Navarro - 7 hours ago
Linda Navarro i’ll just keep them! View
Bek Clark - 8 hours ago
Lucinda it depends on the category; and while it was a different specialty I can confirm, private specialist consult with a d... View
Paige Johnson - 9 hours ago
Why though? Shortage of staff/surgeon? I’m genuinely curious to know why. View
Community 3

@The_RiotACT @The_RiotACT
The ACT is looking to diversify the economics of the CBD as the work from home culture means fewer workers in city offices https://t.co/J1DoofRqD5 (6 hours ago)