ACT Policing is investigating the theft of a distinctive Tom Roberts artwork from an apartment in Narrabundah.

The artwork measures approximately 60cm by 33cm and is contained within a 50cm thick black hardwood frame. It is a 19th Century portrait of former journalist and NSW politician Andrew Garran. The artwork is valued at between $80-100,000 and has sentimental and historical value. It has always been the property of the Garran family.

This artwork is distinctive and would be recognisable by art dealers and Tom Roberts specialists. 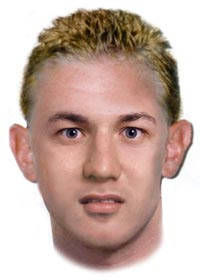 ACT Policing has released a forensic facefit of one of the male offenders who threatened and robbed an 18-year-old man on Sunday morning (March 1) at the Kippax shops. The victim had withdrawn money from the ATM at the shops and was nearing his home on Denny Street in Latham about 11.50am when he approached by two males. One of the males threatened the victim with a black-handled knife and demanded his wallet. The victim took out his wallet and threw it over his backyard fence, then ran around the side of the house to recover it. However, in that time, one of the males had already jumped the fence and stolen the wallet. One of the male offenders is described as Caucasian, about 18 years of age, between 5’9” – 5’11” tall (175-180cm) tall, with olive skin, short blond hair, an athletic build, and wearing a light blue short-sleeved T-shirt and dark-coloured shorts. The second offender is described as Caucasian, about 18 years of age, between 5’9” – 5’11” (175-180cm) tall, with olive skin, dark brown hair, and wearing a dark short-sleeved T-shirt and dark shorts. He had a grey-black hooded jumper over his right shoulder.

(only there’s no facefit provided, in fact we’ve been having to rely on Crimestoppers because the only person in the AFP media unit who can work the interwebs appears to have been away on hols since 25 February. – UPDATE: Activity has returned a day later and the facefit is now available)

Slobodan Paunovic - 21 minutes ago
Marc Edwards don't worry about it, can only be more expensive and some sort of public robbery...they need funds for parties a... View
Tom Adam - 3 hours ago
Jorge, yes I was basing my comments on the current claim. View
Jorge Gatica - 3 hours ago
Tom Adam it not 100% renewable just 5% View
Property 6

Yvonne Johnstone - 2 hours ago
Driving on the GWH on the way to Mudgee... View
Motoring 37

Stephen Fallon - 2 hours ago
I'm sure every one of these people consider themselves good drivers. If we put a fleet of unmarked police cars on the roads,... View
Chris Hart - 4 hours ago
Carol Ranft I’d say speed limits are a thing because most people are incapable of driving properly at slow speeds let alone... View
Carol Ranft - 15 hours ago
Michael Grinceri It would help if they advertised why a speed limit was chosen View
Food & Wine 23

George Prasad - 4 hours ago
I think it more comes down to values than hiding your wealth from your kids. We're a close knit family that doesn't focus on... View
Karen Feng - 4 hours ago
Kasra Mn That is a good point. When my sister was much younger she was surrounded by friends that is more economically disadv... View
Karen Feng - 5 hours ago
Growing up me and my bro didn't have much. By our teen years our family was slightly well off and my mum likes to show off. M... View
Community 37

John Hamilton - 4 hours ago
The wear and tear on roads is nothing compared to the wear and tear that cars and trucks produce. So no, don't start taxing c... View
News 11

Ben Norris - 6 hours ago
Can we we move the Northbourne flats junkies out of molonglo to whitlam now please? We've had our turn of non stop burglary.... View
Patrick Harrington - 13 hours ago
I'm sure the residents of Wright and Coombs will love a shopping centre in Whitlam. If Whitlam can actually get a shopping ce... View
Community 12

Daniel Duncan - 15 hours ago
Clinton good luck with that. View
John Sykes - 16 hours ago
Peter Major that would be an interesting outcome. Diesel rebates to mining and agriculture allow them to function against int... View
show more show less
*Results are based on activity within last 7 days

Things are about to get a whole lot cooler in Dickson with the opening of Spilt Milk Gelato Bar today...
Best of Canberra 20

From a humble mid-afternoon working class pick me up; high tea evolved to become an elegant afternoon soiree infamous amongst...
News 53

Prisoners have painted a depressing picture of life inside Canberra's Alexander Maconochie Centre (AMC), saying current conditions are contributing to...

@The_RiotACT @The_RiotACT
Our long and complicated relationship with grass is celebrated at @_CMAG_ where The Blade: Australia's Love Affair with Lawn has opened https://t.co/w0hlDOGwyc (1 hour ago)

@The_RiotACT @The_RiotACT
The ChooseCBR website issues have been fixed, but you may need to get in quick to access your discount vouchers before the $500,000 is exhausted https://t.co/NujCZ2Vrqp (3 hours ago)