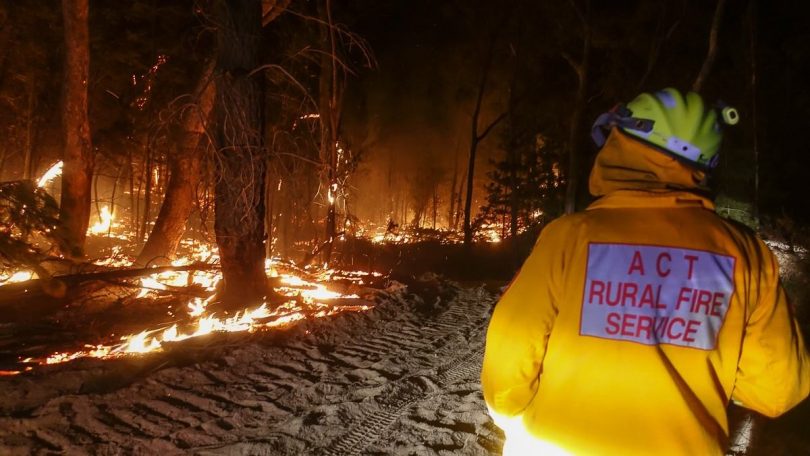 Firefighters battled the blaze at Pierce’s Creek which was started by a burnt-out car. Photo: Supplied by ACT ESA.

ACT Parks and Conservation rangers have raised their concerns about the “worrying trend” of burnt-out cars in the ACT’s national parks and reserves after a car fire started the Pierce’s Creek bushfire on the outskirts of the nation’s capital.

According to ACT Parks and Conservation manager Brett McNamara, Pierce’s Creek and other national parks have become a popular spot for lighting dumped vehicles in the last couple of years and he is concerned about the trend.

“There is an emerging trend of an anti-social type of behaviour in our parks and reserves which includes dumping of material, blatant vandalism and now we are starting to see vehicles being driven out to these remote locations and not just dumping them, but setting them alight,” Mr McNamara said.

“When I started as a ranger almost 30 years ago, it was unheard of. Now it is a regular occurrence and in the last three years that there has been a significant increase in vehicles being dumped and then being set alight.”

In what Mr McNamara described as “tinderbox conditions”, he believes if the trend continues throughout the summer it could potentially have catastrophic impacts on the community.

“When I heard the call come through on Thursday afternoon, I must admit my first thoughts went to it’s probably a stolen vehicle,” he said. “The trend of vehicles being dumped and set alight is a huge concern for us.”

Mr McNamara believes many of the arsonists do not comprehend how much damage they are causing to the beautiful national parks and are unaware their actions are putting the community at risk.

“I don’t know if they are recording setting a car on fire for glorification or satisfaction to share it on social media, who knows why,” he told Region Media. “I would love to have a conversation with these people and ask them what went through their mind.”

ACT Parks and Conservation said they are continuing to work with the ACT Policing’s dedicated rural patrol unit to stop the trend but is calling on the Canberra community to be their eyes and ears.

“We can’t cover all the areas so we are calling on the Canberra community if they see anything suspicious, jot down some details and report it to ACT Policing,” Mr McNamara said. “That little bit of information could be the missing piece of the jigsaw puzzle that can make a difference between prosecution and just another vehicle being dumped.”

ACT Policing has revealed that two hours before the bushfire tore through Pierce’s Creek, police attempted to pull over a stolen Toyota Hilux Workmate, which they believe was used to spark the blaze.

Police are urging anyone who witnessed or may have dash-cam footage of the blue Toyota Hilux Workmate with NSW registration to contact police on 131444 or Crime Stoppers on 1800 333 000, or via the Crime Stoppers ACT website.

Our government officials have no hesitation in using fixed, mobile and point-point speed & traffic cameras all over town, to record our movements and make a buck. Perhaps it’s time to install a few covert units on our rural roads – you’d identify these repeat vandals, thieves & arsonists in no time at all.

More likely:
Police know who they are.
There is no point catching them as we have a slap on the wrist justice system.
Police are too short staffed anyway.

If they are caught the aren’t named and shamed because they fit in a particular demographic/minority profile.

I would rather name and shame: put the onus on the parents to raise decent kids and not vandals.

Just lock them up. And we need a 3 strikes law so that repeat offenders are locked up forever so bad genes can be gradually removed from the gene pool.