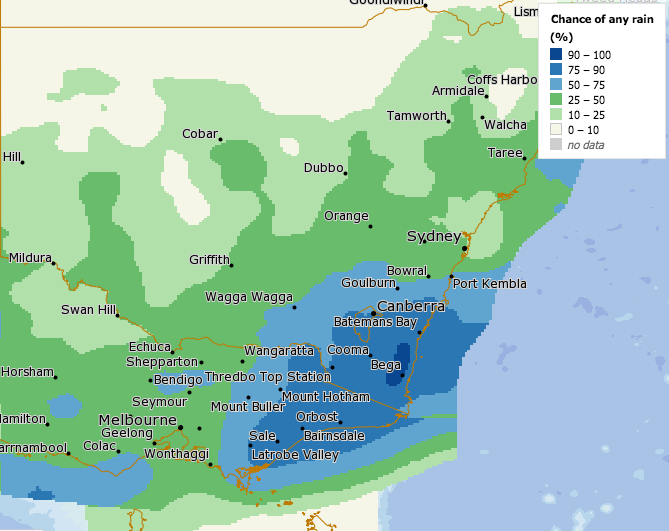 The forecast rainfall for the region on Saturday (8 August). Image: BOM.

The already-drenched NSW South Coast between Batemans Bay and Eden will cop the brunt of widespread rainfall and possible flooding this weekend, with more than 200 mm expected between this Friday and Sunday (7 and 9 August).

Even areas that have experienced serious rainfall deficiencies in the Cooma-Monaro region are forecast to see rainfall of more than 100 mm over the weekend.

In Canberra, between 50 and 70 mm of rain is expected to fall from Friday morning until Sunday.

It follows an icy blast of snow and below-freezing temperatures in Tasmania, Victoria, southern NSW and the ACT earlier this week.

Parts of NSW and Victoria saw their lowest temperatures in a few years on Thursday (6 August). At Thredbo Top Station, -9.3 degrees was recorded and Perisher dropped to -8.7 degrees. The Snowy Mountains received more than 15 cm of snow this week with more to come. 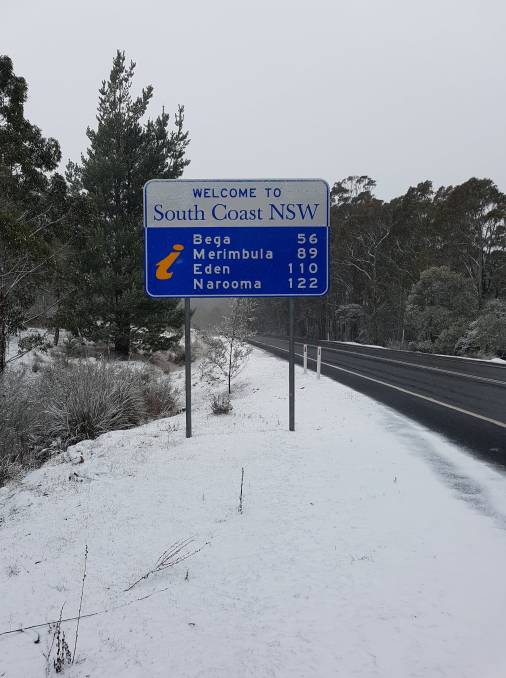 Snow at the top of Brown Mountain south of Bega earlier this week. Photo: Robert Jennings.

Meteorologist with Weatherzone Ben Domensino said the rain is associated with a low-pressure system that has moved across Australia from west to east this week, producing widespread rain in South Australia, Victoria and southern Queensland.

“Temperatures will drop several degrees below average in parts of eastern and south-eastern Australia as the rain, cloud and cold air moves through. The daytime temperature could be 10 degrees cooler than usual for this time of year in some areas,” Mr Domensino said.

“This system will also bring snow to the mountains in south-eastern Australia, possibly heavy snow in parts of southern NSW, particularly on the eastern side of the ranges.

“Widespread totals of 20 to 40 mm are likely across large areas of South Australia, Victoria, NSW and southern Queensland. Heavier falls of around 50 to 100 mm are possible in south-eastern NSW and eastern Victoria.” 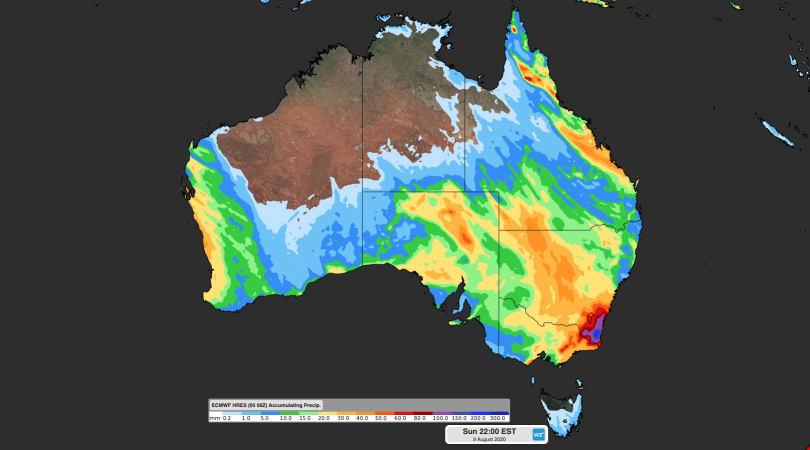 There will be widespread rainfall up to this Sunday, according to this forecast model. Image: ECMWF-HRES.

Forecasts show that heavy rain and thunderstorms are likely to occur during this weather event and people are advised to keep up to date with the latest warnings in their local area.

Canberra and the surrounding region should see the first showers on Friday morning before they become heavier during the day. Up to 30 mm of rain will fall on Friday, with between 5 and 10 mm expected on Saturday. Rainfall will continue on Sunday, with up to 25 mm expected, providing another boost to Canberra’s catchment areas, which are currently sitting at almost 60 per cent of capacity.

There will be no relief from the cold, though, with a maximum of just 8 degrees forecast today, and maximums of 13 and 11 on Saturday and Sunday.

On the NSW South Coast, the Bureau of Meteorology has issued a flood watch for the Moruya and Bega Rivers from Saturday, with moderate flooding expected.

Catchments in the area are likely to be affected by flooding as they are currently near saturation following rainfall in the previous weeks.

The forecast rainfall for all areas between Batemans Bay and Eden is for up to 50 mm of rain on Friday, with another 80 to 90 mm on Saturday and up to 70 mm on Sunday.

The weather system will move off the coast and into the Tasman Sea on Monday, bringing more large waves to the South Coast. Wave heights are expected to be between 4 and 5 metres. Previous large swells have already caused severe erosion on the entire NSW coastline.

And if you were hoping for a reprieve, the long-range forecast for the next seven days shows another complex low-pressure system will move into NSW and the ACT from about Wednesday next week.