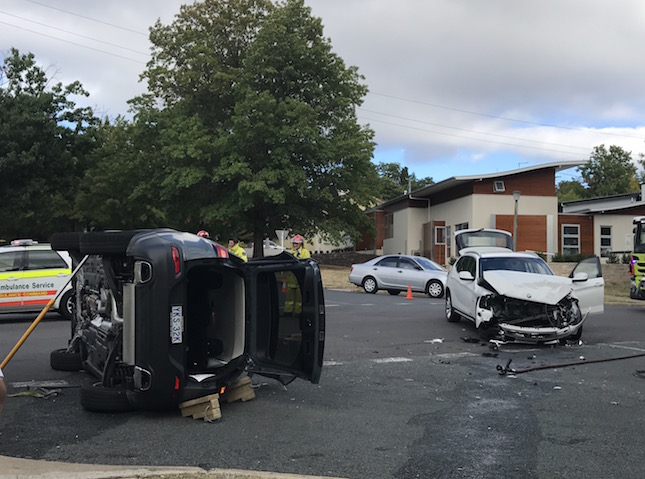 Both lanes of Caley Crescent in Narrabundah are closed this morning as emergency crews treat two drivers and their passengers following a two-car collision in which one vehicle rolled at the intersection of Caley and Sprent Street.

Several fire crews, police teams and two ambulance vehicles converged at the intersection near Narrabundah College shortly after the accident which occurred at around 9am this morning. 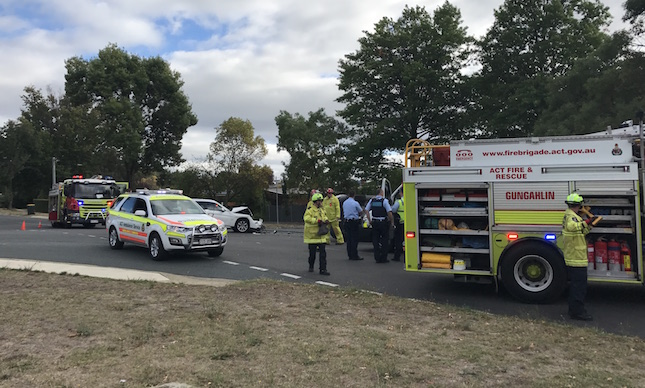 While the RiotACT was at the scene, the driver and passenger of a white BMW involved in the crash returning to their vehicle to collect belongings while a man and woman who had been travelling in the grey SUV that rolled following the collision remained seated on the curb as paramedics assessed their injuries.

A witness told the RiotACT she had been driving eastwards along Caley Crescent when the accident occurred just up ahead. She pulled over and offered her assistance, and was relieved to discover no one appeared to be seriously injured.

The accident had happened extremely quickly, she said, but it was her recollection that the two vehicles had collided as the grey SUV travelling south along Sprent Street moved to turn left onto Caley while the white BMW, travelling from the opposite direction down the hill, attempted to turn in the same direction.

Am I the only one to observe an increase in vehicle rollovers in suburban streets in recent times? Way back when, in a distant past and place, I used to be a member of a RFS brigade that had traffic accident responsibilities and can barely remember a rollover. People were so much more considerate then and kept the roof up and rubber down, making it so much easier to cut the battery cables and remove the roof so the ambos could cart the the damaged flesh and bones away.

In my view, rollovers are probably occuring because the near ubiquitous SUV has a high centre of gravity and the drivers do not understand basic physics. Doing lipstick, eating toast, slurping coffee and answering the phone probably also contribute. Throw in a bit of inappropriate speed and over you go.

Why do I care? Insurance works on a risk pool. And my premiums keep on going up. Besides, going to funerals or visiting hospital emergency departments are things I seek to avoid.

@The_RiotACT @The_RiotACT
Ainslie Bull has been crowned winner of the 2021 Danielle Cleary Events Model Host Search, and will now be mentored as she continues her modelling journey https://t.co/3PYLNf3FRt (27 minutes ago)