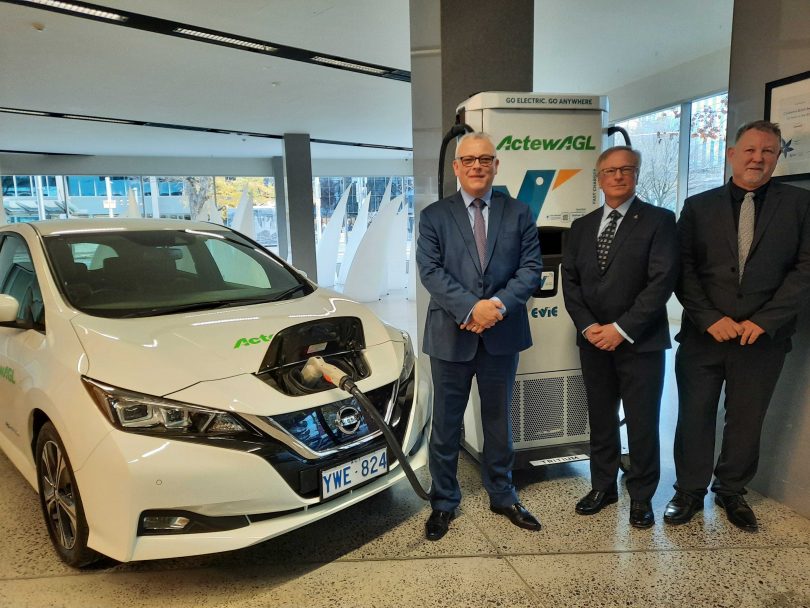 I’d noticed what looked like a charger on the wall of my neighbour’s carport but hadn’t spotted the car properly until one morning recently when it reversed out, clearly showing the T on the hood.

Yep, my neighbour has a Tesla, in plain old, but upwardly mobile these days, Rivett.

Last weekend at the local shops I saw a Nissan Leaf in the car park.

According to the Australian Electric Vehicle Association, there are 1038 of the new-tech cars running around on ACT roads. They are literally part of a quiet revolution in transport that is becoming more visible, albeit slowly.

I drove a Nissan Leaf earlier in the year, and I’d gladly swap my ageing internal combustion engine runabout for an electric version tomorrow.

Just give me a bit more range and get the price down.

The change is happening, but more slowly than in other parts of the world. Nevertheless, the demand is there, charging networks are being established, and governments at state level are paving the way with incentives and assistance.

This week local energy provider ActewAGL and Evie Networks announced a deal to expand the number of charging stations in the ACT, based on the demand here. This is independent of ACT Government moves for 50 new charge points.

If only the Federal Government would get on board and create the policy settings that would boost supply so the market could become more competitive and create a viable second-hand market.

The sticking point for car manufacturers is that without CO2 reduction targets or fuel-efficiency standards, something other countries have had for years, it’s more economical to focus on markets where they can benefit from carbon offsets.

That means the supply of electric vehicles is limited and prices stay high, despite the hunger for change. It also means Australia risks becoming a dumping ground for ‘dirty’ ICE vehicles while the rest of the world drives into the new era.

In its Future Fuels discussion paper, the Federal Government is focused on co-funding charging infrastructure with the private sector, which is great, but it hasn’t embraced efficiency standards or EV uptake targets, the other side of the equation.

It also hasn’t established any incentives or exempted EVs from the luxury car tax, although it has raised the threshold.

As a result, many potential buyers are holding off until there is more choice or opting for hybrids, sales of which have taken off.

Nonetheless, people with the means and the commitment are still buying EVs. We’re just not seeing as many or the variety of makes as there should be.

READ ALSO: As the AWM expansion shows, community consultation may be nothing more than lip service

At this point, it’s worth remembering why we need to switch to zero-emission vehicles, and it’s not just for cleaner air.

The world needs to curb its greenhouse gas emissions urgently to avoid the catastrophic impacts of global warming, and transport is a big source of emissions.

The Federal Government insists it accepts the science and is committed to reducing emissions, but it seems the politics of climate change and vested interests are keeping it from taking the kind of action that would be meaningful – where the rubber hits the road.

Without that policy certainty, Australian motorists will miss out on the new generation of vehicles that the manufacturers are committed to as they wind down the production of ICE cars, and transport emissions will not come down as they must.

The Federal Government often talks about choice and how it’s not about to force people to give up their petrol or diesel cars.

Well, how about increasing the choice for those of us who want to drive a superior, cleaner and less costly car to run, and taking the imperatives of climate change seriously?

The old Global Warming scare. I’ve been on this earth for over 60 years. For the alarmists banging on about how hot the summer of 2019/20 was, well the summer of 2020/2021 was mild. We had water shortages in the early 2000s, now we don’t. These patterns have repeated over my lifetime.
Buying an EV is not going to change temperatures. The manufacturing process is still the same as for an ICE vehicle. You still need to transport it by fossil fuelled ships and trucks to the dealership. They still need servicing, they still need brake components, shocks, radiators (for the battery cooling).

Me too, but I prefer to believe the science, instead of your anecdotal stories. But thinking anecdotally, the winters have been getting milder. When I first came to Canberra and living in my first house, for many years I would regularly scrape ice from inside my window in the mornings to see out. In later years this ice stopped happened. Same house.

However, researched science is better than our little anecdotal stories.

There’s science and there’s follow the money science, like the great scientific mind of school drop out, Greta Thunberg, along with her many peer reviewed articles. However, since this story is about EVs, I’d buy one when they are under $55k, can get 700km+ range and take 5 minutes to recharge.

@maya did you receive your free roof insulation from that kind Mr Rudd ? Perhaps now with this insulation your hoose is a little warmer… perhaps.

The “science” is yet to be proven. The main “tool” they have is computer modelling which can be contrived and most scientists qualify the predictions with a big “may”. No link between carbon dioxide and (imperceptible) global warming has been made in a laboratory. There have been years of dud predictions.

TheSilver - 41 minutes ago
There is literally no good evidence that "social distancing" or "wearing masks" can reducing risk. At best you can say we don... View
phydeaux - 1 hour ago
Quite so. To put some rough numbers on it, 2017 was a peak flu season in which near 1200 people died, but the 4-year average... View
chewy14 - 2 hours ago
Can't remember when anyone said anything about compulsory flu booster shots? We are talking about Corona Virus, which is sign... View
Community 1

@the_riotact @The_RiotACT
#Gungahlin's proposed #tennis centre is a step closer with a consultant hired to come up with a preferred design for the facility https://t.co/7htQ6Obh5D (44 minutes ago)