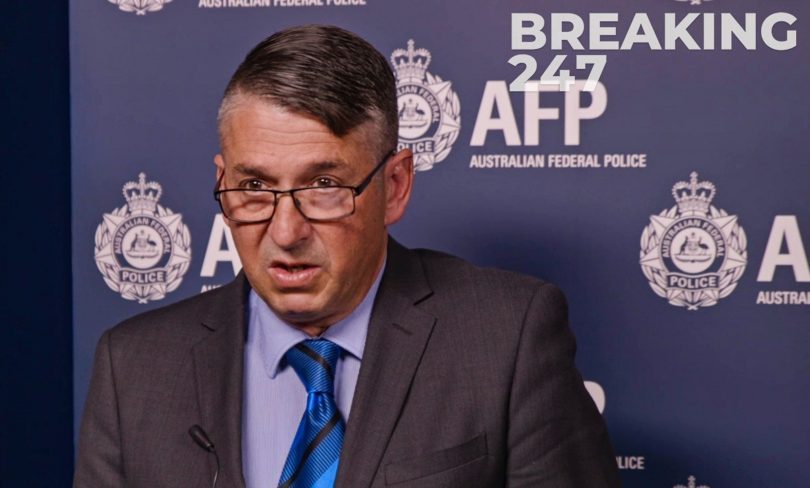 ACT Policing are taking the “unusual step” of calling for anonymous witnesses to two linked aggravated robberies in 2010 to come forward as police look for further evidence in their ongoing investigation.

Around 10:40 pm on 14 June 2010, two male offenders armed with knives threatened a Red Rooster Wanniassa employee outside of the store, ordering them to re-enter the store, where a sum of money was stolen.

Shortly after this incident, a member of the community called Crime Stoppers and provided information about the incident.

Around 11:30 pm on 16 August 2010, three male offenders entered the Lanyon Vikings Club in Conder. One man was armed with a knife and another was believed to be armed with a small silver handgun.

The men threatened an employee and forced him to access an internal office, where a quantity of cash was stolen. Another separate sum of money was stolen from one of the club’s tills.

In the days after this incident, information about a vehicle possibly linked to the robbery was provided via the Crime Stoppers website.

Last year, police identified a ‘critical’ link that linked these two incidents with 12 other incidents that took place in 2009, 2010, 2016 and 2018. In August 2018, a 25-year-old man and a 29-year-old man were charged for their involvement in the historical aggravated robberies and burglaries that took place over the past decade.

Detective Station Sergeant Harry Hains is now calling for the witnesses to the robberies that provided information in 2010 to come forward after their information was assessed against the “ongoing, complex investigation”.

“Today we are taking the unusual step of asking the two people who provided information regarding these two robberies to come forward,” he said. “We understand the significant amount of time that has passed between when these crimes have been committed and now.

“However the people who provided this information will know they did so, and we believe they can provide vital additional information for an ongoing investigation.

“We acknowledge that the provision of information via Crime Stoppers can be anonymous, however, we are issuing a call for these people to reconsider their position and make themselves known to us.

“We are really urging you, the people who provided this information, to contact Crime Stoppers and provide contact details.”

Detective Station Sergeant Hains said the case is currently before the court, but he would not rule out more people being charged with the offences.

“ACT Policing takes these types of crimes of violence against people in the community very seriously and we will go back as long as it takes to put the pieces of the puzzle together and present offenders to the court,” he said.

“We have no indication that the people who contacted Crime Stoppers are in any way involved with these offences. I would like to assure them that we are not looking at them as being connected with this offence. We are merely looking at them as witnesses.”

Police would like the people who supplied information for these two incidents to come forward and are urged to contact Crime Stoppers on 1800 333 000 quoting reference number 6191988.

Michael Hill - 2 minutes ago
Great in hero green too…. View
Paul Leins - 15 hours ago
Chinmoy Misra so you're saying *you* can't maintain a reasonable speed in built up areas without some kind of ridiculous urba... View
News 25

Ramon Montero - 48 minutes ago
I do remember him when started arbitrate football, indeed very polite and educated a young person. I had the privilege to mee... View
Kacey Butterworth - 12 hours ago
I feel extremely privileged to have had Ben as a mentor, teacher and year co-ordinator throughout my high school years. He ta... View
Annamaria Zuffo - 15 hours ago
Fantastic Ben. Lucky kids and us for knowing you. View
Public Sector 3

retep - 14 hours ago
*sourced. Geez it's a rough day.... View
retep - 15 hours ago
Applause. Thanks for your efforts. We too try to alleviate our energy use in similar ways. Also agree with your observations... View
News 4

@The_RiotACT @The_RiotACT
Zapari wanted a standout building for Woden. The result is The Shard. Check out the penthouse views https://t.co/wfAtM4OT2m (51 minutes ago)