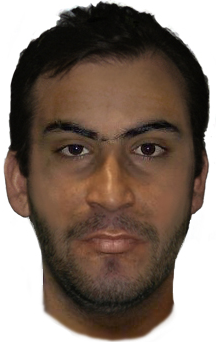 ACT Policing has released a face-fit of a man in relation to an incident where a 13-year-old boy was approached by a man in Kambah on Wednesday (May 14).

About 3.50pm a 13-year-old boy was walking home from the bus stop on Livingstone Avenue between the two turnoffs to Cutbush Street.

As the young boy walked along the footpath towards his house he noticed a vehicle parked on the side of the road. The car had its hazard lights on at the time.

As the boy walked past the car, a man approached him and asked him for directions to The Canberra Hospital. The man attempted to coerce the boy by repeatedly asking him to get in the car. The young boy refused and walked off.

The man is described as aged in his mid-40s, light brown skin, possibly of Indian appearance, short black hair with almost a full beard. He was wearing a long sleeve white shirt.

The vehicle is described as a small white 5 door hatchback, late 90’s to early 2000s model. It has black stripes on the door trims, down the length of each side of the vehicle.

Police are urging anyone with information who can assist in identifying the man or the small white hatchback to contact Crime Stoppers on 1800 333 000, or via www.act.crimestoppers.com.au. Information can be provided anonymously.

Ben Keaney - 5 minutes ago
Also if they are not in the numbers that the anti-brumbies say, what do you think a maximum brumby population should be? Sure... View
Ben Keaney - 11 minutes ago
Di exactly how do brumbies keep the fuel load down? Do they eat fine forest fuels such as sticks and leaves? Or Perhaps its t... View
Di Hunter - 4 hours ago
Jackie Hattingh it’s actually proven that they don’t and it is also proven that they are not in the great a numbers as th... View
Property 18

Beck Bianco - 20 minutes ago
Probably because Canberra is no longer affordable so people move to drivable towns outside of Canberra View
Michelle Preston - 41 minutes ago
Property prices in Yass are over priced. View
Elyse Crawford - 1 hour ago
Amanda Adams still the same cycle, those tenants would then be homeless. View
News 7

@The_RiotACT @The_RiotACT
Cavalry mascot Sarge is turning up the heat on his annual 10 km walk to raise $10,000 for Lifeline in Canberra. Find out how you can help https://t.co/CktjV9PbUV (39 minutes ago)